The Maltese Community Council of Victoria, Inc. (MCCV) is a non-profit organisation which provides social, cultural, recreational and welfare support to all members of the Maltese Community in the State of Victoria. The MCCV is an umbrella organisation for some thirty Maltese associations which are currently affiliated to it.
The MCCV was established on Saturday 6 July 1958 on the initiative of the Austral-Malta Association. There were one or two delegates from the Austral-Malta Association, Maltese Settlers Association, Malta Migrants Catholic Association, Melita Social Club, Melfare Club, George Cross Soccer Club, Melita Soccer Club, St. Fidelis Soccer Club, Ex-service Association, 17th Melbourne 1st Malta Boys Scouts Group, Star of the Sea Dramatic Company, and the monthly publication “Malta”.
The first meeting was held in St. Mary’s Mission House in Parkville, Melbourne, which was the home of the priests of the Missionary Society of St. Paul (MSSP). The Superior of the Order and Spiritual Leader of the Maltese community in Melbourne, Fr. Onoratius Galea, MSSP, generously made the venue available for the meeting. Together with several other priests of the Society, Fr Galea was among those who strove for the establishment and the success of the MCCV. Among those present at the inaugural meeting were the High Commissioner of Malta, Captain George Stivala OBE who attended as an official observer and was elected Patron by acclamation. The agenda for the first meeting included the selection of a name for the new organisation, the establishment of a Maltese cultural and recreational centre, a Maltese radio programme and general elections. 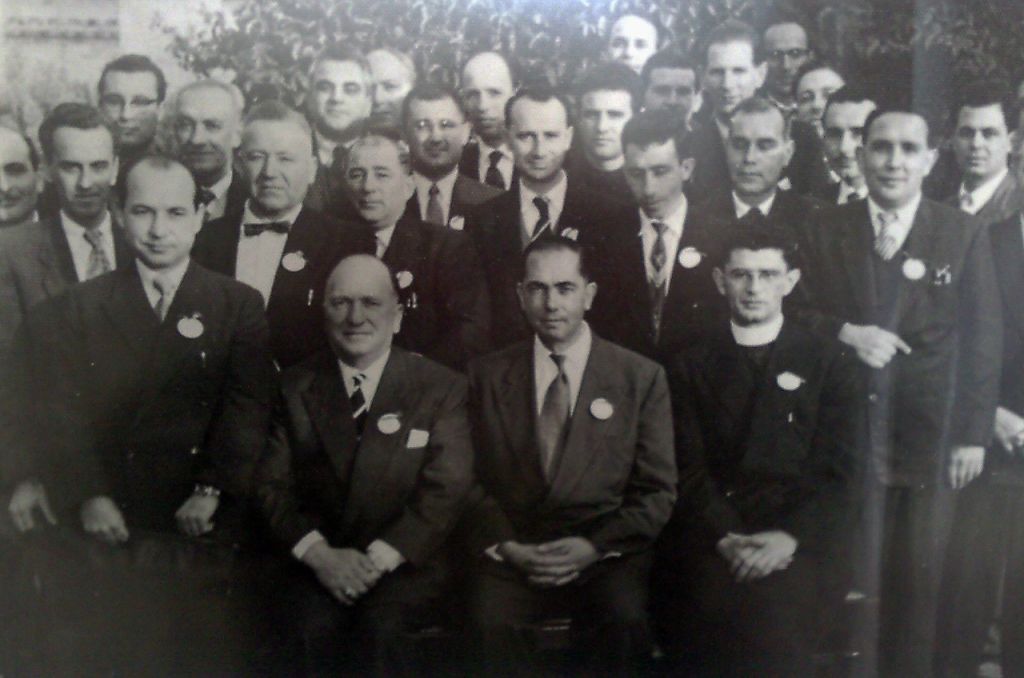 The foundation members of the MCCV in 1958.

The MCCV Ladies’ Auxiliary was formed in 1976 with Mrs. Carmen Vella as the first President, Mrs. Lillian Calleja as Vice-President, Mrs. Terry Borg as Secretary and Mrs. Stella Galea, Treasurer. The other members of the first committee were: Mrs. Helen Soler, Mrs. Lina Stafrace, Mrs. Maria Briffa, Mrs. Irene Bonello, Mrs. Josephine Briffa, Mrs. Carmelina Camilleri, Mrs. Terina Camilleri, Mrs. Sandra Borg and Mrs. Connie Curmi. There were a number of other helpers, such as, Mrs. Lina Borg, who volunteered their time in those early days. In fact, over forty ladies attended their first meeting.
The Ladies Auxiliary was to raise funds for the MCCV. They achieved this aim with their individual and collective hard work and determination. In the process, their members provided valuable assistance to the more vulnerable sections of the Maltese community, particularly the elderly. They organised their own functions and also contributed and assisted in community events such as the Annual Fête. 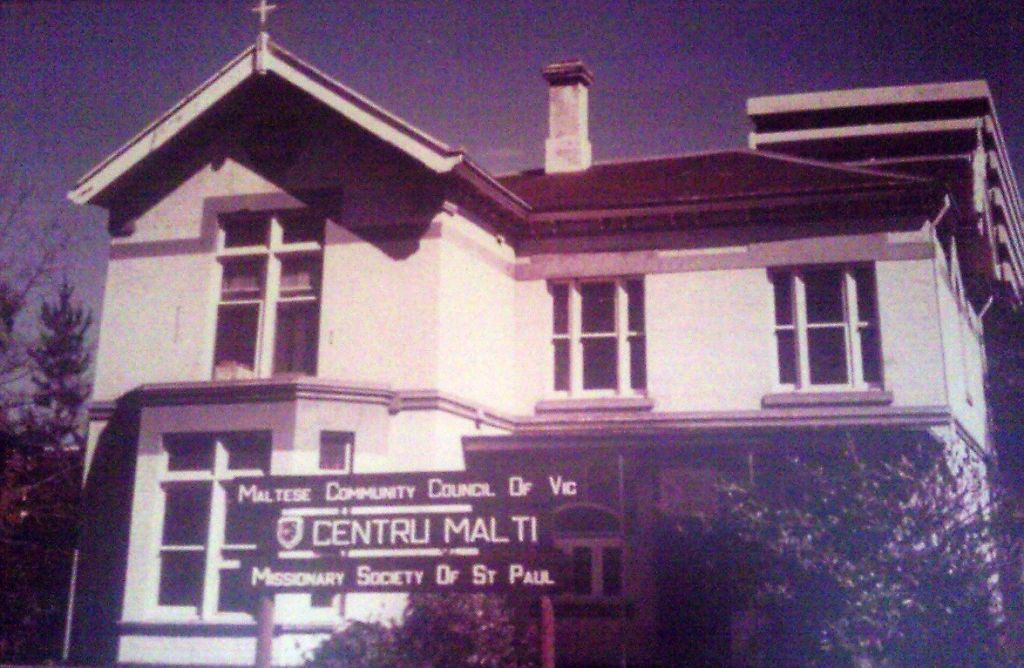 The old Maltese Centre in Parkville.

The building of the Centru Malti in Parkville was the next most important project for the MCCV and its opening in December 1983 constitutes one of the most important landmarks in the annals of Maltese settlement in Victoria. It galvanised the various organisations forming the Maltese community and gave them a focal point and a sense of community bonding, which may have been lacking before. It gave them a stronger sense of purpose.
The building of a cultural and recreational centre for the community of Victoria was one of the agenda items for the first meeting of the Maltese Community Council of Victoria held on Sunday 6 July 1958 at St. Mary’s Mission House. This dream was discussed on various other occasions.
On 13 December 1968 the President informed the committee that the first appeal for a building fund would be launched on the 20th December on the occasion of the Xmas party organised by the Community Christmas Committee. A plan for loans of $500-$800 by the affiliated associations would be proposed.

An Open Forum between the MCCV and the Maltese associations in Victoria was held at the N.O.W. Ethnic
Centre in Coburg on 24 October 1976. There was a substantial response to the call made through public announcements in The Maltese Herald and on the Maltese radio programme.

Mr Victor Borg, President of the MCCV, who chaired the forum appealed for greater unity among the community. He invited suggestions on how to improve things as well as criticism in an open discussion with any fear.
It was at this forum that Fr. George Scerri, the Provincial of the Missionary Society of St. Paul, announced that the leaders of the MSSP had decided to make its property in Parkville available to the Maltese community. He said that the project contemplated that the priests would keep a small part of the land on which to build a chapel and for their use in the delivery of spiritual service. The rest of the land would be used for the construction of a Maltese Centre with facilities to cater for the needs of the Maltese community in the fields of education, social welfare, sports and so on. 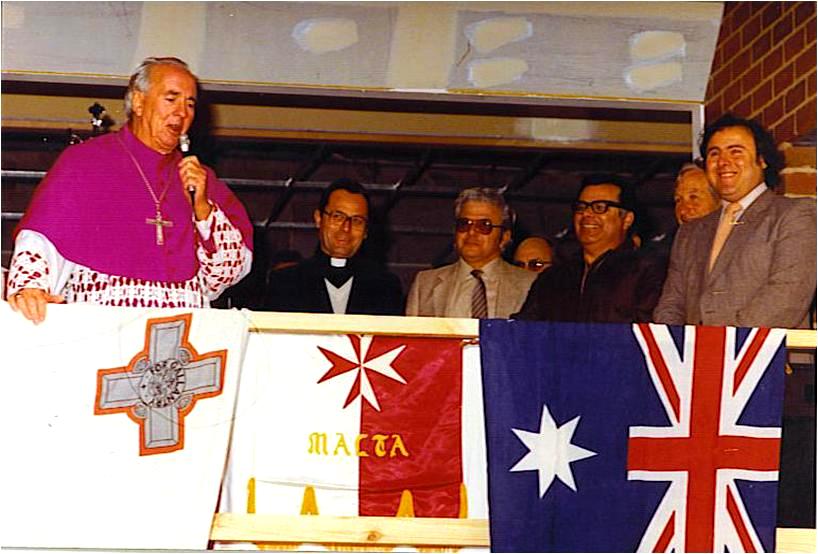 The Foundation stone for community centre was presented at the council meeting held on 4 February 1981. It is the work of the Maltese sculptor Mr. Marco Montebello. It was laid in September 1983. 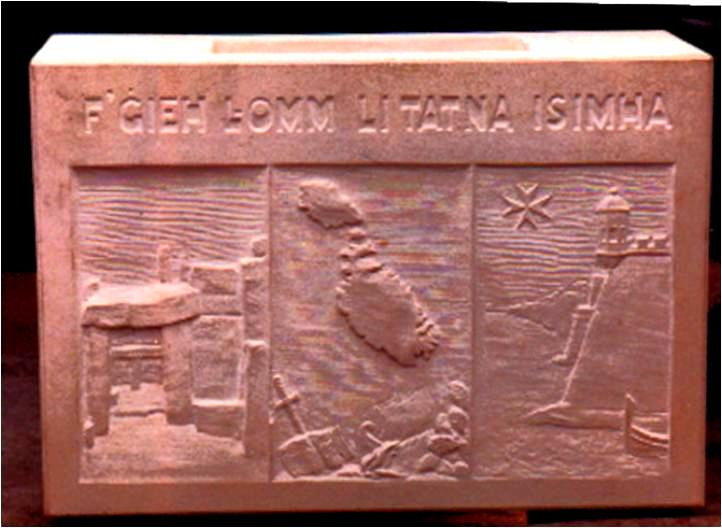 The foundation stone which originated from Malta. 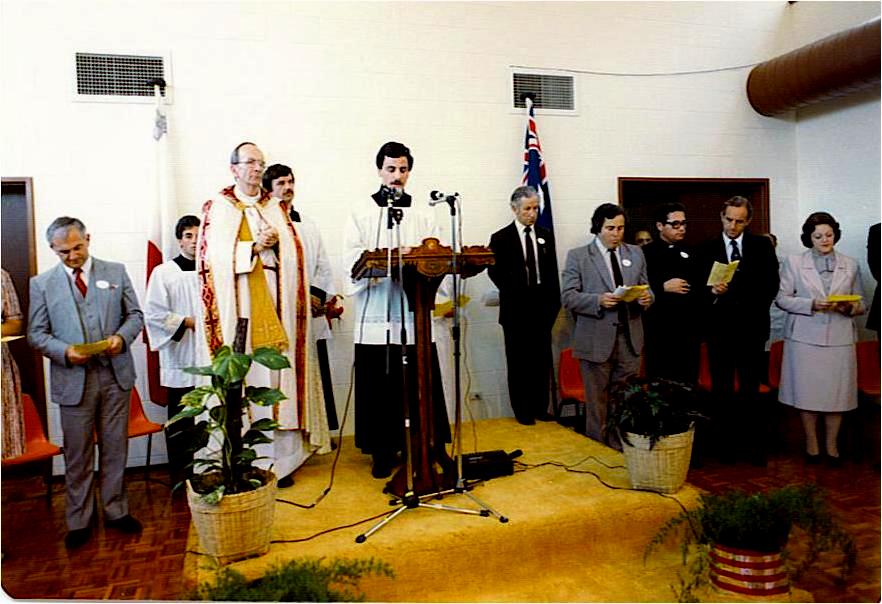 The official opening of the new Maltese Centre in November 1983.

The Centre houses a library, with about a thousand books, that became open to all in early 1985. Books and tapes can be borrowed except rare books and reference books. Dr. Maurice Cauchi looked after its establishment and Mr. Edwin Baldacchino helped with setting up the necessary facilities.

The MCCV became an incorporated association under the laws of the State of Victoria on 12 July 1984. As an effect of the incorporation, the premises at North Sunshine passed from the trustees’ hands and became registered in the Council’s name.
At the Annual General Meeting, held on 27 July 1986, after 10 years at the helm, Mr Victor Borg did not seek re-election to the Presidency and Dr Maurice Cauchi, a medical practitioner, succeeded him in that office.
The MCCV’s own monthly newspaper, Il-Maltija, was published under the editorship of Mr. Charles Camilleri in 1990.
After almost 6 years leading the MCCV, Dr. Cauchi stepped down after the meeting of 5th February 1992 as he was re-settling in Malta. Mr. Joseph Borg took over the presidency initially in an acting capacity and later he was formally elected President at the Annual General Meeting on 26 July 1992. Messrs. Victor Borg and George Saliba were elected Vice-Presidents; Ben Soler, Secretary; Ms. Vivienne Kost; Asst. Secretary; Paul Borg, Treasurer; Joe Montebello, PRO; Frank Calleja, Welfare Officer; Charles Portelli, Asst. Treasurer. 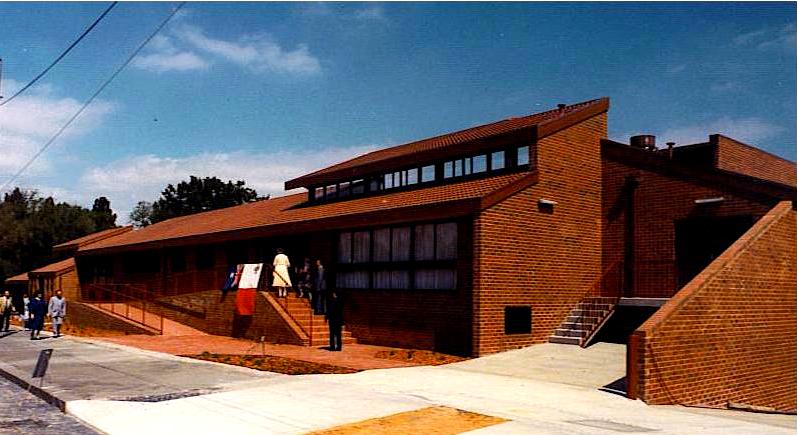 In 1992, the MCCV purchased a shop-front in Watt Street, Sunshine, jointly with the MSSP, after the demolition and sale of the building in Westmoreland Road, Sunshine.
Various activities are organised with the scope of promoting Maltese culture and encouraging local Maltese talent. The MCCV organises annually the Maltese Cultural Festival and most recently has signified its support of the Maltese Government’s Roots programme that encourages youngsters of Maltese origin to trace their Maltese heritage.
The MCCV also contributes to the unity of the Maltese community throughout Australia. On the 25th and 26th January 1986, the Council hosted the first national welfare seminar which was held at the Centru Malti in Parkville with representatives from all the major Australian States. The Maltese Federal Council of Australia was born during that Australia Day long week-end in 1986 in Melbourne. Unfortunately it never really took off as it was envisaged.

In October 1997, the MCCV started delivering Community Aged Care Packages (CACPs) to Maltese frail elderly who need planned and co-ordinate services because of their complex care needs. It enables them to live independently in their own homes or in the community and delays their need to enter an institutional environment. The Council owns and runs the only Maltese public library in Australia at the Centru Maltiin Parkville. In addition to books, audio and visual material is also available.
Having developed into an umbrella organisation for its affiliated members, the MCCV is recognised as the official and legitimate body representing the Maltese community of Victoria.
(The contribution of Mr Albert W Agius to this page is warmly acknowledged and appreciated.)