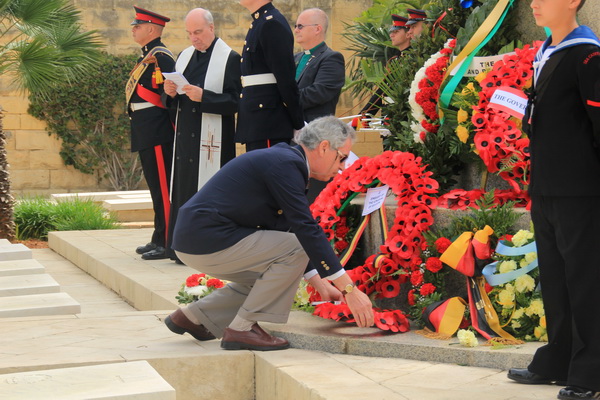 On Monday 25th April at 10.00 am the ANZAC Day Service of Remembrance and Wreath Laying Ceremony was held at Pieta’ Military Cemetery. The service was conducted by a number of chaplains and was followed by the laying of 35 wreaths by members of the diplomatic corps as well as associations representing the armed forces and various Maltese and Maltese Australian associations. Mr Lewis Zammit laid a wreath on behalf of the Maltese Historical Association (MHA) – Australia.

The invitation to participate at the ANZAC Day service was extended by the High Commissioner for Australia, Ms Anne Quinane, at the behest of the Maltese Australian Association.

The following information on the role of Malta in the Gallipoli and subsequent conflicts is taken from the ANZAC Day Official Program.

In the Gallipoli Campaign, Malta became known as “The Nurse of the Mediterranean” as numerous sick and wounded men were evacuated to the island for medical treatment. Despite the best efforts of medical staff, some casualties did not recover and were buried on the island. Among these are 202 members of the Australian Imperial Force and 72 members of the New Zealand Expeditionary Force. During the Second World War, pilots from Australia and New Zealand formed part of fighter defence and offensive operations. There are 24 members of the RAAF and 7 members of the RNZAF buried in Malta.

The last Australian service man buried in Malta died in a flying accident in 1954. He belonged to No. 78 Wing of the RAAF on tour of duty on the island.

After the service, a reception was held at Villa Risq, the home of the High Commissioner for Australia, attended by, amongst others, His Grace the Archbishop Pawlu Cremona, Prof Richard Divall, and Ms Angele Azzopardi, the former Maltese Consul in Melbourne.