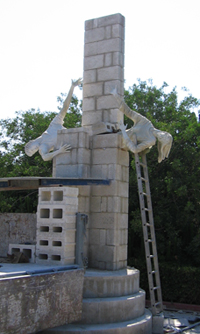 The first phase of the pedestal construction, that is the concrete core, of the ANZAC Memorial in Malta is now complete, according to Mr Nicholas Bonello, Chairman of the ANZAC memorial committee. “The plaster models of the figures were tried in place today, and one can have an idea of what the memorial will look like when the bronze figures are put in place. The preparations for the other phases, i.e. marble and bronze castings, can now be taken in hand,” said Mr Bonello

The ANZAC Memorial will be erected in Malta – the first ANZAC monument outside Australia and New Zealand, except for Gallipoli in Turkey. The aim of the Memorial is to commemorate and honour the many Australian and New Zealand troops who died in the prime of their lives at Gallipoli during World War I and in battles that took place in Europe, particularly France, during World War II, when Malta featured prominently. About 300 soldiers from Australia and New Zealand are buried in Malta.

Artist Ġanni Bonnici’s work was chosen from the five entries in the memorial design competition held in October 2005, and he was awarded Lm500 in prize money. According to Mr Bonnici, the two figures, which the memorial incorporates, would be life-size, or larger, and made of bronze, while the rest would be constructed from local materials. The idea behind his design was not to represent war and weapons, but rather the humanity that defended it and those who lost their lives fighting for their country. Not only soldiers perished but their families suffered, so Mr Bonnici chose to incorporate a man and a woman in the memorial. Keeping it simple, so that its interpretation would be open to the viewer’s imagination, the artist said he wanted to represent the negative and depressing aspect of war and not the victory element.

Donations for the ANZAC Memorial are welcome and should be posted to: