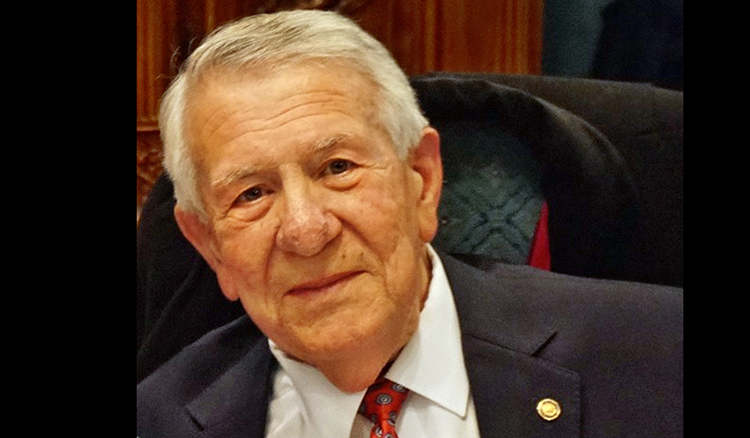 The Maltese community in Melbourne mourns the sad loss of Anthony Paul Zarb, affectionately known as Tony Zarb. He was a loving husband, loyal brother, dedicated father, proud grandfather and adoring great-grandfather and earned an enduring respect from friends and all who knew him.
Tony was a prominent member of the Maltese community in Melbourne. In 1998 Tony became the president of the Maltese Salesian Past Pupil Association and, for the next eight years, he steered the Association to support the missionary work of the Salesians. He won the respect of the Association members and Bishop of the Solomon Islands.
Born in Sliema, Malta on January 17, 1935 to Vincent and Connie Zarb, Tony was the eighth born child of ten. Only five of the children survived to adulthood. Like most children of his generation our father, Tony, spent his childhood years through WWII. During three years of on and off bombing he sheltered from German and Italian bombs. In 1942 Malta was considered ‘the most dangerous place on earth.’ As a child and adolescent Dad enjoyed sport (usually football – soccer), music, singing solo in the church choir, The Boys’ Brigade and his beloved Salesian Youth Club.
As awkward and shy 12-year-old he met the girl that would later become his wife of 60 years and one week. It was not until they were both 15 that he summoned the courage to ask her out. Thus begun a 67 year journey of love. After a seven-year courtship Tony married Tessie and they lived in Sliema with his mother-in-law. Within three years they had two sons, Avan and Alex.
In 1961 Tony and his wife agreed that they should move to Australia as he thought that this would provide his sons with the best opportunity in life. In March that year Tony and his family, his brother-in-law, Joe, and his mother-in-law, Stella, migrated to Australia with £25 in his pocket. In the same decade they had two other sons, Martin and Adam.
Tony was a hardworking man. He believed that his wife should stay at home to look after the young children and ensure they had a good education. His children and grandchildren have inherited his work ethic and commitment to family. The family drove to Adelaide, at times visiting two or three times in the one year for a flying weekend visit to spend a few days with Dad’s siblings and their families. Visiting Adelaide over Christmas was a special event. Tony was always there for his mother in law, Stella, and other members of Mum’s family.
As his boys were growing up Tony made every effort to be with his family, despite working two full time jobs. He would drive home every night, between jobs, to have dinner with the family. There wasn’t one jamboree, scout camp or school event that he would miss. He was both proud and protective of his family. When grandchildren and great grandchildren arrived, he travelled interstate and to New Zealand to capture their lifetime events.
Between 1961 and 1969 Tony and Tessie moved to three different houses. Tony worked as a factory worker, cleaner, doorman, kitchen hand whilst an animal technician at the University of Melbourne. Tony made friends with everyone from all walks of life and showed respect to all he met. It seemed that everyone at the University knew him. At his retirement function, there were representatives from nearly every part of the University, including the Vice-Chancellor, gardeners, department heads and colleagues. He was proud to receive the University Medal as a symbol of his long and faithful 36-year service to the University.
Tony had a great sense of humour and loved to play the odd practical joke. His work colleague and friend Stan bore the brunt of most of his practical jokes over the 30 years working together but other friends didn’t miss out. In 1977, the VFL grand final was between North Melbourne and Collingwood. Two families in our street had their front gardens decorated in corresponding team colours. Dad borrowed a small white coffin and painted black stripes on it. Fortunately, Collingwood lost and our long-time friends awoke with the coffin on their lawn. It remained there for over a week, but due to Dad’s charm, wit and charismatic nature, their friendship continued.
Tony also loved a party or celebration. The traditional lighting of the family home during Christmas was the envy of East Keilor and rivalled Ivanhoe. Most family milestones were celebrated with other family and friends. Tony organised the social events at work and was involved in all family activities.
A founding family of the parish of St Peter’s Keilor East, Tony and Tessie attended all the parish religious and social functions. Tony supported Tessie with the St. Peter’s Social Club for 31 years. Tony loved to sing whether at church, in the home and garden or at parties in front of others.
Tony passed away at the Royal Melbourne Hospital with his family present at his bedside on May 19, 2017 at the age of 82. He will be remembered as a hard working yet generous man who would do anything and everything for not just family and friends but also for those less fortunate in life. We will miss your laughter, wit and wisdom.
May he rest in peace.
This is an edited version of the eulogy written by Tony’s sons Avan, Alex, Martin & Adam Zarb.