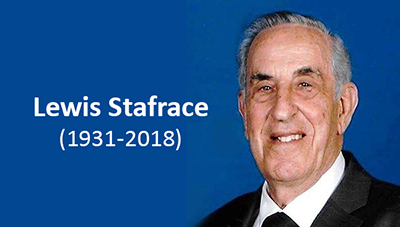 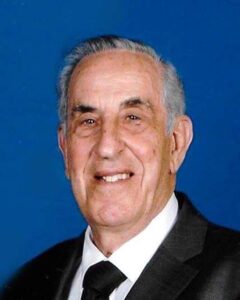 BLOG   By Paul Vella    On Tuesday 17 April 2018 a prominent member of the Maltese community in Victoria, Lewis Stafrace, passed away aged 86. Lewis was a broadcaster and Convenor of the Maltese language programmes on Melbourne community Radio 3ZZZ. He also held a number of important executive positions in various Maltese associations, typically in the role of president, and was much loved as a Maltese community leader.
Lewis Stafrace was born in Valletta, Malta, on 3 September 1931, the son of Vincent (ex-Royal Navy) and Carmen (née Micallef), He spent his early days as a student at the Baviera Primary School in Valletta and later at St Aloysius College in Birkirkara.
After leaving school, he worked in a lawyer’s office in Valletta and was later employed by an import/export company, LaRosa & Son in Ordinance Street Valletta. This company was good to Lewis but his desire to explore and wander started to come to the fore. Lewis was successful in obtaining funding from the Pappafy Fund out of hundreds of applicants, and his desire to migrate became a reality. Ten applicants were selected. Successful applicants had to meet various Government figures, including the then Prime Minister of Malta, the Hon Dr Paul Boffa, the Hon Dom Mintoff, Dr. Hyzler.
At age 18, on 17 November 1949 he emigrated to Australia and landed in Melbourne 2 December. In November 1954 he married Maria née Grima, on 6 November 1954 and they had three daughters: Christina, Annette, Louise. Lewis became an Australian citizen in 1969.
Lewis was heavily involved in the formation of the Maltese Western Suburbs Assoc (now closed). From his business address, Lewmar in St Albans, he supported all communities and gave service and advice to many Maltese migrants and assisted in finding accommodation and to many loaned funds in the early days.
Lewis was a former President of the Green Gully Cavaliers Soccer Club and a Life Member. Co-Ordinator. Secretary/Treasurer of Keilor Downs Community Centre for 21 years. He was a member of the Brimbank Festival  Advisory Committee.
Lewis was also planner, organizer, fundraiser and co-ordinator for 30 years of the Good Friday Easter Pageant and actually the Founder and President of St Albans Good Friday Association Inc.
He was President of Bacchus Marsh Good Friday Association and coordinated the move of the prestigious Good Friday Pageant to Our Lady ta’ Pinu Shrine in Bacchus Marsh.
He was also a Justice of the Peace, and being a musician, he was President of Community Bands. He was former president, founder and musician of St.Albans Melita Band Inc for 9 years, musician with St. Albans Melita Band for 9 years, musician with the Maltese Own Band for 10 years, founder and leader with the Maltese United Brass Band.
Lewis received many awards, including Victoria’s Award for Excellence in Multicultural Affairs, “Award for Meritorious Service to the Community”; Manoel De Vilhena Award for Contribution & Work to the Community (under the Patronage of the Prime Minister of Malta); 2001 Civic Awards, Maribyrnong City Council, and Brimbank City Council Resident of the Year 2007.
Lewis served as Executive Member of the Maltese Community Council of Victoria for two years. In 2014 he was awarded an MCCV Community Award for services to the Maltese community in the field of welfare services.
Lewis was also a keen sportsman and played soccer with George Cross Soccer Club and Coburg Soccer Club. He also acted as Team Manager of Green Gully Soccer Club 1971, when it won its first championship (the Division Two Metropolitan League). For seven years (1971-1978) he served as President of Green Gully Ajax Soccer Club. He was also responsible for the development of the Soccer Complex at Green Gully
Lewis spent 15 years as a referee in Melbourne. He became a qualified referee in 1954 and he was one of the first referees in Australia to receive the FIFA badge. For 15 years (1955-1970) he was a FIFA referee and an executive member of the Victorian Soccer Referees Association.
In 2015 he was elected as the new Convenor of the Maltese Programmes of Melbourne Community Radio 3ZZZ, a position he carried out in a fair and professional way. Mario Sammut, Paul Vella and Liz Phillips, the three broadcasters of the Maltese programs, as well as Salvina Vella, who helps on the phone on the requests programs, will feel his loss with great sadness.
As a radio broadcaster for 11 years, Lewis always produced programs to his great ability and listeners loved his programs. We used to admire his dedication in travelling a fair distance from home to broadcast his programs. He will be missed. He will be missed by his fellow broadcasters and listeners in general.
Lewis leaves to mourn him his wife Mara and three daughters, Christina, Annette and Louise. He was also a grandparent of six boys and one girl and a grandparent of four girls and a boy.
The people who attended his funeral and Mass presente cadevere on 23 April at the St Catherine of Siena Church in Caroline Springs, was proof of the high esteem people had for Lewis. A number of prominent people were also present to give their last respects.
May he rest in peace.