Bishop of Gozo greeted at the Maltese Centre in Melbourne 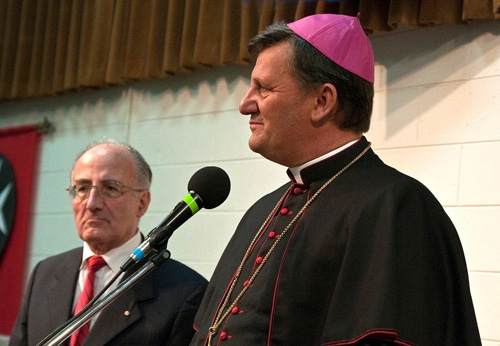 Last Thursday the Maltese Community Council of Victoria hosted a welcome reception in honour of the Bishop of Gozo, Mons. Mario Grech, at the Maltese Centre in Parkville, an inner suburb of Melbourne. Bishop Grech, who is on a month long pastoral visit to Australia, was greeted by members of the Melbourne Maltese community. Bishop Grech, who was previously the Parish Priest at Kercem, Gozo, was appointed Bishop of Gozo five years ago.

MCCV President Professor Maurice Cauchi warmly welcomed Bishop Grech to the Maltese Centre. Putting Bishop Grech’s visit into a historical perspective, Prof. Cauchi said that in the last 43 years there were five visits by Maltese Church leaders to Australia, an average of one visit every nine years. He said that hopefully we do not have to wait another nine years to welcome Mons. Grech back to Australia.

The first visit by a Maltese Church leader was in 1968 by Prof. Cauchi’s brother, Mons. Nikol Cauchi, Bishop of Gozo, followed in 1983 by Archbishop of Malta, Mons. Joseph Mercieca, and in 1995 again by Mons. Nikol Cauchi. In 2008 Archbishop of Malta, Mons. Paul Cremona, came to Australia on the occasion of World Youth Day, when Pope Benedict visited Australia to officiate. Prof. Cauchi said that on that occasion several youths from Malta also came to Australia for the event and they were generously hosted by Maltese families and religious congregations in Melbourne.

Prof. Cauchi then gave a brief history of the MCCV and the Maltese Centre. Established in 1958, the MCCV’s main objective was to assist migrants then arriving from Malta, not knowing anyone here, meet them at the ports as they arrived by ship, help them find employment and settle in their new environment. The MCCV is an umbrella organisation of about 40 affiliated Maltese associations representing the Maltese community in Victoria. The MCCV represents the interests of the local Maltese community in dealings with the Australian federal and Victorian state authorities as well as the Maltese Government. The MCCV receives grants from the Australian federal and Victorian governments to be able to provide important welfare services to the Maltese Community.

Prof. Cauchi said that the needs of the Maltese community are changing with the ageing of most of those who migrated to Australia in the 1950s and 1960s and the numbers are declining. According to the Australian Census held in 2006 there were about 22,000 people born in Malta living in Victoria, making Melbourne the Maltese capital city of Australia. Prof. Cauchi said that in this year’s Census he expects that number to drop by about 10 percent. The number of second and third generation Maltese keeps growing but no-one really knows their real number as it depends on whether these people register their Maltese ancestry in their Census response. He said that the total number of people of Maltese descent in Australia is estimated at around 200,000.

Prof. Cauchi spoke about the important work of two of the MCCV affiliated associations, namely, the Maltese Literature Group and the Maltese Historical Associations, which for the past 30 years and 24 years respectively, have promoted the Maltese language, history and culture in Melbourne.

Prof. Cauchi also referred to the establishment of the Bishop Joseph Grech Memorial Fund in memory of the late Maltese Bishop that the MCCV established earlier this year aimed at encouraging the younger generations of Maltese in Victoria to take a greater interest in Maltese history and culture. From June 2012 the Fund will be awarding annual scholarships to youths of Maltese descent to travel to Malta in order to experience first-hand Maltese language, history and culture.

In his address Bishop Grech thanked Prof Cauchi and the MCCV for giving him the opportunity to meet with the Maltese community in Melbourne. He said that he was delighted to experience this visit both as a Maltese citizen, who feels close to Maltese migrants, as well as a Christian, being a priest and a bishop.

Bishop Grech said that he needs to stop and reflect on his visit to Australia as he has been attending many events with the Maltese communities in Australia without having the time to “taste and chew” the experiences. He said he hoped to do so, if not during his stay in Australia, after his return to his home country.

Bishop Grech praised the work of the MCCV in providing the local Maltese community with critical welfare services, particularly to the ageing members who find themselves in situations needing assistance. He said that in a world that is more interested in production and has been taken over by technology, we seem to be experiencing cultural poverty. It is important that we ensure that the Maltese culture is maintained and woven into the new world reality. He said that Maltese culture is our history and provides the platform for our future. He said that culture can make us richer as persons, such as, by taking a greater interest in art, literature and history, that reflects the fabric of human life.

Bishop Grech said that migrants from Malta and Gozo brought a store of the complete Maltese culture with them to Australia. They have an obligation towards the younger generation to open a window into Maltese culture for them to experience. He said that, since Maltese culture is what makes us Maltese, if we lose our culture we also lose our Maltese identity.

Bishop Grech said that he was pleased to meet students who were taking classes in the Maltese language at the Maltese Centre before the reception. He said that, when he asked some of them why they were studying the language, he was hoping to be told that the reason is to learn how to use a tool that would enable them to open a window into Maltese culture. Bishop Grech asked who will generate the pleasure, the thirst and the desire for this national patrimony in the younger generation.

Bishop Grech wished the MCCV well in continuing its valuable work in the Maltese community so that we enrich ourselves not just in a financial sense, as that by itself we leave us the poorer, but also in a cultural sense. He said that Maltese culture is also developing in the Australian context and it is important that there is also enthusiasm and interest in the culture of the Australian nation. Without this interest in Australian history and culture, there is a risk that one ends up being neither Maltese nor Australian, which would be the worst possible outcome that we could pass on to our future generations.

Bishop Grech said that he is very comfortable having the Christian culture and the Maltese culture with which to be in dialogue with the world around us, even though unfortunately there may be certain currents in some cultures of our times that may leave one short of satisfaction. He said that he does not understand and, in fact, he fears a culture that, in order to be seen as contemporary, must exclude God because, if it goes as far as to exclude God, it is likely that it will also eventually go as far as to exclude man.

Bishop Grech said that, by contrast, a culture that has this sense of belief in God, even if not Christian, helps to contribute to the development of the cultures of our times, particularly, in the relationship between thought or philosophy, which are supposed to be a fundamental element of any culture, on the one hand, and belief in God or theology on the other. Reason, which is a gift and capability of man, and belief complement each other considerably and contribute to the complete progress of man and to the development of culture. “Re
ason and belief are the two wings that the bird needs to be able to fly,” he said.

Fr Mario Zammit, MSSP Regional Provincial in Australia, said that the MSSP has a higher profile in Melbourne, having been present here since 1948 working in partnership with the MCCV to serve the Maltese community. He said that he wanted to thank the Maltese community in Bishop Grech’s presence for accepting and following the spiritual guidance of the MSSP priests as their shepherds. Prof Cauchi acknowledged the significant contribution of the MSSP and said that, had it not been for the MSSP who made their land in Parkville available, the building of the Maltese Centre in Parkville would not have been possible.

At the end of the formalities, Prof. Cauchi presented Bishop Grech with a memento for the occasion and a copy of his book Under One Umbrella: A History of the Maltese Community Council of Victoria 1958-2008 on behalf of the MCCV and the Maltese community. MCCV Secretary, Mrs Edwina Mallia, also presented a small birthday gift to Mrs Stella Grech.

Among those present at the reception were the Consul General for Malta in Victoria, Mr Charles Mifsud, and his wife, Mrs Anna Maria Mifsud, as well as Bishop Grech’s parents, Mr George Grech and Mrs Stella Grech, and his brother, Mro. Carmel Grech.

Also present were four media representatives from Malta, who happened to be on a visit to Melbourne not connected with the Bishop’s visit: Mr Victor Aquilina (The Sunday Times), Ms Annaliza Borg (The Malta Independent on Sunday), Mr Raymond Sammut (It-Torca), Mr John Zammit (Il-Mument), as well as their group leader, Ms Anna Maria Zrinzo (BPC International Ltd). Prof. Cauchi presented them with a copy of the book on the MCCV History.