Celebration of the Feast of Maria Bambina in Melbourne 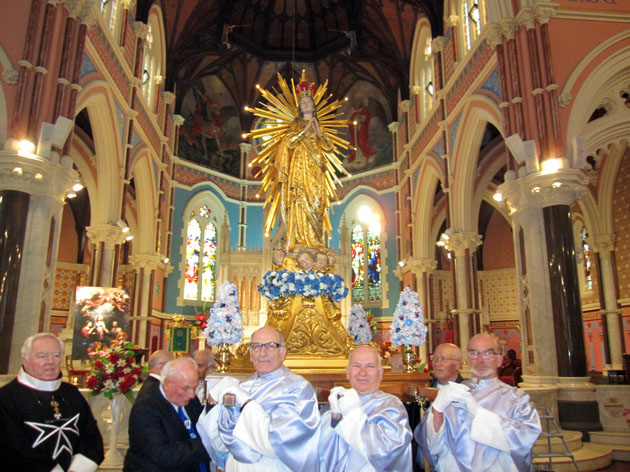 ‘Il-Vitorja’ or Victory Day on 8th September is one of Malta’s most important days in its history, coinciding with the feast of the birth of Our Lady, or Maria Bambina. A National Day in Malta, on that day the Maltese commemorate the end of the Great Siege in 1565 with victory over the Ottoman Empire, the end of the French occupation of Malta in 1800 and the fall of the Fascist regime in Italy in 1943.

The 8th of September also has a religious significance since it is connected to the nativity of Mary and celebrated universally by the Catholic Church. Just as religious feasts are held in three parishes in Malta and one in Gozo, the feast of Maria Bambina is also celebrated by the Maltese community in Melbourne every year. This year it was once again organised by Reskeon Maltese Association on behalf of the Missionary Society of St. Paul.

Mass at the Maltese Centre

On Thursday, 6th September, a Mass was celebrated in the main hall of the Maltese Centre, Parkville, by Father Edwin Agius, mssp, Rector at Parkville, attended by around 120 members of the Maltese Community. Concelebrant was Fr Mark Demanuele, mssp, who was on a visit to Melbourne from Gozo.

The Homily was delivered by Fr Agius. Singing during Mass was led by Emmanuel Farrugia, accompanied on the organ by his wife, Margaret. Readers were Phyllis Vella and Mr Charles Mifsud, while Mr Guy Deguara read the Prayers of the Faithful.

After Mass the St. Albans Melita Band presented a concert in the hall, which was decorated for the occasion by Alfred Asciak.

Later in the night the Malta Gozo City of Brimbank Concert Band played marches for the occasion which created the merriment for the night, similar to that of the Maltese Festas.

On Sunday, 9th September Reskeon organised the Feast of Maria Bambina on behalf of the Missionary Society of St Paul, at St Mary Star of the Sea Church, West Melbourne.

A large number of Maltese Associations attended as well along with their banners, as well as the banners from the four villages and towns where the Bambina is celebrated in Malta and Gozo: Senglea, Mellieħa, Naxxar and Xagħra, Gozo. Also present were Sisters from Religious Orders, members of the Society of Christian Doctrine and the Chief Representative in Australia of the Bank of Valletta plc, Mr George Portelli and Mrs Portelli.

Rosary was recited at 2.30 pm by Mr Emmanuel Farrugia, which was followed by a Concelebrated Mass. Prime Celebrant was Fr Mark Demanuele, mssp, and concelebrants were Fr Edwin Agius, mssp; Fr Dr Victor Shields, mssp; Fr Karm Borg and Fr Dom Degiorgio. Master of ceremonies was Emmanuel Farrugia. The music and singing was provided by the Maltese Choir of Victoria under the direction of Mr Charles Schembri and Ms Lydia Gusman.

First Reader was Mr Charles Mifsud while Dr Edwin Borg-Manché did the second Reading. Fr Edwin Agius read the Gospel. The Homily was delivered by Fr Mark Demanuele. Prayers of the Faithful were read by Ms Anoinette Bajada.

The Sacrificial Offerings were brought to the Altar by Charles and Vivian Tabone and Victor and Doris Vella.

After Mass, Fr Edwin Agius thanked all those present and the Reskeon Maltese Association for organising the Feast on their behalf. Special thanks went to Fr Max Pollak, Parish Priest of St. Mary Star of the Sea.

This was followed by a procession with the beautiful Statue of Maria Bambina in the streets around the church accompanied by the Maltese Own Band Philharmonic Society under the direction of Mro. George Aquilina, members of a large number of Maltese associations carrying their respective banners and followed by a large crowd from those attending the Church service.

The Procession was followed by the Benediction of the Blessed Sacrament.

This year we were celebrating the 35th Anniversary of the arrival of the Statue of Maria Bambina in Melbourne and the foundation of the Maltese Own Band to participate in the same Feast.

Thanks to all those Reskeon members who on Thursday, Friday and Saturday helped with the preparation for the Feast and then on Monday for putting everything back in its place.