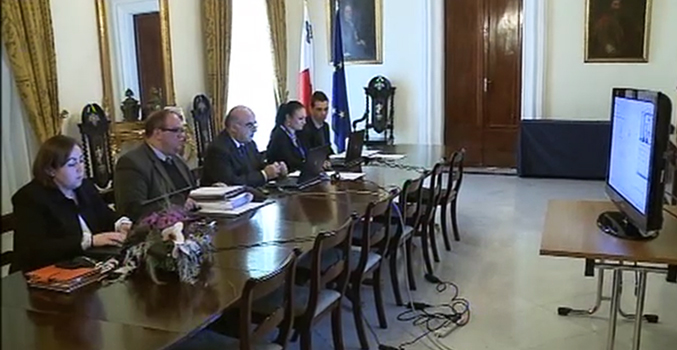 NEWS   On Monday 24 March 2014 the Council for Maltese Living Abroad (CMLA) held its fourth meeting by means of a video conference organised by the Ministry. The Ministry of Foreign Affairs keeps contact with representatives of Maltese communities abroad through the Council which was established by Act of Parliament passed unanimously in late 2011. Its inaugural meeting was held in Malta in September 2012.
Interviewed by TVM for a news report broadcast on SBS last week, Minister for Foreign Affairs and ex officio CMLA Chairman Dr George Vella said that on the CMLA agenda are issues on which during the year members of the Council communicate electronically among themselves and with the CMLA Secretary and Directorate within the Ministry.
Dr Vella said that CMLA members discuss the various issues affecting Maltese living overseas and generate ideas and opinions on those issues and these are conveyed to the Ministry.

Also interviewed by TVM, CMLA Secretary Ms Maria Calleja said that there were a number of issues raised and discussed at the meeting held in Malta last October. These issues included the biometric passports process and how this could be made easier for Maltese living abroad, particularly those who do not live in close proximity to the capital cities of the country where they reside and where the Maltese embassies and consulates are usually located.  Another issue mentioned by Ms Calleja was that of applications for Maltese citizenship.

Monitor showing some of the participating CMLA members from overseas. [photo: TVM]

Dr Vella said that his Ministry is working on the next Convention of Maltese Living Abroad which usually takes place every ten years and in which Maltese from around the world are invited to participate. A decision has been made to have it held every five years, the next one being held next year.
Maltese living abroad estimated at 900,000
In its news bulletin broadcast last week, TVM reported on the estimated number of Maltese living overseas. According to statistics held by TVM the number of Maltese up to the fifth generation residing abroad around the world is estimated at about 900,000, which more than double the population living in Malta.
By far the largest number of Maltese descendants up to the fifth generation lives in Australia where, according to the news report, from the census they are estimated at 447,000.
The second largest group of Maltese overseas lives in the United States numbering 220,000 and England with 91,000 is the third largest.
The surprising news was that there are Maltese who reside in places that one does not expect to find them, such as, Macao, Marshall Islands, Solomon Islands, Samoa, Christmas Island, Vanuatu as well as Trinidad and Tobago. There are some, if only a few individuals, living in countries such as Iran, Iraq, Botswana and Congo.
Malta’s membership of the European Union appears to have led to a substantial increase in the number of Maltese living in Belgium now numbering about 668. In continental Europe the Maltese presence includes 900 in Italy, 23 in the Vatican, 600 in France and 276 in the Netherlands.
There is also a large longstanding Maltese community on the Mediterranean island of Corfu numbering 7,000.
Malta’s commercial ties with the Middle East have led to an increase of Maltese presence in those countries including 733 in the United Arab Emirates and 36 in Qatar among others.
[Source: www.tvm.com.mt]
Previous
Major cabinet reshuffle in Malta after one year in government
Next
23,000 foreign nationals from 151 countries living in Malta