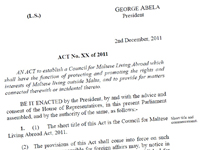 On Tuesday 22 November Malta’s Parliament approved by unanimous vote an Act that establishes the Council for Maltese Living Abroad. The passing of the Act marks a historic milestone, and ushers in a new and exciting era, in the relations between the Government of Malta and the Maltese diaspora around the world and the further strengthening of the concept of ‘Greater Malta’.

The Act establishes for the first time the legal instrument that gives an effective voice to Maltese living abroad, a promise made by Prime Minister Dr Lawrence Gonzi and the Deputy Prime Minister and Minister of Foreign Affairs, Dr Tonio Borg, to the Maltese communities’ representatives who attended the Convention of Maltese Living Abroad held in Malta in March 2010. The Act is the result of a broad consultation process that included the Opposition as well as the Maltese communities overseas. The strong support for the Bill by the Opposition in Parliament was led by Dr George Vella, Opposition spokesperson on foreign affairs.

The publication of the Bill was announced in Australia during a visit last month by Malta’s Deputy Prime Minister and Minister of Foreign Affairs, Dr Tonio Borg. During separate meetings with the leaders of the Maltese community in Sydney, Mebourne and Perth, the Deputy Prime Minister explained the principal details of the Act.

Following some minor amendments agreed at Committee Stage, the Council will be composed of fifteen members. Ten members will be resident abroad and appointed to represent the Maltese communities abroad, consisting of five from Australia (two from NSW, two from Victoria and one from any State other than NSW or Victoria), two from the USA, and one each from Canada, the UK and a member state of the European Union other than Malta and the UK . The Council will include five other persons, to be nominated by the Prime Minister, after consulting the Leader of the Opposition, from Maltese nationals who have special knowledge and experience of the needs and interests of Maltese living abroad. These five members would not be necessarily resident in Malta.

The Council will have the function to advise and be consulted on any matter or measure that impacts Maltese Living Abroad. It will be chaired by the Minister of Foreign Affairs, who will not have a vote in the Council. The Government will nominate members on the Council after due consideration is given to the advice and recommendations of the Maltese community councils.

The Council is obliged to submit an annual report that has to be discussed by the Permanent Committee of European and Foreign Affairs and that of Social Affairs.

The Act also empowers the Minister of Foreign Affairs with the concurrence of the Minister responsible for Culture to table in Parliament for approval regulations to establish the Maltese Cultural Institute as a separate entity and structure from the Council.

The Second Reading of the Bill to establish a Council for Maltese Living Abroad was passed by unanimous vote at last Monday’s sitting of Parliament.

Introducing the Bill, Deputy Prime Minister and Minister of Foreign Affairs, Dr Tonio Borg, said that the powers of the Council will be purely advisory and it will provide advice to the minister on any Bill that affected the rights, entitlements or interests of Maltese living abroad, any administrative measures affecting Maltese communities abroad and on public broadcasting services relating to programs for Maltese living abroad.

The Bill also includes an amendment to the Constitution requiring the State to “facilitate the participation of Maltese citizens who live abroad in the political, social, economic and cultural life of Malta.”

The Council will consist of 17 members – 12 of whom to be appointed from representatives of Maltese communities: two each from the states of Victoria and New South Wales in Australia, from the US, Canada, and EU countries (other than the UK and Malta) and one member each from among Maltese living in the UK and in any other state in Australia. The other five members of the Council, who had to have specialised knowledge on emigration and related affairs, will be appointed by the Prime Minister in consultation with the Leader of the Opposition.

The functions of the council will include monitoring the quality of life of Maltese living abroad; strengthening and cultivating ties between these communities and Malta’s political, cultural, economic and social life; ensuring effective protection of the rights of their rights and facilitating the maintenance of the cultural and linguistic identity of these communities.

Dr Borg said that to give the Council more importance, the Minister of Foreign Affairs will chair the council but would have no right to vote, not even to a casting vote. The Council is required to meet annually in Malta. A Directoratewith responsibility for Maltese communities abroad will be established in the Ministry of Foreign Affairs.

The government accepted the opposition’s suggestion to set up two registers – one for NGOs established outside Malta involved in the promotion and protection of the interests of Maltese living abroad, and another for prominent Maltese nationals living abroad who had distinguished themselves.

The Bill established also contains a provision that enables the Minister of Foreign Affairs in conjunction with the Minister of Culture to set up by regulation a Malta Cultural Institute to promote Maltese culture abroad.

Dr Borg said the success and effectiveness of the Council would depend on whether it enjoyed the support of the Maltese communities abroad and whether government department, agencies and Parliament recognised that it had certain rights.

The opposition’s main spokesman on foreign affairs, Dr George Vella, said there was a need to let the Maltese living abroad feel as much Maltese as those who lived here.

Dr Vella said the concept of Maltese Cultural Institute should be studied and discussed in more detail to ensure that it encompasses more than just serving to hold exhibitions or deliver lectures on Maltese cultural topics. The late Mr Frans Sammut had already been working on this idea in 1996 under the Labour government.

Dr Vella stressed that it was important that one should promote the idea of ‘greater Malta’ as such a comcept would also be beneficial to tourism. The Council should have an organised committee to ensure continuity in day-to-day contact with Maltese communities abroad.

Refering to the importance of recording and teaching the history of migration as part of the school curriculum, Dr Vella said that this would also help Maltese children to understand the circumstances that led Maltese to emigrate particularly in the 1950s and 1960s.

Dr Vella said this Council would make the Maltese living abroad feel more a part of Malta even though the Maltese never rejected them.

Labour MP Dr Owen Bonnici said Malta should make use of Maltese descendants’ knowledge to export Maltese culture. Recently one could see the concept of a greater Malta at play when the national rugby team, made up mostly of Australians of Maltese descent, succeeded in winning a game against Latvia. It was wrong to think that sport was not a proper medium for culture.

Dr Bonnici said that even in t
he case of Sharon Spiteri, Malta should make use of her talent because she could also contribute greatly to Malta’s musical sphere. The Maltese Cultural Institute should not be limited to the traditional arts and folklore but should also work on sport and pop culture. The biggest challenge would be to spread Maltese culture with people who were not of Maltese descent.

Dr Bonnici said that the Maltese Cultural Institute should also strive to strike deals with foreign universities which would help in bringing foreigners to study Maltese studies. Moreover, there should be no duplication of roles once other organisations established in Malta worked to spread the Maltese culture. Resources should be allocated wisely, he said.

Dr Bonnici said that one should not limit oneself by focusing on Maltese who had emigrated abroad 60 years ago, but reference to Maltese who were going abroad to work should also be made. A different perspective should be adopted with regard to the latter, he said.

Labour MP Noel Farrugia said that there were some 370,000 Maltese persons currently living abroad. However, the younger generation was again unhappy with the employment situation in Malta. Salaries did not match those of other EU countries and the cost of living was high. Many sought better opportunities in foreign countries. It was the economic situation that had prompted them to leave the country and that it was thus very important to ensure that the highest welfare state be present in Malta.

Winding up the debate, Minister Borg said that the opposition would be consulted when it came to appointing the 12 representatives of the Maltese communities abroad.

Audio Recording of Debate in Maltese

Listen to the audio of Parliamentary Sitting No. 404 in Maltese – Second Reading debate on Council of Maltese Living Abroad Bill.

Note: The first 5 minutes are blank and the debate on the Bill itself starts about 35 minutes into the recording.

The Maltese Parliament will start debating the Second Reading of Bill No. 89 to establish a Council for Maltese Living Abroad later today. The parliamentary sitting commences at 6.00 pm Malta time. The Bill is listed as the first item on the Orders of the Day.

The Bill was published less than two weeks ago during a visit to Melbourne by the Deputy Prime Minister and Minister of Foreign Affairs, Dr Tonio Borg. The function of the Council will be to protect and promote the rights and interests of Maltese living outside Malta.

Previous
ECCV: VCAL funding cuts to hit migrant students
Next
Saintly Bishop returns to the House of the Lord