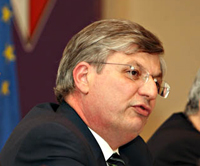 Deputy Prime Minister and Minister of Foreign Affairs, Dr Tonio Borg, this morning delivered the opening address at the Consuls Meeting taking place in St. Julians, Malta. More than one hundred consuls representing Malta across all continents convened for a three-day meeting that started yesterday, organised by the Ministry of Foreign Affairs. The agenda includes issues such as investment promotion, trade, Eco-Gozo, sport, tourism, shipping and aircraft registration and visa matters.

In his opening address, the Deputy Prime Minister welcomed the consuls and encouraged them to “come up with ideas and suggestions on how Malta can continue to register progress in various fields.” Dr Borg said that the Government is committed to listen to their advice and act accordingly. During the past two years, since the last Consuls Meeting, the Government appointed several new Consuls. “This is indeed encouraging for all of us. It is a sign that the Ministry is ready to face new challenges and embark on new ventures with various countries and regions,” said Dr Borg. In his address, the Deputy Prime Minister outlined the positive impact of Malta’s accession to the European Union on various aspects of the Maltese economy. In his view, joining the EU had changed the way Maltese industrialists think and operate, moving away from a labour intensive manufacturing base to high value added sectors that tap into the best of Malta’s dynamic and flexible workforce.

According to Dr Borg, “Malta considers its human resources to be one of its major strengths and has placed education, training and employment high on its reform agenda. It is with these challenges in mind that in recent years, the Government of Malta has embarked on several intensive structural reforms to project itself as a regional centre of excellence in Financial Services, Information and Communication technology (ICT), Tourism, High value-added Manufacturing, Health, Education and the development of our sister island Gozo into an Ecological Island.”

Dr Borg said that, through European Union membership and the adoption of the euro, the healthy economic fundamentals were strengthened. Moreover, by means of attractive investment support packages the government managed to successfully diversify the economic base by bringing to Malta new investments as well as expansions in highvalue added activities.

Government commitment to investment in education and training

Dr Borg referred to the Government’s commitment to continue investing in education and training as Malta’s ability to attract high value-added investment depends on our capacity to provide the human resources required. “Our higher educational institutions, particularly our vocational college, will continue to provide thesupply of highly skilled and qualified labour to meet the increasing demand of industry. We now have to focus on our ability to continue providing the human resources necessary for the sector to grow,” he said. Minister Borg explained how the Government is addressing this issue by encouraging more students to go into finance. “Currently, there are close to 3,000 students in our tertiary education institutions following finance related subjects. In addition, we are offering scholarships to help our students further their studies and achieve the excellence Maltese professional service providers are renowned for. Government is also offering tax credits for those students specialising in finance through the Get Qualified scheme,” he said.

Turning to topic of Foreign Direct Investment flows in Malta, Dr Borg said that “during the first half of 2010 amounted to over €550 million in a number of sectors including manufacturing, financial services and other economic activities. With close to €12 billion in foreign direct investment, Malta has now established a strong diversified economy.”

Dr Borg then spoke of the Government’s strategy over the past years, intensifying its efforts to bring “new high-value added activities to Malta in those niche sectors which we believe our economy can sustain in the long term.” By way of examples, he referred to the aircraft maintenance industry which now employs more than 1,000 employees and the pharmaceutical industry 1,400 people, while the financial services industry continues to grow at a rapid pace with 9,600 employees within the sector. Minister Borg said that Malta’s “strong regulatory regime and pro-active regulator is supported by one of the most competitive packages in the world. In addition to robust legislation, Malta offers modern infrastructure, an advantageous fiscal regime and a cost-effective base from which to carry out international business. Complementing this we have our biggest asset – a wealth of highly skilled professionals, whose commitment, expertise and ambition have given Malta its most powerful selling point.” According to Dr Borg, Malta has managed to “build a reputation for excellence that is being spread across the world and that is bringing us ever more business. The challenge is now to remain at the forefront of this sector.”

Minister Borg then referred to the Government’s internationalisation strategy as including the enhancement of Malta’s international credentials. “Apart from exploiting further the European single market, Government is actively enhancing the vast network of Double Taxation Agreements. Apart from upgrading the existing 50 Agreements, Government is constantly exploring the possibility of setting up new Agreements with new countries. During the past 3 years, my Ministry signed more than 100 bilateral agreements with various countries, a third of these being Double Taxation Agreements, said Dr Borg.

Minister Borg highlighted the critical importance of diversification for Malta whose small open economy is vulnerable to external shocks. Through its national vision, Vision 2015, the Government is “widening Malta’s economic pillars to reduce dependency on one particular economic sector,” he said. “Tourism remains a natural vocation for the Maltese islands. In 2010 we registered a record year in tourism and initial results for 2011 are encouraging. Government is investing heavily in our product and service offering, with a number of capital projects aimed at enhancing Malta’s image and product”, said Dr Borg.

According to the Minister, “it is the combination of these responsible decisions over the years that has helped Malta to not only weather the economic turbulence but to emerge stronger than other developed economies. With faster growth rates than the European and euro zone averages throughout 2010 and an improving labour market, Malta’s economic progress is being confirmed. Malta in fact registered the fifth lowest unemployment rate at 6.3% as well as the fastest increase in employment growth.”

In conclusion, Minister Borg said that Malta’s “high standards in regulation, legislation, human resources and other supporting areas have not only been the cornerstone of our success but, more importantly, they represent what will ensure Malta to fulfill its potential as a global financial services centre. Ours is a long-term and consistent strategy which aims to be a success story for everyone – the practitioners, the investors and the country.”

The agenda for the second day will include:

The agenda for the final day of the meeting will include:

The meeting will close with a discussion about sport tourism with Parliamentary Secretary for Youth and Sport Clyde Puli.