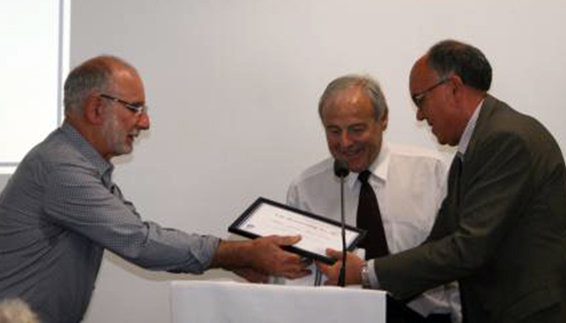 At the ECCV’s 2013 Annual General Meeting held Tuesday the 26th of November Prominent Maltese community member and Vice President of the MCCV, Mr Victor Borg, was one of two persons conferred a Life Member Award by the Ethnic Communities Council of Victoria in recognition of their services to the ethnic communities in Victoria. The other person was Mr Giovanni Sgro, a former member of the Victorian Parliament.

As an organisation with over 200 members, some of them life members, the ECCV recognised their input to the organization by attributing two Life Member Awards to Mr Borg and Mr Sgro. Both were presented with a certificate and a gift by Mr Caputo and Deputy Chair Eddie Micallef.

Mr Borg has been with ECCV since foundation in 1974 and served as its Chairperson between 1991 and 1997. In his speech accepting the award, he took those present back to those early days when the ECCV was just starting out and said that it is now as it was then “vital that we be bound together by our shared struggle for better recognition and equity”.

Mr Caputo then introduced the second awardee Mr Sgro as a long-time friend and mentor who was once refused citizenship due to his political work. Despite this, Giovanni became the first Italian-born member of the Legislative Council, where he made his maiden speech in Italian.