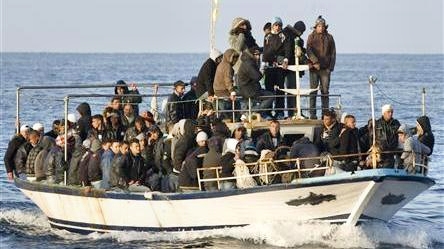 The European Court of Human Rights (ECHR) in Strasbourg has blocked Malta from a “push-back” of Somalian asylum seekers. It issued the injunction on Tuesday (9 July) amid advanced plans by Maltese authorities to put 45 of the would-be refugees under police guard on flights to Mitiga in Libya. They were part of a group of 102 men, women and infants picked up by the Maltese coastguard earlier the same day after crossing the Mediterranean Sea.
The Maltese coastguard last week rescued 291 people in similar circumstances. It said on Tuesday that two more boat-fulls of people are on their way, one of them carrying 68 people, including a woman who gave birth on board and needs medical attention.

The ECHR took the step after Maltese NGOs filed a complaint, after a strong statement was issued by the European Commission earlier the same day failed to make an impact.
EU Commissioner for Home Affairs, Cecilia Malmström, had told Malta it risks violating both EU and international law on “non-refoulement” if it did not give people the chance to file asylum requests and did not give their applications due consideration.
“The European Commission will use all the tools at its disposal to make sure member states fully respect their obligations in this regard. We also stand ready to increase our support to Malta if it should face growing migratory pressure,” she said.
“Should Maltese authorities ask for it, we are ready to engage in discussions on further measures, be it financial support or assistance through the European Asylum Support Office (EASO) and Frontex,” concluded her statement.

In the national interest

For his part, Malta’s Prime Minister, Dr Joseph Muscat, defended his actions in parliament, saying that he was acting in the national interest and that EU institutions had ignored his previous appeals for help.
“The [EU] commission … said it was ready to discuss offering Malta more assistance as news came in that we were considering all options. I’d say that this was a concrete example that our position has reaped the necessary results,” he said, according to the Maltatoday news agency.
Opposition leader Dr Simon Busuttil said Dr Muscat’s actions were “objectionable morally, legally and politically” and accused him of “tarnishing our reputation in Europe.”
According to the US-based NGO Human Rights Watch, migrants in Libya risk forced labour and police brutality. Somalian nationals are also entitled to protection because their country is in a state of civil war.

A group of 69 lawyers in Malta filed a judicial protest in the Civil Court against the Prime Minister, the Minister for Internal Affairs and National Security, the Head of the Armed Forces, the Commissioner of Police  and the Attorney General after the government announced that it was planning to repatriate migrants who arrived in Malta early yesterday morning.
The lawyers stated that, through the use of push backs, migrants would be denied the right to apply for asylum or protection. They also said that police denied NGOs access to speak to the migrants or offer them assistance. They claimed that such actions constitute illegal acts. The United Nations High Commissioner for Refugees (UNHCR) said in a statement that it visited part of the group of migrants that arrived in Malta yesterday morning, all Somali nationals, at the Lyster Detention Centre where “several individuals confirmed to UNHCR their wish and intention to apply for asylum”.
That afternoon, UNHCR Malta requested access to the rest of the group, currently held at the Police Headquarters in Floriana. The UNHCR Representative approached the Police Headquarters this afternoon, but so far access was not granted.
UNHCR had expected such access in view of the formal agreement with the Government of Malta which has undertaken “to grant UNHCR personnel an unimpeded access to refugees and other persons of concern to UNHCR”. UNHCR’s access to asylum seekers is also prescribed in terms of Maltese refugee and immigration legislation.
“We note that the European Court of Human Rights has this afternoon granted an interim measure under Rule 39, effectively preventing the deportation of the people who arrived on the boat in Malta this morning.
“The purpose of Rule 39 measures is to allow time for further assessment in cases where people facing deportation may be facing serious and irreversible harm.”
UNHCR Malta reiterates that given the current situation in Libya, forced return or push-back of asylum seekers is not an option, as this would constitute a breach of international law.
“The asylum issue is not one that can be solved in one action, no matter how determined.
“And it is also not a question of either-or approaches. Rather it is about building on what has already been achieved, working in multiple directions towards long term solutions both in Malta and in other countries,” Jon Hoisaeter, UNHCR Representative to Malta, said.

Speaking in Parliament yesterday evening, Home Affairs Minister Dr Manuel Mallia along with the Prime Minister confirmed that this decision of the European Court of Human Rights will be respected.
In an apparent case of brinksmanship, the Prime Minister explained that the migrants had been separated, with the healthy male members of the group being considered for the push-back.
Earlier on in the same Parliamentary sitting, Prime Minister Joseph Muscat had refused to rule out sending migrants back to Libya that night. Dr Muscat said that until official word is forthcoming from the European Court of Human Rights (ECHR), the government would continue to consider all its options.
“We stood up to be counted. The situation is no longer tolerable for our country. There is a political cost, and I am ready to bear it all on my shoulders. We believe that until now, we have put the issue on the agenda,” Dr Muscat said.
Referring to the NGOs who filed the injunction with the ECHR, Dr Muscat said that anyone trying to stop the government’s position will also have to bear the cost. The Prime Minister confirmed that he was in continual contact with the Libyan government over the issue.

Opposition leader Dr Simon Busuttil slammed the Prime Minister’s handling of the push-backs matter, declaring that “you are not doing this in our name, you can be responsible for it.”
Dr Busuttil accused the PM of “destroying” Malta’s reputation on the international stage, saying that Dr Muscat is actually working against the national interest, and not for it.
He questioned how people can trust the government to protect their interests, when they weren’t even ready to respects peoples’ lives.

The Prime Minister reminded the Opposition that the only time that a Maltese government has actually gone through with a push-back was in 2002 under a Nationalist administration, where 220 migrants were sent back to Eriteria.
“I was asked how I sleep at night. I do so because I am consistent. I said all this before the election. It is a clear indication that I put the national interest above all else,” Dr Muscat said.
He also accused the Opposition of “not being ready to defend the national interest.”
Dr Muscat also said that a long term approach needs to be taken to the situation in North Africa, particularly in Libya, which needs to be encompassed within international norms.

Former Prime Minister Dr Lawrence Gonzi strongly criticised Prime Minister Muscat for his “inhumane” treatment of the migrants who arrived in Malta on Tuesday morning. “I have lived through worse than this. I know what it means. It is a great weight on your shoulders. It is at that moment that one must rise to the occasion,” Dr Gonzi said to the Prime Minister in Parliament.
“It is a dramatic moment. When a country, not just you, this is not just Joseph Muscat, I say it with respect, this decision is not your decision, this is our decision. You are involving us all in this decision. You are going to drag us down with this absurdity. Shame on us. We should be ashamed as a country,” Dr Gonzi said.
Dr Gonzi questioned why the Prime Minister had not raised these problems during the EU Council meeting he attended recently. “The government took the decision to send people back tonight. That is the story. This is not a question of bluff. We are talking about people’s lives,” Dr Gonzi said.
He also questioned how the government was not only ready to take an ethically and morally wrong decision, but an illegal one too. Dr Gonzi said that the migrants had not even been given the chance to seek asylum and argue their case.
“The Prime Minister needs to understand that a decision like this is not just his own, but it reflects on the whole population. It is not only Prime Minister Joseph Muscat who is paying but the political cost, but everyone is. You can pay the political price, but the human price is not negotiable,” Dr Gonzi insisted. He said that human beings should not be used as a tool to put an issue on the EU’s agenda. Dr Gonzi called it absurd that Malta has reached a situation where it is condemed by an international court.

In a statement issued by Alternattiva Demokratika, deputy chairperson Carmel Cacopardo said that “Prime Minister Joseph Muscat is causing a lot of damage to the country, who, instead of doing his duty, is going against the country’s international obligations.”
Regarding the threatening of push backs, he said that they are illegal, and by doing so, Dr Muscat would be denying migrants the right to apply for humanitarian protection, according to Maltese law.
“The Prime Minister should resend the millions of euros Malta was granted by the EU to be utilised by those persons who are seeking humanitarian protection.
“But Dr Muscat is only capable of playing with people’s emotions, portraying that there’s some massive crisis, and uses those who are vulnerable to gain popularity,” he said.

A petition is circulating on the internet, Save the Victims: Malta should not push-back migrants illegally. The online petition, posted on www.avaaz.org was subscribed by around 1,311 visitors in just a matter of a few hours.
A letter accompanying the petition states:

“The life of 102 individuals may be at risk unless we take action. A group of 102 migrants arrived on the coasts of Malta, a Mediterranean island on the southern border of the European Union, in the night between the 8th and 9th of July 2013.

“Press reports suggest two babies were on board among the 102 passengers. Less than six hours following arrival, news was leaked on the Maltese press that the Maltese government is considering sending all 102 migrants back to Libya, where it is believed the boat departed from – irrespective of the rights these individuals have at law and Malta’s obligations under international law.

“By signing this petition, you can help persuade Malta’s Government to change its course of action.”

A group of 62 migrants entered Malta early today at 5am (local time) after the AFM yesterday spent hours monitoring a boat out at sea. The group of migrants were escorted to the army’s Maritime base in Haywharf. A new born, and a pregnant migrant were on board among the migrants. There were 13 women and 49 men, 24 of whom were minors. The total of migrants that arrived in Malta in a matter of a week is 470.
The AFM’s Rescue and Coordination Centre (RCC-Malta) at Luqa Barracks, was earlier in the afternoon yesterday alerted about the dinghy adrift which position was confirmed an AFM Patrol Aircraft. Subsequently, Patrol Vessel P-23 was directed towards the position to render assistance. The dinghy was located around 75 nautical miles away from the south of Malta. According to the AFM, another two boats are currently being monitored.
Contacted and asked whether more migrants are expected to arrive due to the fact that two other boats are being monitored by the army, an AFM spokesman said that no assistance has been requested as yet.
Sources: www.euobserver.com; www.hrw.org; www.independent.com.mt