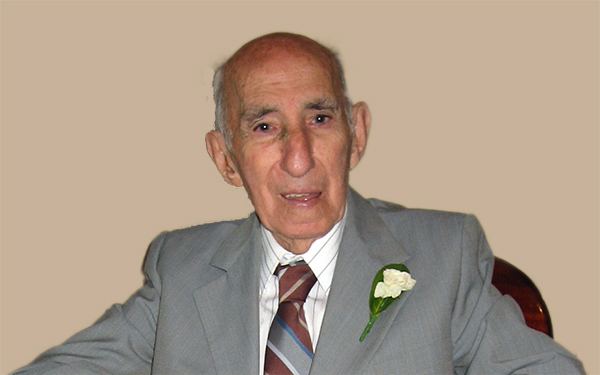 OBITUARY   On Sunday 16 June 2014 a prominent member of the Maltese community in Melbourne, Mr Frank Consiglio, passed away aged 92. Mr Consiglio served initially as Consul and then Consul-General of Malta in Victoria for a continuous period of 17 years in the 1970s and 80s.
Frank was born in Senglea, Malta on 11 April 1922, the fourth of five children. He completed a shipwright apprenticeship at the Malta Dockyard. Even in these early days he showed a keen interest in the welfare of fellow workers and was active in many organisations. He co-founded the Admiralty Apprentices and Ex-Apprentices Association. It was at this time that his lifelong interest and membership of the Malta Labour Party started, culminating later on in the award of life membership of the party.
Frank married his wife Frances in August 1947 and soon after they left Malta and arrived in Australia in November 1949, after a month long voyage on the Surriento. Within a year, they bought a block of land in Glenroy, a suburb of Melbourne, where they built the house that was to serve as their residence for the rest of his life.
On arrival in Australia, Frank worked as boilermaker with Marco Engineering in West Melbourne, and then on the wharves, when he joined the Shipwrights Union.  This was followed by various jobs, including selling advertising space. Frank and Frances even started a biscuit and cake-making business, working very hard. In 1968, they opened a Milk Bar business in Glenroy for about three years, and then took over an established Glenroy baby carriage and baby goods business called The Play Spot.
Frank was involved with Maltese associations, co-founding The Austral-Malta Association, which later became part of the Maltese Community Council of Victoria that was established in 1958. With the assistance of his very good friend, the late Alfred Dougall, he founded what was called The Friends of the Malta Labour Party.
In 1971, Frank was appointed Consul for the Republic of Malta to represent all Maltese interests in Victoria, South Australia and Western Australia. In time, the post was raised to that of Consul-General. He served under two different Maltese Administrations. This career lasted 17 years until 1989 – the longest career of any representative of the Maltese Government in Australia.
During his tenure as Consul and Consul-General, he had the occasion of welcoming to Australia both Prime Minister Dominic Mintoff and President Agatha Barbara. In 1989  Frank retired from his consular role.
Frank was a humble person. He was recruited from the ranks of the migrants themselves and understood the average Maltese migrant’s needs. He always tried to do what he could for his Maltese compatriots, always championing their cause as far as he could. In fact, he made it a point to meet with every boat that arrived in Melbourne bringing Maltese migrants to Australia and helped them to settle and start a family.
He was particularly helpful to the Maltese Community Council of Victoria, and would be seen at the annual fund-raising fete, with his wife, Frances, at their stalls, selling baby clothes, or at the bigilla stall selling the traditional broad beans based delicacy over those busy week-ends to raise funds for the building of the Maltese Centre in Parkville.
Among his other interests, Frank enjoyed writing to the Maltese Herald, items which included letters to the editor, poetry and especially his own creation of a humorous column English at its Best, where he provided literal translation of Maltese into English – which one might imagine wasn’t very far from the sort of ‘Manglish’ spoken by some Maltese migrants at the time.
The Maltese community will remember Frank Consiglio as a staunch supporter of Maltese migrants, a person who dedicated a considerable portion of his life to serve the community.
Frank is survived by his wife, Frances, his two sons, Colin and his wife Anne and Charlie and his wife Diane, his grandchildren and his great-grandchildren.
O Lord, grant him eternal rest.
Previous
Tislima lil Noè Bonnici – 'kien qisu enċiklopedija'
Next
Alfred Fenech (1937-2014) – a stalwart advocate for the Maltese in NSW