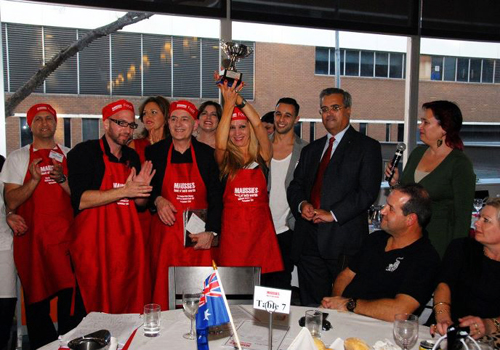 The inaugural Maussies Cook Off, Tan-Nanna Ħelu Manna, held yesterday at the William Angliss Institute in Melbourne, was a great success. Ten teams made up of three generations of Maltese Australians, cooked Maltese traditional food for over 200 people, who then participated in selecting the winning team.

The winning menu combination consisted of Barbuljata (Scrambled Eggs with tomatoes), Ġuża’s Ravioli and Imqaret (Date Slice) produced by Ġuża’s Table, a team made up of husband and wife, Emmanuel and Maria Cilia and their son Dion.

The Caruana Experience Band made up of Nicky, Michael and Nicol Caruana rocked the house and kept everyone entertained. The Maussies Cook Off was also a fundraiser for Intercept Poverty, in aid of Maltese run orphanages in Ethiopia and raised a total of $425.

The event was filmed and will feature in the popular Maltese TV program, Xarabank. It will also feature in a 10-page spread in SBS Feast Magazine in the coming months.

The winning teams were: