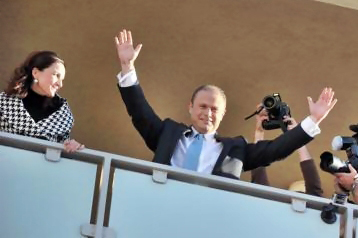 After serving for the past 15 years in opposition, the Labour Party has won a landslide general election victory, sweeping to power with 55% of primary votes (170,642 votes) and a margin of 37,163 votes, the largest obtained by a party in Malta’s post-independence history. The Nationalist Party won 43% (133,479 votes). The third party, Alternattiva Demoktarika (AD), won 1.8% (5,573) but none of their candidates will be elected.

Labour is expected to have a parliamentary majority of up to nine seats, the biggest since 1955. Current predictions are that the new Labour government will have 38 seats in parliament to the opposition’s 29, after a proportionality adjustment of two additional seats for the PN.

Prime Minister Elect Dr Joseph Muscat said he was ‘humbled’ by the result but promised to work with the Opposition and give the people Malta for all the Maltese. A large crowd of Labour Party supporters assembled outside Labour headquarters in Mile End, Hamrun, beeping their horns and waving party and Maltese flags.

Prime Minister Lawrence Gonzi conceded defeat after the first sample of votes as the sorting of ballot papers started. He telephoned Joseph Muscat to congratulate him.

In the Naxxar counting hall there were euphoric Labour party agents hugged each other with tears in their eyes. Fireworks were let off in some localities. The election results confirmed what the pre-election polls has been clearly indicating, a comfortable Labour victory.

Governing for all Maltese

Dr Muscat made his long-awaited appearance on the balcony of Labour headquarters yesterday afternoon to acknowledge the applause and cheers of thousands of people gathered at the Mile End in Hamrun. Introduced as Malta’s prime minister, Dr Muscat said Labour was elected as a movement, and would govern as a movement.

“The sun has not risen for half of Malta, but for Malta as a whole, both for those who voted for change as well as our fellow Maltese who did not,” he said.

“This was not a Malta for the victors, but Malta Tagħna Lkoll (Malta is for all of us), he said to applause. This was the strongest mandate given by the people to a government since independence. It was a mandate which was so strong that it humbled him,” said Dr Muscat

“The people have loaned us their trust to represent them all and that is what we will do.” He promised that he would work as hard as he could for no one to feel a stranger in his own country. “We will show that we believed what we campaigned for,” he said.

He urged his listeners to help ensure that this was a government which would not cut itself off from the people. He expressed particular gratitude to young people for having been protagonists, not spectators. “Now extend the arm of friendship for everyone,” he stressed to cheering.

PN Leader to step down

Nationalist Party leader outgoing Prime Minister, Dr Lawrence Gonzi, announced yesterday that he assumed complete and total responsibility for the general election defeat and will be stepping down from the party leadership. He confirmed that he would not be a candidate when the party held the election of its leader and deputy leader as it was required to do in terms of its statute after a general election.

He also told a press conference yesterday that the party accepted the people’s verdict. “I shoulder total and complete responsibility for what has happened,” Dr Gonzi said.

Dr Gonzi said he was not completely surprised by the extent of the election defeat, but it had been difficult to make a complete assessment because of the large number of undecided voters.

“I promise that my colleagues and myself will continue to serve the people and their country. This country had potential and can overcome its challenges. We will continue to work for the country’s progress, this time from the Opposition. We will serve with honesty and loyalty,” Dr Gonzi said.

Dr Gonzi congratulated the Labour Party and its leader Joseph Muscat on their victory. “He is now the prime minister, and he deserves respect and recognition as the person who has to lead the country in the challenges which it faces. The burden is a heavy one,” he said.

He thanked all those who had voted for the PN and said his message was one of courage. “Stay positive, continue believing in the country which can overcome the rough weather which engulfed other countries. The PN will need to re-examine itself, re-establish its roots and renew itself,” he said.

He said he would not participate in the process for the election of a new leader of the party but would do his part to ensure that the party was modernised.

Historical perspective of the landslide victory

The massive margin of 36,475 votes obtained by Labour in Saturday’s election was the largest obtained by a party in Malta’s post-independence history. The margins between the political parties have varied substantially, particularly in recent elections.

The Labour Party’s biggest victory was in 1945 when it won 76.2 percent of the vote, but that was an unusual contest, with the PN and the Constitutional Party having refused to take part, insisting that Malta should first be given a new constitution. That was the general election which saw Dom Mintoff elected for the first time.

The second best electoral result for the Labour Party was in 1947 with 59.9% of the vote (compared to 18% for the PN, its worse result, conditioned by the post-war situation). The difference between the parties was 44,104 votes.

The PN did best in 1932 when it won 59.8% of the vote after a general election which was delayed by constitutional upheaval.

The PN had a five-seat parliamentary majority after the 1998 and 2003 general elections (35 to 30), the biggest since 1966 when the PN had 28 seats to Labour’s 22 when the Chamber had 50 seats. The difference varied after previous elections but in those cases more than two parties made it to parliament.