Major cabinet reshuffle in Malta after one year in government 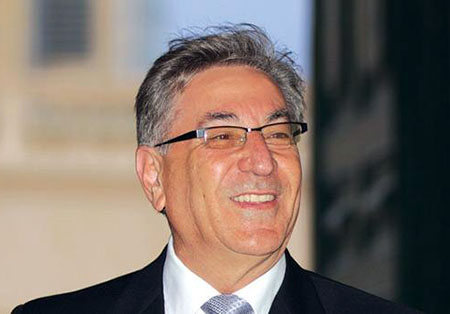 Resignation letter
Earlier in the day, Dr Godfrey Farrugia submitted his resignation as health minister in a letter to Dr  Muscat, which was published on Facebook by his partner Marlene Farrugia, a fellow Labour MP, and Mr Mercieca had confirmed to timesofmalta.com that although he was still serving, he had informed Dr Muscat of his intention to resign “weeks ago”.
In his resignation letter, Dr Farrugia thanked the Prime Minister for offering him the post of Social Policy Minister but said he could not accept the position.
Yesterday afternoon he had a meeting with Dr Muscat at Girgenti which lasted more than an hour. According to timesofmalta.com, on coming out of the Palace just after 6pm, he looked shaken as he walked to a car some 800 metres a way where Ms Farrugia was waiting.
Mr Konrad Mizzi, who will be taking over the health portfolio responsibilities, was present for part of the meeting. He told journalists as he walked out of the Palace that he was very happy with his new responsibilities.
“There is a lot of work to do and the challenges are big…” He said these challenges were discussed during his meeting with Dr Muscat and Dr Farrugia and said he will be meeting Dr Farrugia for a handover soon. He said he was willing to work with all stakeholders.
In his letter to Dr Muscat, Dr Farrugia said  that when he became Health Minister, he saw this as a golden opportunity to strengthen his services for the dignity and needs of patients and said he was convinced that in the year he had been in office he and his colleagues had created the basis for the sector to become sustainable.
Opposition leader Dr Simon Busuttil tweeted “Godfrey Farrugia’s resignation: Not a clean bill of health for Muscat’s one year old government.”
Mr Mercieca told timesofmalta.com that he retained his job as he had still not received a reply from the Prime Minister. He said he had also asked Dr Muscat not to consider him for the new Cabinet as his vocation was ophthalmology.
A family doctor in Zebbug, Dr Farrugia last April became emotional and shed some tears as he expressed his sadness at having had to give up his profession to serve as minister.
His one-year tenure was surrounded by controversy with the appointment by the Prime Minister of former EU Commissioner John Dalli  to head a reform body within the administration of Mater Dei Hospital. Last January the Prime Minister ordered that a tent set up outside Mater Dei Hospital be removed. The tent was set up to house the hospital’s reception area in case of an influx of patients suffering from influenza.
Dr Farrugia started his political career in local councils and was repeatedly elected mayor Zebbug. He is president of various organisations.
Asked about resignation reports in February, Mr Mercieca was evasive and said he was serving as parliamentary secretary for the elderly and would continue to serve in that role until the prime minister felt otherwise. His appointment has been mired in controversy since an investigation by The Sunday Times of Malta last year found he was still conducting eye operations, earning €3,600 in a morning in breach of the Code of Ethics. The issue was later discussed between Mr Mercieca and the prime minister and Mr Mercieca agreed to continue to work free of charge at Mater Dei.
PN Statement
The Nationalist Party said in a statement that the resignations continued to uncover the bad qualities of Dr Muscat’s management style.
Even those who were close to him were now providing proof that Dr Muscat first used you then threw you away. This was what he did with Dr Farrugia and Mr Mercieca and what he had lso done with the residents of the south with his decision to anchor an LNG storage tank in Marsaxlokk Bay, the party said.
It said that not only did Dr Muscat put all imaginable spokes in the wheel for Dr Farrugia not to be able to implement his responsibilities as Health Minister, he also hid for several week Mr Mercieca’s resignation from Cabinet and the Maltese people.
A Prime Minister who hid from the people a Cabinet minister’s resignation was a Prime Minister who placed his political interests before respect towards the people he was leading.
Dr Muscat had promised the best Cabinet in Maltese history. After just a year, this was another promise from a series which had already evaporated, the PN said.
[Sources: independent.com.mt and timesofmalta.com]