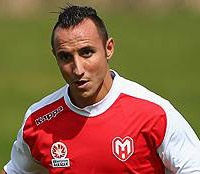 Melbourne Heart FC announced on its website yesterday that it has strengthened its strike force for the Hyundai A-League 2013-14 season, signing Maltese national football team captain Michael Mifsud on a one-season deal.

Mifsud, 32, remains Malta’s most prominent footballer and is the country’s all-time top scorer, twice being crowned Maltese Sports Person of the Year during an international career that spans 13 years and has yielded 37 goals in 99 appearances.

Melbourne Heart FC Head Coach John Aloisi is excited at Mifsud’s arrival. “Michael has scored goals at whatever level he has played at,” Aloisi said. “He is an exciting footballer and will be a dynamic influence in our attack. As the captain of Malta, he has played against the very best teams in the world and held his own. It’s not easy to lead the line against the likes of Italy and Croatia, and test those defences, something which he has done regularly.”

On Wednesday morning he was getting his first glimpse of his new surroundings at Melbourne Heart’s Latrobe University training ground and meeting his new teammates after inking a one-year deal with the A-League club.

At 1.65 metres tall, the most noticeable thing about Mifsud is his height. Or lack of it. But that has never stopped him from scoring a steady stream of goals at a high level in various European leagues.

Mifsud joins the Red and White with a recognised pedigree at club and international level, having last week started in narrow losses against Denmark and Bulgaria. The Maltese national captain emerged in the Bundesliga with Kaiserslautern as a teenager, playing alongside Miroslav Klose, one of Germany’s greatest goalscorers. He has also had spells in the English Championship with Coventry City, Lillestroem in Norway (where he was a teammate of Socceroos Kasey Wehrman and Shane Stefanutto) before returning to his homeland with Valletta in recent years.

Now he is looking to make an impact in the Australian competition, a league he knows at least in second-hand form as two of his international colleagues, Central Coast Mariners captain John Hutchinson and Wellington Phoenix utility Manny Muscat, also play for Malta.

Described as ‘The Mosquito’ for his diminutive stature and blistering speed, Mifsud’s mobility allows him to play anywhere in attack, although he has carved out his career as a central striker.

Mifsud’s best attribute is his pace, but he is also an efficient finisher. His biggest claim to fame at club level is his feat of scoring twice for Coventry City when they knocked Manchester United out of the Carling Cup.

The Maltese captain helped his national team to the country’s first World Cup qualifying win in 20 years with a goal against Armenia last June.