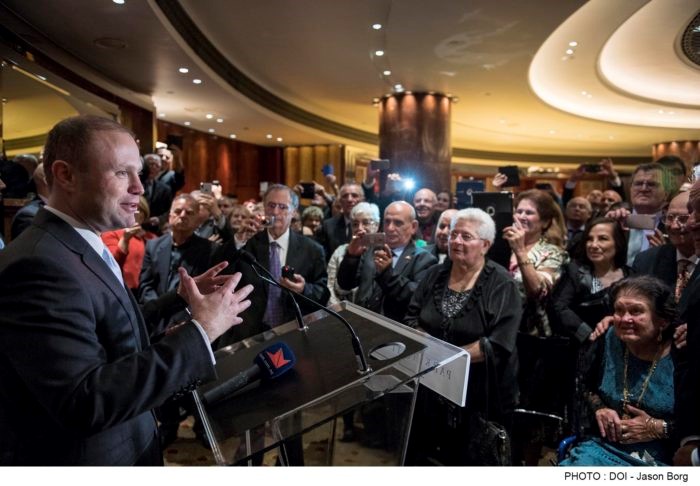 On Thursday 29 March Malta’s Prime Minister Dr Joseph Muscat, accompanied by his wife, Mrs Michelle Muscat, and their two daughters, met with members of the Maltese community in Melbourne at a reception that he hosted at a city hotel. Dr Muscat’s delegation included Mr Carmelo Abela, Minister of Foreign Affairs and Trade Promotion, and Clifton Grima, Parliamentary Secretary for Youth, Sport and Voluntary Organizations.
In his address, the Prime Minister urged the Maltese community to continue to take part in activities organised by the Maltese for the Maltese. He said that the Maltese in Australia should not be a minority group but continue to be active in the community and the country’s social life.
Dr Muscat said that, while many Maltese had left their country of birth to find work in this continent, now, ironically, their children and grandchildren are considering coming to Malta to find work.
Among those present at the reception were four members of the Executive Committee of the Maltese Community Council of Victoria.
Melbourne was the first stop in Australia for Dr Muscat, who is on a visit to Australia to attend the opening ceremony of the Commonwealth Games in the Gold Coast, south of Brisbane, Queensland.
While in Melbourne, Dr Muscat also met with Mr Daniel Andrews, the Premier of the State of Victoria, and business leaders. His meeting with the Premier focused on various economic sectors.

Dr Muscat addressing the audience at the welcome reception

Dr Muscat with his wife and daughters