Malta’s President given a warm welcome in Melbourne 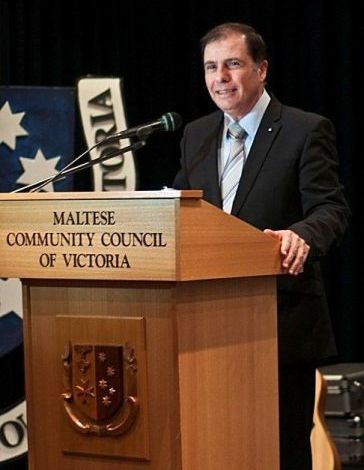 The large Maltese community in Melbourne gave the President of Malta, H.E. Dr George Abela, a memorable warm welcome at a well-attended reception held at Taylors Lakes, a suburb in the west of Melbourne, on Wednesday 23 March, organised by the Maltese Community Council of Victoria during his official state visit to Australia.

On behalf of the community, the MCCV President, Professor Maurice Cauchi welcomed the President who was accompanied by his wife, Mrs Margaret Abela, and his delegation, which included the Hon. Dolores Cristina, Minister of Education, Employment and Family.

Professor Cauchi highlighted the fact that more than 40 percent of the Maltese living in Australia reside in the state of Victoria. This meant that Melbourne is the state capital city in Australia with the largest Maltese community.

The significance of the President’s visit, Professor Cauchi said, is that it “reinforces the concept so dear to us, that we were and we remained Maltese, just as much as the Maltese who live in Malta and never had the experience that we had.”

“Since the last Convention of the Maltese Living Abroad held in Malta a year ago, the concept of ‘Greater Malta’, that is, Malta which includes all Maltese living abroad, wherever they live, has been accepted by everyone,” added Professor Cauchi. “The visit to Australia by the President of ‘Greater Malta’ continues to strengthen this concept and unite us as one people,” he said.

Professor Cauchi referred to the love and affection that the Maltese, who have been living in Australia for over 50 years, still strongly feel towards Malta and described the relationship by quoting what an emigrant had said some years ago: “I consider Malta as my mother and Australia as my wife.”

Refering to the successes of the Maltese in Australia, Professor Cauchi said that the Maltese community is proud of its achievements in Australia, from the first generation of migrants, who had struggled to establish themselves, to their children and grandchildren, who achieved considerable success in society.

“It is hoped that, after this visit among us, the President will return to Malta as an ambassador for all Maltese living overseas,” concluded Professor Cauchi.

President Abela started his address by underlining his personal connection with Melbourne and reminiscing about his childhood experience while living for a few short years in the Melbourne suburbs of Fitzroy and Collingwood. He felt that this experience had helped his family grow into what it is today.

Referring to the long sea voyages to Australia that, due to the economic situation in Malta, migrants in the 1950s and 1960s had to undertake with financial assistance, President Abela said he treasures his late father’s passport, which has a rubberstamp of the ship, Asturias, on which his father had travelled to Australia.

President Abela indicated that leaving Melbourne till last during his state visit was intentional and it was very much a case of leaving the best till last in order to send a strong signal that the large community of over 40 percent of our migrants lives there. “We wanted to come here to be with you, share our happiness with you, and the sorrow that you sometimes went through, and together share our experiences,” said the President. President Abela said that he was delighted to hear each of these dignitaries speaking glowingly about the Maltese community in Australia using the highest words of praise. According to the President, this was not simply due to the Maltese community often being a constituency of these people, particularly Prime Minister Gillard, but also due to their creation of the story of their own success. Everyone in the various walks of life, in business, normal work, and the professions, made their mark and their success story wherever they are today.

President Abela stressed that it is important that one does not live in the 1950s or 1960s and keep thinking of Malta as it was then. Malta has progressed and significantly so since then, just as the Maltese in Australia had done.

President Abela said that, as a reflection from his meetings with the Maltese communities in Australia, his message to the Maltese community was not merely one of staying together but one of unity in which no energy is wasted in piques and trivialities between one another. In such a large continent, even though the Maltese community is large, it is important that “we combine our strength and energies to move forward,” said the President.

Speaking about the future of Maltese associations and community Councils and their role in strengthening the Maltese traditions in Australia, President Abela emphasised the importance of introducing new blood, the youth from the younger generations. This would ensure that the community remains vibrant and strong and continues to make an impact through subsequent generations who continue to keep such wonderful traditions alive, including family and religious values and the Maltese language. President Abela said that, since the Maltese language distinguishes us from other peoples, it is important that our children and their children speak our language. While the children may find it difficult to learn how to speak the language, the President noted that they were not finding it as difficult to understand it. If we treasure our language in our homes and use it when we speak with our children and their children, at least we get to the point where they can understand it and their parents’ Maltese roots, said the President.

Refering to the celebration of the traditional Maltese “festi” in Melbourne, President Abela said that he will be taking back wonderful memories with him but he stressed the importance of celebrating in a civil manner, so they are enjoyed by everyone.

President Abela thanked the Maltese associations and the Maltese Community Council of Victoria for keeping these Maltese traditions alive and strong in Australia.

President Abela referred to the proposed Council of Maltese Living Abroad and said that the time has certainly come at last to establish the Council by legislation to regulate the relations with Maltese communities overseas, as was proposed by the Government at the last Convention. He hoped that no more time is wasted in setting it up.

In a reference to the current situation in the Mediterranean arising from the crisis in Libya, President Abela said that, while small in size, Malta is still relevant as a country in today’s world events due to its strategic and geographical position. He referred to the praise that the international community heaped on Malta for everything it has done in evacuating various workers from Libya.

President Abela thanked the audience on behalf of his wife and the delegation for the wonderful opportuni
ty to meet with them. He said that he would be leaving Australia much better than when he arrived thanks to direct contact that he is lucky to have had with the Maltese community so early in his presidency.

In her address to the gathering, Minister Cristina (pictured below making a presentation of books for the MCCV Library to Prof. Cauchi) thanked those present for the really wonderful welcome they had received. She said that, if asked what would be the dearest thing she would be taking back with her, it would undoubtedly be her memories of how, whenever they entered a room to meet with the Maltese community, she suddenly felt Maltese blood boiling, something really incredible. “Although I was expecting it, I did not expect it to hit me with such force,” said the Minister. She felt sure that, if she had to walk the streets of Melbourne, she would be able to recognise the Maltese because for some reason or other they remained really Maltese, even apparently in their attitude. Minister Cristina said that she really enjoyed meeting generations who were not born in Malta and yet they have a strong attraction towards Malta and their roots. In particular, she was delighted to see young children who greeted her in some places speaking Maltese in their sweet voices.

Minister Cristina formally passed on greetings from the Maltese Government and from the Deputy Prime Minister and Minister of Foreign Affairs, Dr Tonio Borg, who could not make the trip due to the situation in the Mediterranean.

One of the reasons for the Minister’s visit was to conduct community consultation meetings on behalf of Minister Borg relating to his project aimed at passing a law to establish the Council of the Maltese Living Abroad and set up the Maltese Cultural Institute. “Naturally this law is an expression not only of solidarity but also of what Professor Cauchi talked about, that you are really part of the Maltese people, even though you live so far away from us,” said Minister Cristina.

Minister Cristina ended her address by making a hypothetical point. If she had to migrate to a new country, which she did not know what it would offer, even though it may be well-known for the opportunities that it offers, it would still cause her fear and trepidation, as many Maltese would have felt when migrating to Australia. However, if she had to arrive in that country and be greeted by members of the Maltese community, she would undoubtedly feel really at home and part of the large Maltese and Gozitan family.

Minister Cristina met with the Maltese community in Melbourne the following morning during a well-attended consultation meeting held at the Maltese Community Centre in Parkville. In addition to the proposed Council of the Maltese Living Abroad and Maltese Cultural Institute the meeting also covered other topics raised by the representatives of the MCCV Executive Committee and of the various MCCV-affiliated associations as well as local Maltese radio broadcasters.

Links to Transcription of Addresses made at the Reception in Maltese