Maltese cyclists on the Betfair Lifecycle Challenge arrive in Melbourne 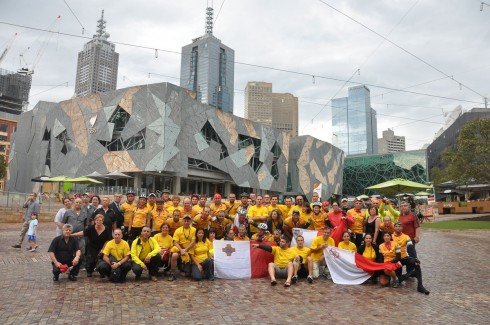 The Betfair Lifecycle Challenge 2012 took place in Australia. During a ten day event 33 cyclists from Malta took part cycling from Brisbane to Melbourne to raise funds for renal disease. The team arrived in Melbourne this afternoon (local time). Commencing the rather hilly 177km ride on the last leg from Mansfield to Melbourne at about 4.00 am, the cyclists started arriving in Melbourne’s Federation Square at about 1.00 pm, to be welcomed by members of the backup team, relatives and friends.
The event started on Sunday, 28 October 2012 from the South Bank Park in Brisbane. The team had left Malta for Australia on 25 October and arrived in Brisbane in the early hours of this morning local time. Their cycling journey began 30 hours later.
This was LifeCycle’s 14th challenge and the first time the event has taken place in the Southern Hemisphere. The route was a 1,900 km ride on mountain bikes between Brisbane and Melbourne in just 10 days. The team consisted of 33 cyclists, 16 Support staff and 2 camera crew. The route details and related internet links are as follows:

Lifecycle was founded in Malta in 1999. The Betfair Lifecycle Challenge grew from the efforts of a group of dedicated volunteers who have endeavoured to raise awareness on renal disease. This year’s 14th edition of the Lifecycle Challenge involves a gruelling 1,900-kilometre journey from Brisbane to Melbourne.
Cyclists with different levels of ability and other members of the support team, including medical doctors provideed logistical support and assisted with common ailments participants experienced during the testing 10-day venture in Australia.
The annual Lifecycle aims to generate funds for medical equipment at the Renal Unit and strives for improved quality of life of patients suffering from the debilitating illness by allowing them access to the highest standards of healthcare.
The MCCV held a reception for the Lifecycle team upon their arrival on 6 November at the Maltese Centre in Parkville, where they are staying for two nights. The ‘Klabb Għannejja Maltin’ based in St Albans, a western suburb of Melbourne, organised a club event to welcome the Lifecycle team and raise funds for the challenge.