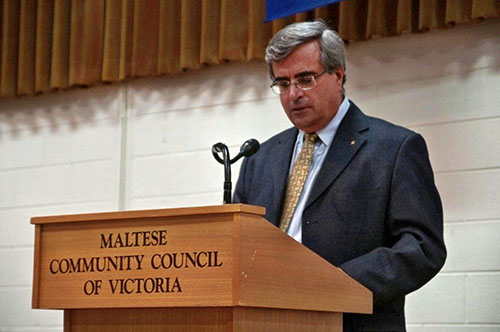 In his speech, MCCV President, Professor Maurice Cauchi said that, during his term of office, Mr Mifsud been indefatigable in making himself available to members of the Maltese community, not merely to serve their needs in issues relating strictly to consular matters, but much more broadly indeed. He referred to Mr Mifsud’s religious attendance at functions organised by the various Maltese organisations which often consumed most of his weekends, normally cherished by most of us as time to relax and spend time with one’s own family.

Prof. Cauchi then spoke of Mr Mifsud’s encouragement of cultural activities to ensure that Maltese culture is maintained within the community. Mr Mifsud has extensive knowledge of Maltese history, particularly of the period of the Second World War. He has been a regular presenter of talks at the monthly meetings of the Maltese Historical Association, giving interesting talks on his favourite topics, particularly relating to the role of Malta in the Second World War. One of his favourite hobbies is constructing model aeroplanes of that era, building a collection running into the hundreds and in developing this passion became an expert on the subject.

Prof. Cauchi made a special mention of a particular initiative for which Mr Mifsud’s contribution to the Maltese community in Victoria will be remembered, refering to his organisation last year of a special celebration on the occasion of the 70th anniversary of the award of the George Cross to Malta in April 1942. With the assistance of a specially selected committee, he organised a program of activities that ran over a two-week period, culminating in a photographic exhibition of wartime images and a special commemoration function held in this very hall and attended by special guests from both sides of the Victorian Parliament. “We had not seen such a huge turnout by the Maltese community or a function at the Maltese Centre for quite some time, with standing room only for late arrivals and some even having to stay out in the foyer. It was a truly memorable occasion,” said Prof. Cauchi.

Prof Cauchi then referred to Mr Mifsud’s involvement more recently in relation to the dire situation relating to maintenance of Maltese language teaching, and particularly at VCE level. Mr Mifsud has been at the forefront of ensuring that no stone is left unturned in his effort to convince the Maltese community of the necessity to encourage our children to persist in their effort to learn Maltese. He managed to forge an effective relationship with the Principal of the Victorian School of Languages to ensure the continuation of the teaching of the Maltese language in that school. For some time Mr Mifsud even rolled up his sleeves and took it upon himself to teach Maltese to one of the adult classes held at the Maltese Centre.

Prof. Cauchi said that Mr Mifsud was always helpful whenever the MCCV asked for his assistance. The latest example of this was his participation in examining the applications for the Bishop Joe Grech Scholarship in the process of selecting the successful candidate. The MCCV always appreciated its close relationship with the Consulate in Victoria. He said that, with people like Mr Mifsud, such a relationship has been not only been useful but actually pleasurable and productive.

Finally, Prof. Cauchi thanked Mr Mifsud for his contributions to Maltese society in Victoria. “We regret that it has been terminated, but hope that he will continue to serve as an ambassador for the Maltese living in Australia, and especially those in Victoria, when he goes back home to Malta,” he said.

In his farewell speech, Mr Mifsud recalled his arrival in Melbourne on 28 November 2009 and taking office three days later. He then gave an account of his Maltese community activities attendance record during his term of office: 206 celebrations of Maltese feasts and 179 other attendances in activities which were not feasts. He also participated in 170 consular activities and had about 300 meetings to promote trade with Malta. Moreover, his consulate processed thousands of applications for Maltese passport and citizenships, responded to thousands of phone enquiries.

Mr Mifsud then spoke about the other highlights of his tenure of office:

In April 2012 the celebration of the 70th anniversary of the granting of the George Cross to Malta, amalgamating the annual activities held for this commemoration with a purposely organized activity by the Consulate. These were a big success and for the one organized by the Consulate, we packed this hall and we saw the Maltese Film Heroes in the Sky.

In September 2012 the celebration of the National Day of Malta, organized and funded with the Victorian Government. He was planning to have this year’s national day by an event organised by the Maltese Community but time was not on his side.

During his stay, he made every possible effort to increase cultural awareness. Apart form his attendance with his wife at festa celebrations, he made talks on Maltese Folklore, the Air war in Malta during the Second World War and the George Cross. The talks were organized by the Maltese Historical Association and he was always pleased with the numerous attendances.

In order to enhance Maltese Australian relations, and in particular, with the State of Victoria, he gave a talk at the Shrine of Remembrance about the Anzacs and Malta. This was a well attended event. One must realize that, although Malta’s contribution to the Gallipoli campaign was substantial, to the tune of 80,000 wounded were cared for in Malta during the campaign, little is known about this in Australian quarters. In this regard, the Malta Post and Australia Post will be cooperating in a joint issue on the centenary of Gallipoli in 2015.

Under his watch, a Victorian parliament Friendship Group Malta was set up. Mr Mifsud said he is proud to have worked with this group and pleased that some members of this group made a visit to Malta last July and they were impressed with our Island and its culture. He is confident that such contacts will bear fruit and enhance relations between Victoria and Malta.

On the educational level, after he approached Deakin University, and after long discussions between the University of Malta and that of Deakin, a memorandum of Understanding was signed which will enable student form both countries to study in the other University. Although at a very early stage, a similar agreement is being discussed with Monash University.

Mr Mifsud said that he was honoured to be part of the Bishop Joe Grech Scholarship Award Selection Committee. This Award was set up by the MCCV to sponsor young people to go to Malta and immerse themselves in our culture and their roots. The winner is required to engage themselves in the Maltese Community when they return.

In trade relations, Mr Mifsud said that he was proud that an Australian Estate Agency has se
t up a back office work concern in Malta. This was done since this company found it more economical to work from Malta. On the other hand, contacts were established between a Maltese-Australian businessman in Australia and a company in Malta which resulted in the importation into Australia of galletti (Maltese crackers) and other packed snacks, a business relationship that has grown and is flourishing.

On the question of the teaching of the Maltese Language, Mr Mifsud said that much work has been done by all concerned. We were at a point of losing VCAA accreditation since we were not finding 15 students to sit for the VCE. Efforts were made by all teachers concerned to address the situation and he joined the teachers in discussing solutions with the Victorian School of Languages. The efforts from the teachers’ side included a publicity campaign and now we are proud to say that the number of children studying Maltese increased three fold and we had added adult’s classes.

Mr Mifsud thanked all the teachers involved for their great strides and efforts. He personally knew what big personal sacrifices they made to keep the teaching of Maltese going, having for a time been himself helping out by teaching Maltese to Adults. He encouraged the Maltese to send their grandkids to learn Maltese and secure the future of the language in Australia.

Mr Mifsud referred to a request he had received from the Maltese Museum of Immigration, when he initiated contacts between the Maltese Museum and the Melbourne Immigration Museum to cooperate and exchange information. Discussions are still going on and he hoped that these will bear fruit.

Mr Mifsud referred to the introduction of captions on the Maltese TV news programme to identify persons being interviewed, following his contacting PBS in Malta and highlighting this deficiency.

Mr Mifsud said that it was one of his wishes to see the three Maltese bands in Victoria give a joint concert, and he still hopes that the concert will still be held.

Mr Mifsud thanked the radio stations which transmit in the Maltese language. He participated in interviews and talk backs on various stations and this helped him to keep contact with the Maltese community.

He thanked the MCCV for their continued cooperation and for the projects carried out together. He also gave his sincere thanks to the Missionary Society of St Paul for their dedication and hard work in the Maltese Community.

Mr Mifsud also thanked the whole Maltese community for its support during the past almost 4 years, and all those who helped him and my wife to settle in, and live the Australian way and to serve the community.

He finally thanked his staff at the Consulate: Miriam Cassar “the strongest pillar in the consulate” with her invaluable 27 years of service in the consulate; Dr Gioconda Schembri with her legal and technical support that is crucial to solve certain problems, recently blessed with baby Thomas; and the newest member, Pauline Theuma, who has settled into her role very well, filling in for Dr Schembri.

On a personal note, he thanked his wife who constantly supported him during her stay with him in the last 3 years. Together they learned and lived the Australian way of life.

Mr Mifsud concluded that this posting was priceless to them and he is going back home with his head held up high, knowing that he did everything in his power to serve and assist the Maltese Community, who are the judges of his efforts. He said that he will keep the community close to his heart. “As much as I am looking forward to join my family in 10 days’ time, just as much I regret leaving a community which I have grown to love. I hope to meet many of you in Malta in the future,” concluded Mr Mifsud.

Prof. Cauchi then made a presentation of a farewell gift to Mr Mifsud, consisting of a model aeroplane kit.

Mr George Saliba OAM was MC for the evening.