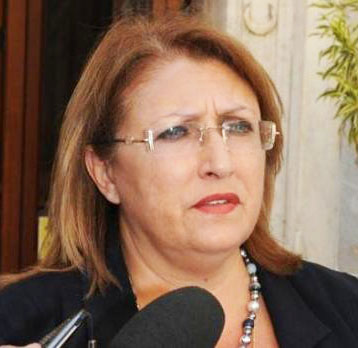 NEWS   The term of office of the current President of Malta, Dr George Abela comes to an end on 4 April 2014. For several weeks rumours have been going around about who will be replacing him. Prime Minister Dr Joseph Muscat has been keeping his cards very close to his chest and recently indicated that he would be releasing the name of the nominee in a matter of days.
Initially the front runner for the presidential role appeared to be the Minister of Foreign Affairs, Dr George Vella, with one Labour Party activist reported as saying that it would be a fitting end to a long career in politics, as the medical doctor from Żejtun will turn 73 in April.

Reports surfaced in the Maltese media in the last couple of days that Family Minister Marie-Louise Coleiro Preca is now the firm favourite for the post. This has come as a surprise to many for three key reasons: she is considered an asset to the Cabinet and her appointment as President would be a great loss to the Government, she is considered young at 55, and she received the most votes for Labour after Party Leader Dr Joseph Muscat. In other words, Ms Coleiro Preca still has a lot to offer as a Minister and if she were to be appointed, she would be the youngest president ever appointed. She would be expected to be apolitical, terminating a long political career spanning almost four decades.
Times of Malta columnist and former Labour finance minister Mr Lino Spiteri believes that appointing Ms Coleiro Preca president would be “a mistake”. In his column published yesterday, he described her as the Cabinet’s “most respected member” and “a champion of the underprivileged”. He wrote that “As president, she will have to give up most of that. She will raise a voice for social justice, now and then. But she will not be able to take effective action.”
In a news article published today in The Malta Independent online, journalist Neil Camilleri expressed the view that the Prime Minister’s change of mind away from Dr George Vella could be to avoid clashing with the hardcore Mintoffian elements within the Labour Party. Sources within the Labour Party revealed that ‘Mintoffjani’ within the party still look upon the Foreign Affairs Minister with scepticism following his fallout with Dom Mintoff when he was Deputy Leader.
The Malta Independent sources confirmed that Dr Vella was looking forward to the post, but, following the internal wrangle for the Presidency, the minister stated in an interview last Sunday that “he is happy where he is now.” However, according to the newspaper’s sources many Mintoffians, who still hold sway inside the PL and the highest levels of government were vehemently against Dr Vella’s nomination, particularly because of his rocky relationship with former Prime Minister Dom Mintoff.
Back in 1997 Dom Mintoff and George Vella were engaged in many an argument in Parliament in the months before the former Prime Minister voted against the government of Dr Alfred Sant leading to Labour’s downfall after 22 months in government and another fifteen year in opposition.
At the time Dr Vella was Deputy Prime Minister and was responsible for Parliamentary Affairs. On one occasion in November 1997 Mr Mintoff accused Dr Vella of snubbing him and refusing a meeting. “We are only colleagues in the sense that we sit on the same side in Parliament but not in the sense of two people working in the same party who are supposed to be doing the same thing,” the former Prime Minister had lashed out. Later in the evening during an MLP parliamentary group meeting, Dr Vella reportedly said that he would forgive Mr Mintoff but he would not forget what he had said.
In March 2003 PN Sunday newspaper il-Mument reported that when the PL discussed the possibility of leaving the door open for Dom Mintoff to return to the party, Dr Vella had replied: “it’s either him or me.” In a 2012 interview he said that he did not have a personal grudge on the late Mr Mintoff but admitted that he “the wounds still existed.”
Dr Vella was offered the post of MLP leader three other times: in 1992 when he was personally endorsed by former prime minister and partly leader Dr Karmenu Mifsud Bonnici, and again in 2003 and 2005. He refused every time.
On the other hand, Family Minister Ms Coleiro Preca is very well liked by the Mintoffians, mainly because she was PL Secretary General during Mr Mintoff’s last years as Prime Minister and because she is known to have had a good relationship with him. Ms Coleiro Preca has also appointed Mintoff’s daughter, Yana Bland Mintoff, as an advisor on the poverty strategy.
PN not consulted on Coleiro Preca’s ‘nomination’ for President
In the meantime, PN Leader Dr Simon Busuttil said yesterday that so far he has not been consulted by the Prime Minister on his nominee for President of the Republic.
A spokesman for the Opposition Leader confirmed that Dr Busuttil was not consulted by the Prime Minister over the issue and he is still waiting to be summoned by Dr Muscat.
Dr Busuttil also declined to comment on the rumour about Ms Coleiro Preca’s ‘nomination’ seeing that nothing has been made official yet. The spokesman said that once the Government formally announces her nomination Dr Busuttil will call a meeting of the PN Parliamentary Group to discuss the matter. The PN’s official reaction would be given after the meeting. The PN Leader has repeatedly called on the Prime Minister to nominate someone from the PN camp.
Previous
Eddie Fenech Adami’s autobiography launched
Next
Innovative seniors-only exercise park in North Sunshine