MCCV marks its 60 years of service to Maltese community 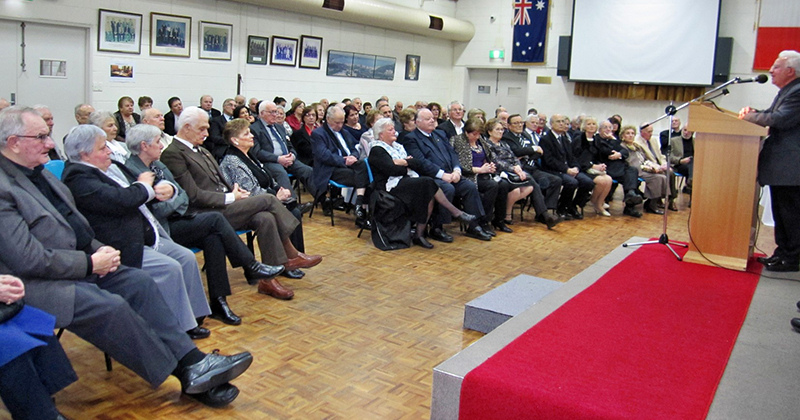 On 21 July 2018 the Maltese Community Council of Victoria celebrated the 60th anniversary since its formation in 1958 with a reception attended by a large gathering and held at the Maltese Community Centre in Parkville.
Among those present were the Consul General of Malta for Victoria, Ms Joanna Pisani; MSSP Provincial in Australia, Fr Ivano Burdian mssp; MCCV Chaplain, Fr Edwin Agius mssp; Immediate Past Chair of the Ethnic Communities Council of Victoria, Mr Eddie Micallef; members of the religious; present and past MCCV presidents and members of the MCCV Executive Committee; and present and past presidents and committee members of the Maltese MCCV-affiliated associations. MC for the evening was Dr Edwin Borg-Manché.

Following a prayer led by Fr Burdian, proceedings started with an acknowledgement of the traditional Aboriginal owners of the land, on which the centre is built, and the playing of the national anthems of Malta and Australia.
The evening’s proceedings were presented in two parts, the first being the celebration of the MCCV’s 60th Anniversary, and the second, the presentation of the Annual MCCV Community Awards for 2017.
In his address, MCCV President Victor Borg said that it was a great day for the Maltese community, the MCCV and the Missionary Society of St Paul.
“Who would have thought that an organisation that was formed in 1958 would still be going today and gaining much strength, as the MCCV continues to provide services to the people, who have needed help within the Maltese community,” he said.
“Today we all stand proud to recognise our achievements over the last sixty years. It has never been easy, but we always trusted in God to give us the strength, the capacity and the intelligence to go on to meet the aims of the founders of the MCCV,” Mr Borg said.

Mr Borg’s address included a slide presentation, showing some of the main highlights of the history of the organisation. He paid tribute to various living and deceased members and leaders of the Maltese community for their efforts and their significant contribution to the well-being of the community. The presentation included photos of the old Community Centre, its demolition, the construction of the new Centre and its formal opening in 1983, as well as photos of members of the community who participated in fundraising activities.
Mr Borg said that the Maltese community is held in high regard by the Australian federal and Victorian state governments and the MCCV maintains a close relationship with Malta’s High Commissioner in Canberra and the Consul General of Malta in Melbourne.
Mr Borg spoke about the close relationships that the MCCV maintains with other ethnic organisations, including the Ethnic Communities Council of Victoria (ECCV). Over the years, four members of the Maltese community were elected to lead that organisation as Chair of the ECCV, namely, the late Mr Tony Bonnici, Mr Victor Borg, Professor Maurice Cauchi, and Mr Eddie Micallef.