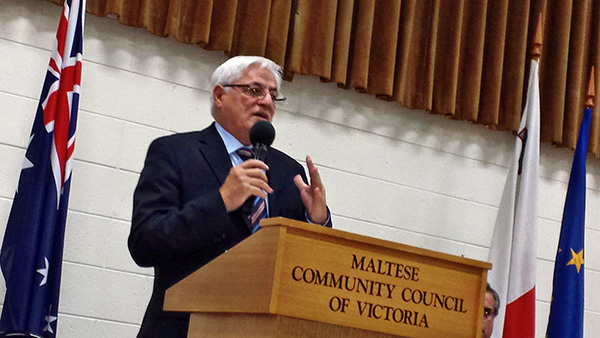 MCCV President Professor Maurice Cauchi said that the MCCV has always worked very smoothly with Mr Tabone as Malta’s High Commissioner in Canberra. Mr Tabone was always very keen to promote issues that affect the Maltese community, and has always been at the forefront in ensuring that Maltese in Australia are not short-changed. He gave as an example the recent issue with SBS Radio in which Mr Tabone was at the forefront, working with persons in Authority, without much fanfare, but with enormous zeal and played an important role in getting back two more Maltese language programs than originally allocated in the revised schedule. Prof Cauchi also thanked Mr Tabone for his role in persuading SBS TV to introducing a second news program in Maltese on Thursdays. In his reply, Mr Tabone thanked the MCCV for the farewell function and the members of the Maltese community for honouring him with their presence. “Every beginning has its own end,” said Mr Tabone. It was time for him to pass on his responsibilities to his successor. He said he was glad to have been lucky to have had the opportunity to spend almost seven years of life as an emigrant, with its times of satisfaction and others of sorrows that the decisions we take in life bring with them.

Mr Tabone said that he was satisfied that the reputation of the Maltese and the Gozitans in Australia is one of hardworking people, good people who care about their families. Their achievements were made possible thanks to the values that they brought with them and lived in their daily life, values that identify us as Maltese.

“You treasured everything that is Maltese, religion, culture and traditions. Somehow, we need to pass these down to our children, and they to their children. When you appreciate all this, that things did not happen by chance,” said Mr Tabone.

Mr Tabone said that the legislation that granted dual citizenship to our children was probably one of the best decisions that were taken for their benefit. Maltese citizenship brings with it the benefits of also automatically being citizens of the European Union.

Mr Tabone recalled that during his tenure a record number of visits to Australia were made by Maltese people in high authority. Some came more than once. In 2007 Prime Minister Dr Lawrence Gonzi came for a visit, while the Deputy Prime Minister Dr Tonio Borg visited twice. Two Maltese Presidents, Dr Eddie Fenech Adami and Dr George Abela, as well as then Leader of the Opposition, now Prime Minister, Dr Joseph Muscat, came to Australia. EU Commissioner, Dr Joe Borg, and a delegation of Maltese MPs led by Speaker Dr Michael Frendo, paid a visit. Malta’s Archbishop Mgr Paul Cremona and Gozo Bishop Mgr Mario Grech both paid a pastoral visit to the Maltese community in Australia.

Mr Tabone spoke about the visits of Australian authority figures visiting Malta. The Governor-General Quentin Bryce, who travelled to Malta with her husband, was the first Australian Governor-General to make an official visit to Malta. Foreign Affairs Ministers, Mr Stephen Smith and, more recently, Senator Bob Carr, also visited Malta. There was also a Federal Parliamentary delegation who visited. In the coming days, a Victorian State Parliamentary delegation will be visiting Malta.

Mr Tabone said that there were other milestones reached during his tenure, such as, the establishment of the Federation of Maltese Language Schools. We were able to overcome difficulties in ensuring that the Maltese language continued to be recognised as a Year 12 subject. We saw how the Federation continued to progress and it has now been granted the sum of 15,000 Euros to establish classes for Maltese taught as a foreign language with a test in English. Everyone played their part gladly and on a voluntary basis. Mr Tabone thanked Consul General Mr Charles Mifsud for playing his part in teaching Maltese himself.

Mr Tabone said that the message is one: ‘united we succeed’. Where others though otherwise, we saw that, as in the case of Maltese language programs on SBS Radio, we succeeded. We said what had to be said and went right up to Prime Minister Gillard, as that was what was required. We succeeded because we were united. Today we managed to get SBS to move from their position. Many ask how we did it. We had one objective; we had strong arguments and a strong Maltese community.

Mr Tabone also spoke about Maltese news programs on SBS TV. When he was appointed almost seven years ago, there was only one program and the problem was that often the program did not arrive from Malta on time or, if it did it, was four weeks late. More often than not it was not broadcast. Mr Tabone said that he was committed to resolving the problems and now we have a system whereby we have two programs transmitted weekly, one on Thursdays and another on Sundays, no repeats.

Mr Tabone said that we should not take anything for granted. Some days ago we heard the news that Australia closed its embassy in Hungary. He said that he reflected on this and raised concerns as it could have been the Australian High Commission in Malta. We have to make our voices heard when it happens to others, as there is no guarantee that, when the next wave comes, it might not happen to us. We need to be careful and vigilant about these kinds of events. Before closing, Mr Tabone thanked the Maltese associations and the religious in Australia, who with so much sacrifice and commitment look after our spiritual aspects, our sick, knowing t
hat they are also to pray for us. He also thanked the staff of the Maltese Consulate General in Melbourne, led so ably and so energetically by Consul General Mr Charles Mifsud.

Mr Tabone finally thanked the Maltese Community Council of Victoria for its work and commitment in ensuring that the Maltese in Victoria play their part to progress the achievement of the aspirations of the community.

On behalf of the MCCV and the Maltese community, MCCV Vice President Mr Victor Borg presented Mr Tabone with a memento for the occasion.

Mr George Saliba OAM was MC for the evening.