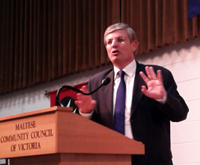 Last Tuesday evening  the Maltese Community Council of Victoria hosted a welcome reception in honour of the Deputy Prime Minister and Minister of Foreign Affairs, Dr Tonio Borg, at the Maltese Centre in Parkville. Dr Borg was in Australia to represent Malta at the Commonwealth Heads of Government Meeting (CHOGM) to be held in Perth later in the week deputising for the Prime Minister, Dr Lawrence Gonzi, who had to attend an urgent EU summit.

MCCV President, Professor Maurice Cauchi, welcomed Dr Borg to the Centre and stressed the importance of such visits as they strengthen our ties with Malta. Prior to the reception, Dr Borg addressed the Maltese Community leaders on a number of  issues of importance to the Maltese living abroad, in particular, the proposed Bill for the establishment of the Council for Maltese Living Abroad.

Prof Cauchi said that there are a number of issues that need to be discussed, such as, the ageing of the Maltese community and the quality of translations into the Maltese language of information disseminated by Australian government organisations, such as, one about diabetes that was recently circulated, which appeared to have been literally translated by some computerised translators.

Prof Cauchi said that when Gozo Bishop Mons Mario Grech, visiting the Centre last week, asked one of the students of the Maltese language at the Maltese Centre why she was studying the language, she replied that, as her mother was ageing, her mother was reverting to speaking only Maltese and so by studying Maltese, she would ensure that she can converse with her mother in Maltese. Prof Cauchi said that this is a real problem and it is important that we continue to work together to ensure that the needs of the Maltese in Victoria are met.

Prof Cauchi said that it is important that our younger generations do not forget about Maltese culture and history. As regards the language it is more difficult to get them interested in it and it would not be a surprise, if in ten or fifteen years time the learning of the Maltese language in Australia declines significantly, he said.

The MCCV established the Bishop Joseph Grech Memorial Fund with the objective of  assisting each year one or two young people of Maltese descent to visit Malta to experience the culture first hand, so that when they come back they help generate the same interest among other young Maltese Australians.

In his address Dr Borg apologised on behalf of the Prime Minister, Dr Lawrence Gonzi, who had planned to visit Melbourne but unfortunately could not make the trip due to being called to attend an urgent EU summit relating to the Euro debt crisis. Dr Gonzi had to cancel his entire trip to Australia, the highlight of which would have been representing Malta at CHOGM in Perth.

Dr Borg said that every time he came to Australia he tried to bring with him some good news. He recalled that on his first visit in 2007 he announced that dual nationality was being extended to the second and third generation of Maltese. This was such a success, said Dr Borg, that there is now a queue of applicants waiting for their applications to be processed. He promised that his department will do their best to process them as quickly as possible.

The Deputy Prime Minister said that all these reforms, including another one that he was about to announce, were being implemented to ensure that the interests of Maltese living overseas are not remembered only when a Minister visits them and then forgotten. He said that the aim is to try and keep them alive as much as possible. Today the concept has changed, and we longer speak of “migrants of Australia” but we refer to simply “Maltese”, some living in Malta and some in Melbourne or Sydney or London or Detroit or San Francisco or Toronto, said Dr Borg.

Dr Borg said that dual nationality initially applied to those who were born in Malta, then it was extended to the first generation born abroad and eventually to all those who can prove that they have at least one single drop of Maltese blood. They just need to prove a link to an ascendant who is Maltese in their family tree. This was another proof that we should not make any distinction between migrants and Maltese, as if migrants are not Maltese, said Dr Borg.

Dr Borg said that he always finds it emotional listening to the two anthems being sung and seeing Maltese living thousands of miles away from Malta, needing to catch three planes and taking about 24 hours to get to Malta, still showing such love towards the country that made us who we are – Maltese and proud to be Maltese.

Dr Borg spoke on what it means to be Maltese. It does not only mean that you were born in Malta and you mother and father are Maltese but also that you represent certain values and traits that make you Maltese, he said. “That is why history is important. Persons without knowing their history do not know where they are coming from, neither where they are, nor where they are going. It is history that gives us the compass for our direction. As Foreign Minister, he needs to know Malta’s history to be able to develop the foreign policy for the country,” he said.

Dr Borg then spoke about Malta’s contribution in providing humanitarian assistance during the recent crisis in Libya. He said that even the geographical position of Malta influences our foreign policy. This year Malta experienced the greatest crisis in the international sphere since its independence in the case of Libya, one of our neighbouring countries, which was going through a civil war. He said that revolutions had taken place in all three North African countries that have an embassy in Malta: Tunisia, Libya and Egypt. So it was inevitable that these events had an impact on Malta.

Dr Borg recalled a saying by Winston Churchill, who once said one cannot be neutral between the fireman and the fire, one has to side with the fireman. “And so in the case of Libya, our Prime Minister from the start said that the end of Gaddafi’s government is inevitable,” said Dr Borg. “Some criticised him for speaking out too early, but in the end that is how the situation developed. Today the new Libyan government is grateful to Malta without Malta having fired one single shot,” he said. Malta was not involved in any military operation but was a hub and centre of humanitarian assistance for one of our neighbouring countries.

Despite the criticism typically aimed at youth, Dr Borg said that it was youth who were at the forefront of all three revolutions in North A
frica and in Malta it was no different with youth also being at the forefront to assist and send supplies of medicines and food to Libya, making sure that assistance reached Libya, particularly in Misrata, which was the “Sarajevo” of Libya, bombarded incessantly.

Dr Borg said that before the fall of Tripoli, Malta was responsible for financing and executing the evacuation of 620 Libyan refugees from Tunisia and transporting them to Misrata and Benghazi. The Maltese government acted with prudence to gain the trust of the new Libyan government not only because morally it was the right thing to do, but also because ultimately it is in our interest to do so, he said. “It is important that you know what your government is doing to enhance the prestige of our country,” said Dr Borg.

“It is no wonder that [US Secretary of State] Hillary Clinton two weeks ago came to Malta. The Secretaries of State never visit Malta. The last visit of a Secretary of State was in 1989 and the purpose of the visit was the Bush-Gorbachev Summit that was held in Malta and not to meet with the Maltese government. It is also no wonder that the British Foreign Secretary William Hague also visited Malta to thank Malta for being once again ‘the nurse of the Mediterranean’. We could do this because we have a sense of history. If this applies to the history of a country, it applies more forcefully to the history of migration,” said Dr Borg.

Turning to the issue of the establishment of the Council for Maltese Living Abroad, Dr Borg said that he would like the link between Maltese communities and Malta to be not just the subject of conventions, studies and speeches. He wanted to establish by law a permanent organ to be the link between the Maltese communities and the Government of Malta. He said that it was with pleasure that he was announcing that, at the same time as he was delivering his address, the draft Bill for the establishment of the Council was being published in the Malta Government Gazette. As it will be enshrined in law, the Council’s establishment will, therefore, not be left to the whims of the Minister of Foreign Affairs but will be required by law, he said.

Under the proposed Bill a Director will be appointed within the Foreign Ministry who will be exclusively responsible for Council matters, so that when dealing with the whole civil service the interests of all Maltese living abroad will be duly taken into account in every bill and administrative measure.

Dr Borg said that the proposed Council will also be required to maintain set up and maintain a register of Maltese organisations overseas as well as a register of prominent Maltese nationals living abroad who have distinguished themselves in their respective profession, vocation or work outside Malta. It will be up to the Council to decide who should be registered.

Dr Borg presented Prof Cauchi with a memento for the occasion as well as several books for the MCCV library about the Maltese national poet, Dun Karm Psaila, whose 50th anniversary of his death is being commemorated this year. In turn, Prof Cauchi presented Dr Borg with a copy of his book Maltese Achievers in Australia, which he suggested would be a starting point for the register.

The Malta High Commissioner in Australia, H.E. Mr Francis Tabone, spoke briefly about the incentive scheme that the High Commission organises for students of the Maltese language to encourage more students to take up the language. He said that each of the six students who sat for the VCE exam the day before will receive the sum of $150. Dr Borg presented the cheques to the students: Nicola Vella, Charles Buhagiar, Robert Lia, Kimberley Bonnici, Marlene Muscat and Melanie Bajada.

Also present at the reception was the Consul General for Malta in Victoria, Mr Charles Mifsud.