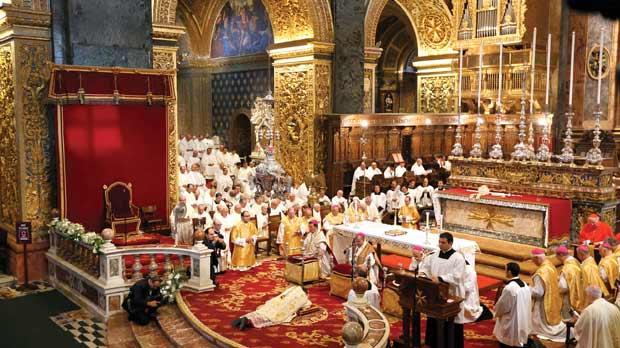 Prior to being nominated Auxiliary Bishop, Mgr Scicluna served as Promoter of Justice at the Congregation for the Doctrine of Faith, which was led by then Cardinal Joseph Ratzinger before he became Pope. He had a frontline role in uncovering some of the most difficult abuse scandals that came to light in recent years.

Mgr Scicluna’s day started as he left his Lija home with his parents for the parish church of The Transfiguration, where he stopped to say a prayer and was joined by Mgr Cremona.

Mgr Scicluna and Mgr Cremona, followed by the former’s parents, drove through Naxxar Road, Birkirkara Valley and Santa Venera, passing through St Joseph High Road and stopping at the MUSEUM chapel in Blata l-Bajda, where Mgr Scicluna and Mgr Cremona said a prayer at the shrine of St George Preca and in front of the Holy Sacrament. The two bishops then left chapel and the cortege headed to Valletta.

The ordination ceremony began with the reading out of an official proclamation by the Pope followed by Mgr Cremona’s homily in which he thanked the Pope for sending Mgr Scicluna “with his talents and experience – to help me and the Church in Malta on its way towards holiness”.

The two-and-a-half-hour ceremony was peppered with metaphors depicting Mgr Scicluna as a shepherd, who, alongside the Archbishop – who has experienced health problems in recent months – will lead the Church in Malta.

Referring to St John’s gospel, Mgr Cremona spoke of the value of the sheep at the centre of the parable and in his homily called on Mgr Scicluna to cherish the responsibility of being entrusted to guide the sheep.

“Our dignity as bishops derives from the fact that we are at the service of the dignity of the people entrusted to our care. Today, our Lord is entrusting you with what is most precious to him – the human being,” he said.

“It is a great honour and a sign of God’s great trust that He first chooses the Church and then some of its members, and entrusts them with the care of human beings. This is what he is entrusting you with today.  The episcopate is not a point of arrival but a way of perfection for those chosen.”

In a message to the new bishop, Mgr Cremona said “today, our Lord is entrusting you with what is most precious to him, that is, the human being. Our dignity stems from this. It is a great honour and a sign of God’s great trust that God first chooses the Church and then some of its members and entrusts them with the care of human persons. This is what he is entrusting you with today.”

Mgr Cremona said that “The fullness of the ministerial priesthood which you will be receiving in your Episcopal Ordination is the mission through which the Bishop helps the faithful to live their calling as Christians. This means that the Bishop’s is not a personal dignity: it is given to him for others. It is a great dignity and a great responsibility which the Church entrusts primarily to Bishops in a specific place and entrusts them mainly with all the means it has available for the sanctification of Christians: namely the sacraments and the Word of God.”

The homily was followed by the formal interrogation by Mgr Cremona, before the new bishop lay prostrate on a red carpet in front of the altar as a sign of his submissiveness before God.

Each of the bishops present laid their hands on Mgr Scicluna’s head and Mgr Cremona, as lead consecrator, anointed Mgr Scicluna with the oil that officially made him bishop.

The ceremony is steeped in tradition and as Mgr Scicluna knelt before the Archbishop, he was anointed with oil and presented with the Book of Gospels to go and preach the Word of God with patience and sound teaching.

The Archbishop also slipped a ring on Mgr Scicluna’s right hand as a seal of fidelity to preserve, unblemished, the bride of god – the holy Church. Finally, he was presented with the mitre, signifying his resolve to pursue holiness, and the pastoral staff or crosier symbolising a shepherd’s crook to watch over the flock.

This was the time for a smile to reappear on the cherub-like face of the new Auxiliary Bishop, as he kissed and embraced the bishops, receiving an especially big bear hug from Cardinal Prospero Grech, who was also ordained at the Vatican this year.

Cardinal Grech was in Malta, together with Cardinal Cormac Murphy O’Connor, the former Archbishop of Westminster, on the invitation of Mgr Scicluna. Many more were invited to attend but Mgr Scicluna’s ordination coincided with a consistory at the Vatican where the Pope appointed six new cardinals.

In a brief message at the end of the ceremony, Mgr Scicluna promised to give his life for the people. He thanked Mgr Cremona for his words which he said he will etch in his heart, Cardinal Prospero Grech, the other foreign and Maltese bishops, his parents, his family and the rest of the congregation.

In his first words at the end of his Episcopal Ordination as Auxiliary Bishop, the diminutive bishop cracked a joke about his height. “I have a short message for you – don’t expect big things from me,” he said, as a ripple of applause burst the sombre mood when he gave a short speech at the end of the ceremony. The 53-year-old bishop assured Archbishop Paul Cremona he would carve the words he spoke during the homily in the scripture of his life for the good of all.

At the end of the ceremony, Mgr Scicluna switched between Maltese, English and Italian to thank all the bishops who flew to Malta to be by his side, reserving the final appreciation for the best gift from God – that his parents were still alive to witness this moment.

“I promise to give my life to you all,” he said.