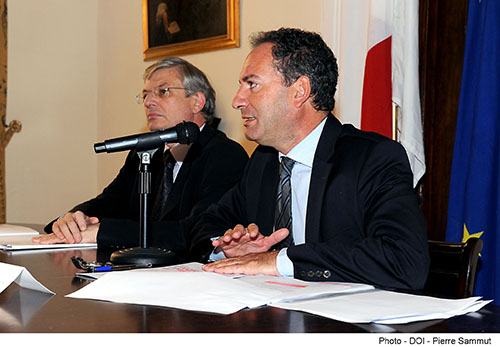 At the opening of the first meeting of the advisory Council for Maltese Living Abroad that took place in Malta over two days on Tuesday and Wednesday 18th and 19th September, Dr Mario de Marco, the Minister of Tourism, Culture and the Environment, outlined the proposal for the establishment of the Maltese Cultural Institute.

Dr de Marco emphasized the fact that many Maltese are now resident in foreign countries, resulting in an urgent need for the promotion of Maltese culture in these countries. “We recognise the potential of Maltese communities abroad to contribute positively to Maltese culture and we do our utmost to facilitate and encourage their active participation,” he said.

The National Cultural Policy launched last year includes a chapter dealing with International Cultural Cooperation. It emphasizes the potential for Malta to act as a creative hub in the centre of the Mediterranean. It is an aim to place Malta as an “attractive and contemporary creative centre in the Mediterranean region”. The Minister said that the Maltese Cultural Institute “would be strategically placed as an important element for our cultural and creative international presence.”

Minister de Marco emphasized the importance of Malta as an “international platform where creative workers, local and international, can create and develop services that have a regional, European and global significance.”

Among the list of ‘present shortcomings’, the minister emphasized that: “there is room for the strengthening of ties with the Maltese Diaspora”. On the other hand, in discussing opportunities, the Minister highlighted the role of “individuals of high quality and enterprises that operate on international level and as such we can maximise on the fact that we already have Maltese creative workers on an international level.”

One of the aims of the Maltese Cultural Institute is ‘the development of a Scheme of Cultural Ambassadors that publicly acknowledge international achievements of Maltese artists and cultural workers’.

It is expected that this Institute will be established through an agreement between the Ministry of Foreign Affairs and the Ministry of Tourism, Culture and the Environment.  The success of this institute depends on the cooperation of these two ministries as well as the participation of other players in the field, including public and private institutions, voluntary organisations and the Local Councils.

The  Minister then summarised the aims of the Institute, namely of:

Minister de Marco concluded by saying that “This is about strengthening the Maltese cultural, economic and political ties with other countries through an active dialogue and cultural cooperation. Cultural diplomacy shortens distances between countries, serving as a powerful tool in bringing nations closer, in bringing people closer together, to better understand and empathise with the other. Art and culture’s language is universal and therefore it can reach where any other language fails.”

Previous
Celebration of the Feast of Maria Bambina in Melbourne
Next
MEUSAC Seminar on 'Multiculturalism: Myth or Reality?'