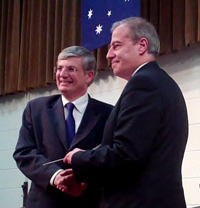 On Tuesday 25 October 2011 during his address to the Maltese community at the Welcome Reception hosted by the Maltese Community Council of Victoria, the Deputy Prime Minister and Minister of Foreign Affairs, Dr Tonio Borg, announced the appointment of Dr Edwin Borg-Manché as the new Honorary Consul for Malta in the State of Victoria.

Dr Borg paid a special tribute to the outgoing Honorary Consul, Mr Victor Borg, who had served in that capacity for almost three decades. While acknowledging that Mr Borg was not one to be going into retirement and that he would still continue to serve and advise the community, Dr Borg thanked Mr Victor Borg for his services as Honorary Consul.

The Deputy Prime Minister said that, before he became Minister, he had heard of Victor Borg but he did not meet him until he first visited Australia in 2007. He said that he knew how hard Victor Borg has worked for the Maltese community. Since his arrival in Australia as a young boy on one of the P&O migrant ships, Victor always showed an interest in the Maltese community in Melbourne and he is rightly acknowledged as one of the foremost leaders of the community, said Dr Borg. Dr Borg said that “of all the Maltese communities in Australia, the best organised community is that in the State of Victoria and Victor Borg deserved some credit for that.” He said that in expressing this opinion he was also reflecting the opinion of many Maltese both in Victoria and in Malta.

The Deputy Prime Minister said that, as Mr Victor Borg had expressed his wish to be replaced by someone younger, the Maltese Government decided to appoint Dr Edwin Borg-Manché as the new Honorary Consul. Dr Borg said that he has known Dr Borg-Manché well for a long time, having been in the same law course together at the University of Malta for five years. He congratulated Dr Borg-Manché on his appointment and said it was very pleasing to be appointing someone whom he knew so well. The Deputy Prime Minister said that the Australian Government had approved his appointment on 17 October and this was followed by the issuing of the warrant by the President of Malta, H.E. Dr George Abela, the following day. He then presented Dr Borg-Manché with the Warrant of Honorary Consul for Malta in Victoria signed by the President of Malta and countersigned by the Deputy Prime Minister himself as well as with the Exequatur issued by the Government of Australia.

Profile of the new Honorary Consul

Dr. Edwin Borg-Manché was born in Malta and grew up in Gżira, where he resided until 1982 when he migrated to Australia. He started his primary education at St Joseph Primary School in Sliema and later at the State Primary School in Gżira. For his secondary education he attended the Archbishop’s Seminary in Floriana and the Upper Secondary School in Valletta.

In 1974 he commenced reading law at the University of Malta. In 1978 he was awarded the Diploma of Notary Public and a year later the degree of Doctor of Laws (LL.D). In January 1980 he was admitted to practice as an Advocate in the Maltese law courts.

In 1980 Dr Borg-Manché joined the American subsidiary manufacturing company, Blue Bell (Malta) Limited, as Personnel Officer. Two years later he left for Australia settling in Melbourne. He pursued further legal studies at Monash University and the following year he was admitted to practice as Barrister and Solicitor of the Supreme Court of Victoria and the High Court of Australia.

Between 1983 and 1986 Dr Borg-Manché practiced law in the firm of Victor Borg & Co, specialising in Family Law, before joining the Legal Aid Commission of Victoria (now known as Victioria Legal Aid) in 1986. At the LACV he specialised in social security and veterans’ entitlements law and was later appointed Secretary to the Board and eventually promoted to Deputy Director of the largest Division. While working full-time, in 1988 Dr Borg-Manché pursued business studies at Deakin University and two years later was awarded the Graduate Diploma of Business, majoring in Accounting.

In 1995 Dr Borg-Manché joined SMS Mangement & Technology, a leading Australian IT and management consulting firm in Melbourne as a consultant. For the past 16 years he has provided project management and consulting services in business and information technology to government departments and multinational companies in various industry sectors, including mining and resources, telecommunications as well as banking and finance.

Dr Borg-Manché first became involved in the Maltese community in Melbourne in late 1999, when he was seconded to the Executive Committee of the Maltese Community Council of Victoria (MCCV) to fill a vacancy of Vice-President. He was re-elected to this position for another two years in 2001.

Dr Borg-Manché felt that the time had come for the MCCV to have an internet presence and he set himself the task of designing and developing its first website. The MCCV launched the website in November 1999 as an important channel of communication with the Maltese community in Victoria. He continued to maintain the website for three years.

Dr Borg-Manché resumed his involvement in the Maltese community in early 2010, when he accepted a secondment to the Executive Committee of the MCCV in 2010 to fill the vacancy of Public Relations Officer.

In March 2010 Dr Borg-Manché attended as an MCCV delegate the Convention of Maltese Living Abroad held in Valletta, Malta. At the Convention he was a keynote speakerand delivered a paper that he co-authored with the then MCCV President, Mr Victor Borg, on The Critical Role of Government in Maltese Diaspora Engagement.

In June 2010 he took over as Editor of the bi-monthly MCCV Newsletter. The revamped newsletter, which was re-name
d MCCV News, was welcomed by the Maltese community in Australia as well as by other Maltese living overseas.

In October 2010 Dr Borg-Manché was re-elected unopposed to the position of Public Relations Officer for a two-year term. He soon saw the need to upgrade the MCCV website to bring it up to today’s standards he embarked on a challenging project to re-design and re-develop a new website from scratch. The new interactive and highly informative MCCV website at www.mccv.org.au was launched in April 2011. Dr Borg-Manché maintains the website on an ongoing basis.

Having participated at the Convention and realising the critical importance for any diaspora organisation to have a web presence, Dr Borg-Manché offered his voluntary services to design and develop the website of the Federation of Maltese Living Abroad at www.malteseabroad.org which was launched in June 2011. As website administrator, he maintains this website on an ongoing basis.