NEWS  Transport Malta has published the new bus route timetables drawn up following consultation with local councils and feedback from the public. Detailed maps of some of the new routes have been uploaded on the Transport Malta website.
Meanwhile, Transport Minister Joe Mizzi said that Malta Public Transport Services had estimated that between January 2 and 16, some 1,070,000 passengers made use of its services.
Answering a parliamentary question by MP Ċensu Galea (PN), he said it was impossible to arrive at the actual number because the Unscheduled Bus Service vehicles that were helping out with public transport were not equipped with ticketing machines or automatic passenger counter units.
It was estimated that the UBS vehicles had carried some 75,000 of this number. 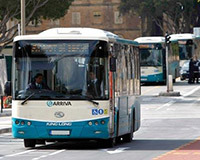 In early January the government of Malta and Transport Malta (TM) reached an agreement with Arriva for the bus services operations to pass on to a government company. The agreement, sources said, was reached over a nominal €1 fee for the transfer of shares.
A team from TM has been seconded to this company to ensure that the public bus service continues smoothly and that the transitional period in between Arriva and the new operator will be the least inconvenient to passengers, the government said.
During this period of delicate negotiations, especially in the light of risks that the company could be liquidated – which would have led to a suspension of the service and employees losing their job – the government wanted to ensure that the agreement is convenient for everyone.
During the transitional period – no changes to routes will be affected but the name ‘Arriva’ will be removed from buses.
Another immediate change will be to the pricing structure: Transport Malta chairman, Mr James Piscopo, said that the tariffs, by means of which foreigners are charged at higher rates than Maltese people, is fundamentally wrong and will be changed immediately.
Ticket prices will then be among the points to be negotiated with the new company as per the contract of service. The number of buses also needs to increase in the future.
The issue of bus fare discrimination had been raised with the Malta government by the EU Commission last year and the EU had even considered issuing proceedings against Malta. (See also European Commission ‘assessing’ Malta’s reply on bus fare discrimination).

In a statement issued simultaneously, Arriva said that after careful consideration, agreement has been reached to transfer the whole of the shareholding of Arriva Malta to the Government of Malta, taking effect from 2 January.
“We have considered every alternative together with Government representatives and have entered into long and detailed negotiations to try and find a satisfactory outcome for all parties. We believe that this decision will be in the best interests of all stakeholders and ensure continuation of the provision of bus services on Malta and Gozo for the travelling public,” Arriva said.
Services continue to operate as normal and, as part of the agreement, Arriva will provide operational management advice to the Government of Malta over the coming weeks to ensure a smooth transition for customers and employees, the company said.
[Sources: www.timesofmalta.com; www.independent.com.mt]