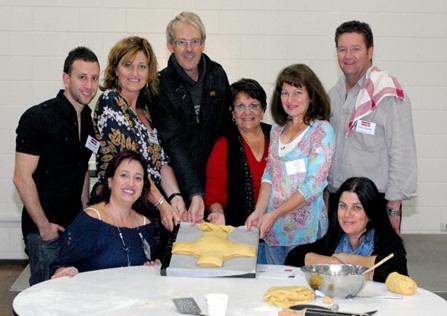 Last Saturday a fusion of ages and cultures had a ball at the Maltese Centre in Parkville learning how to make figolli – the traditional Maltese Easter sweet. Originally a virtual event organized by Gourmet Worrier (www.gourmetworrier.com) last year, World Figolli Day this year became a physical event in Melbourne with about 70 participants, ages varying from 6 months to 79 years old, being shown by Olga Ellul, an active member of the Maltese Community in Melbourne, how to make figolli.

Mr Charles Mifsud, Consul General for Malta in Victoria made a surprise visit at the event. Mr Mifsud commended NISĠA and the event and said the most satisfying thing about it all was the gathering of grandparents, passing on the traditional Maltese culinary culture to their children and grandchildren.

This was the first official event co-hosted by new “group on the block”, NISĠA.  An incorporated, not for profit group, NISĠA aims to act as a platform to pass the Maltese identity to Australian youth via various cultural events and music festivals, thus strengthening a sense of Australian-Maltese identity amongst current and ensuing generations.

“In Maltese, nisġa refers to a weave, and by weaving together the different colors, textures and threads that tell our stories, we hope to foster greater strength of relationship with Malta and her people.”

Nisġa are currently working towards the next event, a Maltese Cook Off being held in September in Melbourne.