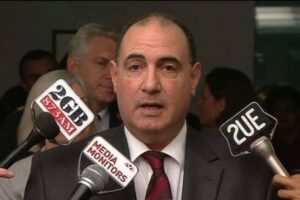 NEWS   Welfare groups have accused the Abbott federal government of dumping Australia’s sense of a fair go after targeting payments to unemployed young people, families, pensioners and people with disabilities in its first budget delivered last Tuesday. According to St Vincent de Paul Society chief executive Dr John Falzon, ‘There are measures in this budget that rip the guts out of what remains of a fair and egalitarian Australia’.
Dr Falzon says this budget is deeply offensive to the people for whom every day is already a battle. “The government would like us to believe that this Budget is tough but fair but for the people who struggle to make ends meet it can only be described as being tough but cruel,” he said.
“There are measures in this Budget that rip the guts out of what remains of a fair and egalitarian Australia.These measures will not help people into jobs but they will force people into deeper poverty. You don’t help young people or older people or people with a disability or single mums into jobs by making them poor. You don’t build people up by putting them down. And as even the OECD acknowledges, you don’t build a strong economy by increasing the level of inequality. You don’t create a strong country on the backs of the already poor,” said Dr Falzon.
“There’s nothing human or humane about humiliating people because they are outside the labour market or on its low-paid fringes. There’s nothing smart about making it unaffordable for people to see a doctor. We are not in the throes of a fiscal crisis but if we embark on this treacherous path of US-style austerity we will be staring down the barrel of a social crisis,” said Dr Falzon.
St Vincent de Paul Society National President, Mr Anthony Thornton, said: “Governments must do what markets cannot. We are saddened to see the government walking away from its responsibility to its people.
“It has shied away from the challenge to build a broader and more sustainable revenue base so that no one misses out on the essentials of life such as a place to live, a place to work and a place to learn. This Budget hurts the people that the government should be helping,” said Mr Thornton.
Nation-dividing budget – ACOSS
In a statement titled Budget divides the nation, young and old, rich and poor published on on its website on budget night, the Australian Council of Social Service (ACOSS) said it was deeply concerned that those in our nation who carry the greatest burden from spending cuts in the Budget are those who can least afford it.