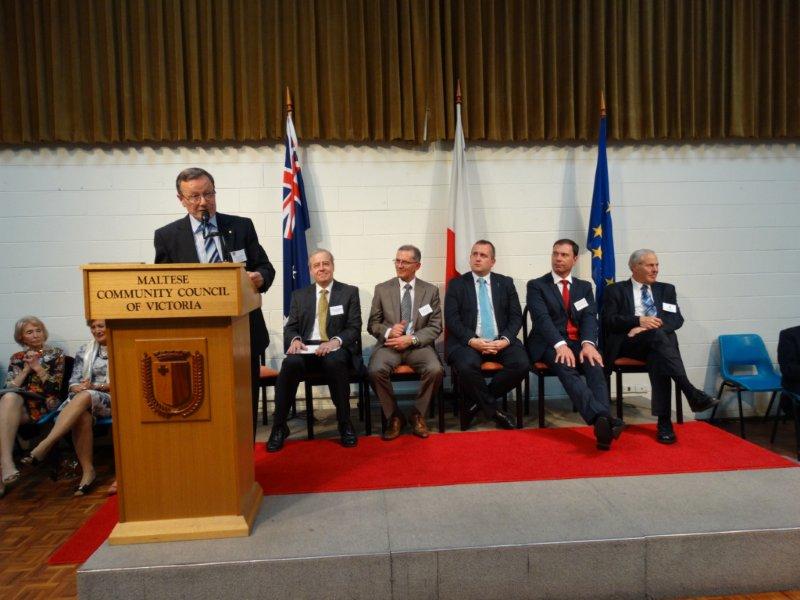 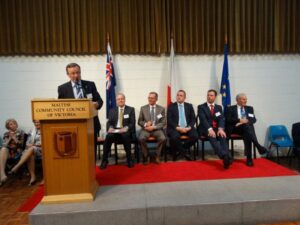 NEWS    The second part of proceedings at the reception held on 21 September at the Maltese Centre in Parkville to commemorate the 50th Anniversary of Malta’s Independence consisted of the presentation of the MCCV Community Awards 2014.
In 2012 the MCCV established its Annual Community Awards to publicly recognise, and show its appreciation for, the valuable contribution of Maltese people to the enrichment of the Maltese community in Victoria, whether by their contribution to scholarship, education, welfare services, arts and generally to the well being of our Maltese community.
This year the MCCV honoured twelve members of our community who have made a significant contribution to various aspects of our community life. The Awards were presented to the successful nominees, namely: 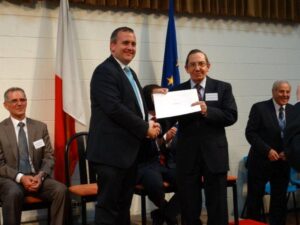 PROF JOSEPH CAMILLERI MA, PhD was born in Alexandria, Egypt. His father was from Hamrun, Malta and his mother from Izmir, Turkey. His family came to Australia when he was very young. He studied at Melbourne University and obtained his PhD from London University. He has been a visiting Fellow to many international institution including London School of Economics, Princeton University and Cornell University. Until recently he was Professor of International Relations at La Trobe University and Director of the Centre for Dialogue which has done a great deal to bring together individuals and communities of widely varying views working for global peace. He has published extensively with more than 15 books to his name, on topics varying from International Relations to Globalization to Politics in the Pacific region. 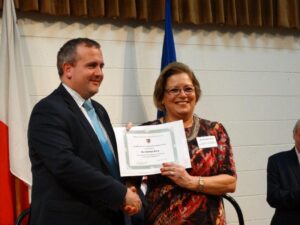 MS EDWIDGE BORG B.Bus (Admin) holds a degree of Bachelor of Business Administration specialising in Accounting and Business Management from RMIT University. She is an experienced administrator and has worked in various senior management positions at Media Entertainment & Arts Alliance, SBS and currently at Austin Health. She has been involved with the Maltese community for several years.  For many years she has been particularly active in organising Maltese languages course at the Maltese Community Centre, and has been involved with activities, including particularly functions to engage children.  She has served on the MCCV Executive Committee for several years, first as Vice President, and then for a term as President between 2002 and 2004. 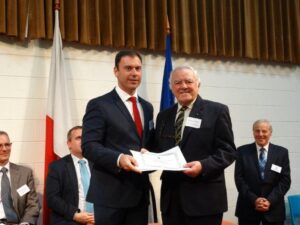 MR ALBERT AGIUS Born in Birzebbugia, Albert migrated to Australia in 1978.  He studied journalism at the University of Malta before coming to Australia. Albert has had a long career which started as a journalist contributing articles to Maltese papers, with his popular Australian Newsletter, and later with SBS radio, highlighting various facets of Maltese life in Australia. Albert has published several books, including Maltese Settlement in Austrlia, Qwiel u Idjomi Maltin, and It-Tezawru. He has also gave several talks to the Maltese Historical Association on topics of Maltese history. Albert is also a member of the Order of St John of Jerusalem. 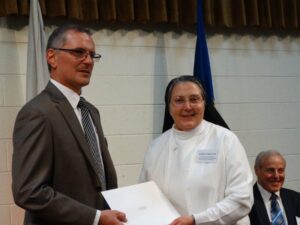 SR DORIS FALZON OP. Born in Birkirkara, Malta Sister Doris Falzon has been in Melbourne since 1983, serving the Maltese community as a member of the Dominican Sisters of Malta. Sr Doris is a fully qualified nurse. She was involved in establishing Rosary Home, then a 36-bed aged care home in Keilor Downs.  From 1994 she was very much involved in planning and supervising the new extension to Rosary Home, which now accommodates 50 residents. As Administrator of Rosary Home she has the responsibility of ensuring the success of this facility, which, by all accounts, is considered as one of the best aged care homes in Melbourne. 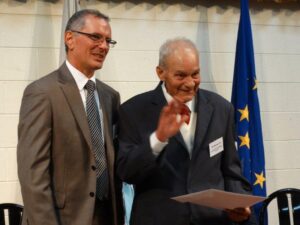 MR ROMEO CINI was born in Tripoli (Libya) and since his arrival in Australia in 1961 he has been very much involved with Maltese from Tripoli. Romeo  was the founder President of the Tripoli Social Club. He started the monthly Newsletter Il Corriere Tripolino di Melbourne which was circulated to Tripolitani around the world. Romeo has become well-known recently for his publication La Nostra Storia (translated by Dr George Boffa as ‘Our Story’), a unique document detailing the experiences of Maltese from Tripoli who were evacuated to Italy during the Second World War. 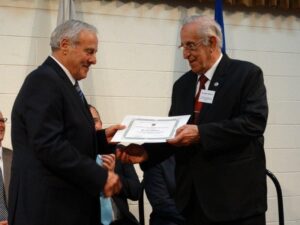 MR LEWIS STAFRACE was one of the earliest migrants from Malta, arriving in Australian 1949. Since that time he has been heavily involved with the Maltese community, firstly in helping the newly-arrived Maltese, and then with Maltese settled particularly in the Sunshine and Keilor areas. Lewis has been involved as President and community leader of various associations.  He was the former President of the Green Gully Soccer Club, Founder and President of the Green Gully Senior Citizens Social Club, member of the Maltese Community Council of Victoria, and President of the St Albans Good Friday Association. Lewis is also a musician and was the founder and President of the St Albans Melita Band . He is also Justice of the Peace, and has received several awards, including Victoria’s Award for Excellence in Multicultural Affairs, and The Manoel de Vilhena Award. 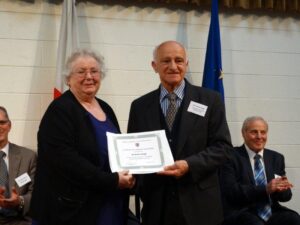 MR JIMMY DINGLI has been working within the Maltese Community in the South-Eastern Suburbs since 1967, helping with the settlement process of newly-arrived Maltese. Jimmy was instrumental in setting up the St Paul’s South-Eastern Suburbs Association, of which he is currently its President. He is also very active in church functions in the region, being Councillor in the Parish Council . As Eucharistic Minister in the Church, he regularly visits older people in their homes, to administer communion and give other support. 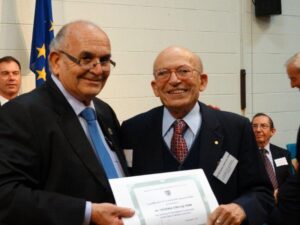 MR NICHOLAS CHIRCOP OAM Born in Alexandria, Egypt where he was already quite active within the Maltese community there, Nicholas Chircop arrived in Australia in 1955, and was soon appointed as Commissioner for taking affidavits. Nick held the post of President of the Melita Social Club, Secretary of the Maltese Community Council of Victoria, and President of the Maltese Ex-Services Association of Victoria. Nick has received several awards, including the Manoel de Vilhena Award, a Certificate from the Premier of Victoria in connection with the Premier’s Senior Citizens of the Year Award, and the Order of Australia Medal for services to the community. 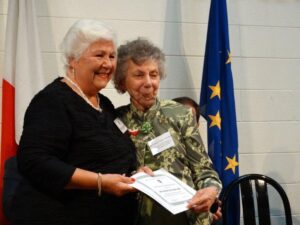 MRS CARMEN TESTA OAM, MQR, Dip Ed. Born in Birkirkara, Malta Carmen Testa arrived in Australia when she was 17 years of age with her mother and six brothers. Carmen has worked as NAATI qualified Maltese interpreter and translator, and later as teacher at St Paul’s Primary School. She has been very involved with the Maltese community, setting up the ‘The Western Region Maltese Women’s Group’ in 1985, and has been involved in several other associations.  She has also been involved in organising a visitation program for home-bound or sick people at home or in nursing homes.  She has received several awards for her work, including the Medal of the Order of Australia, the ‘Medalja għall-Qadi tar-Repubblika’ and the Premier’s Special Commendation Award. 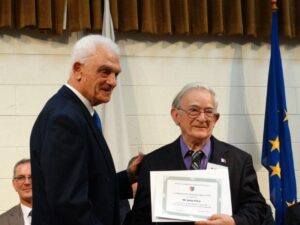 MR JOHN PACE has been involved with the Maltese community for several years. He has been responsible for organising the Men’s Group which aims to offer friendship and social contact for men who have found themselves isolated at home and from their community. The group meets at the Maltese Centre every week, enabling its members to make new friends and support each other. John volunteers a lot of his time working at the Centre looking after the canteen, and doing jobs about the building and garden.
In Absentia
DR CLEMENTE ZAMMIT MQR Born in Birkirkara, Malta Dr Clemente Zammit studied at the Usher Institute of the University of Leeds and at the University of Edinburgh. He held many positions in the Malta Civil Service, before serving as Consul General of Malta for Victoria for 17 years from March 1989 to January 2006. During this time he worked hard to represent the Maltese in Victoria on various bodies and in particular with Victoria University. Clemente’s involvement with Maltese associations was appreciated and he was made honorary member of several Maltese associations in Victoria. Clemente  was a regular contributor to Maltese radio programs. He is also a writer and a poet, and more recently has published novels as
e-books, a first for a Maltese in Australia. His work has been recognised with the award of the ‘Midalja ghall-Qadi tar-Repubblika”, and the award of Doctor of the University (honoris causa) from Victoria University.
MR JOSEPH BORG BE (Mechanical)
Born in Rabat, Malta, Joe came to Australia with his family in 1954. He is a Chartered Professional Engineer and holds a degree of Bachelor of Engineering (Mechanical) from the University of Melbourne. Joe has had a long-standing interest in Maltese culture and history. He was the moving force behind the setting up of the Maltese Historical Association, of which he was the first Secretary, and subsequently (and currently) President of this Association. Joe has also been involved with the Maltese Community Council of Victoria since 1990, including his term as President between 1992 and 1994).  His contribution to the general culture can be attested to by his engineering works for monuments which dot various prominent places in Melbourne. He is also a member of the Order of St John of Jerusalem. 