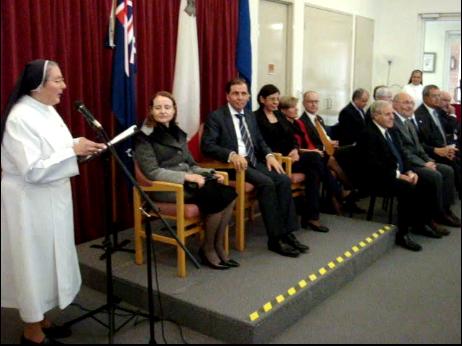 To mark the 25th anniversary of the opening of Rosary Home for the Aged run by a religious community of four Maltese Dominican nuns in East Keilor, a western suburb of Melbourne, Malta President Dr George Abela invited Sr Doris Falzon, the administrator of the facility, to submit a project proposal to the Malta Community Chest Fund, which he personally heads, during a visit to the Home on 24th March 2011

The President’s visit to Rosary Home was his last official engagement at the end of his week long official state visit to Australia, where he travelled to Sydney, Brisbane and Canberra before coming to Melbourne. Accompanying him on his visit to the Home were his wife, Mrs Margaret Abela, Minister Dolores Cristina and his delegation, the High Commissioner of Malta in Australia, H.E. Mr Francis Tabone, and the Consul-General for Victoria, Mr Charles Mifsud.

Sr Doris Falzon welcomed the President and the other distinguished guests and described the Home as “a home away from home” for its residents. Rosary Home has 50 residents from 12 different nationalities and cultures. 17 are from Malta, 15 were born in Australia, and others originated from Italy, Spain, Chile, India, Turkey, Scotland, Egypt, Croatia, England and the Netherlands. The youngest resident is 63 years old and the eldest forty years older at 103. Sr Falzon said that at the Home they watched the news from Malta on SBS TV every week and they are often inspired by the President’s commitment to support worthy causes and projects of charitable institutions. She thanked the President and his delegation for making the time to visit the facility in his busy schedule.

On behalf of the Board of Management of Rosary Home, its Chairman, Mr Victor Borg, welcomed the President and his delegation to the aged care facility. “We are grateful for your visit, as it means that you will go back to Malta knowing what great services the Maltese ageing community is being provided with, the dedication of the nuns and all the achievements that we manage from year to year”, said Mr Borg. He also praised the hard working nuns and staff for the services that provide to the residents in a professional, loving and caring manner. Dr Abela thanked Sr Doris Falzon and the Board of Management for the opportunity to visit Rosary Home. He said that his visit would be remembered as he offered to assist the Home with a grant from the Malta Community Chest Fund for a particular project to be nominated by the Home’s administrator to mark the 25th anniversary of the Home’s opening.

Dr Abela explained that during the year the President of Malta presides over the Malta Community Chest Fund, which ensures that the needy in the community get the assistance they need not only in Malta, but also at institutions outside Malta, which look after the Maltese and others. An event is held in Malta every year on Boxing Day, known as ‘L-Istrina’, when people phone in during a televised phone-in marathon program, and to pledge and donate money for charity.

Addressing Sr Falzon, Dr Abela said that he invited her “to indicate to us a particular project which you would like to carry out in this Home, something of substance, so we can provide the funds. This would be to celebrate the 25th anniversary since the opening of Rosary Home.”