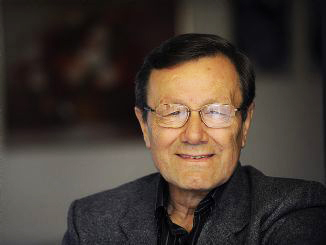 A prominent member of the Maltese community in Melbourne, Mr George Saliba, was today awarded the Medal of the Order of Australia (OAM) for service to the Maltese community. Mr Saliba was among several recipients of Australian honours included in the traditional announcement that is made by the Governor General on the occasion of the Queen’s Birthday. The Maltese Community Council of Victoria congratulates Mr Saliba on his well-deserved award.

For the past 40 years, Mr Saliba has worked very hard on activities aimed at developing the Maltese community in every respect with some outstanding results to his credit. George is still very active within the Maltese community and his dedication to make a better world for members of the community, especially among the elderly citizens, is as strong as ever.

Most people want to be able to leave a legacy for those who come after them. Some begin to think in these terms only later in life. George Saliba was encouraged to think about such issues at a younger age. In 1955 while still in his late teens living in Malta, he was involved in setting up the Malta Amateur Football Association (MAFA) which today is the second biggest sporting body in Malta.

In 1958 Mr Saliba carried this enthusiasm with him to Australia where he was determined to make a difference in a way that would benefit his new community. In Australia, he started work with the Victorian Railways and later with Westinghouse Brake & Signal Australia Pty Ltd. He furthered his studies at the Australian Institute of Management and was promoted by the company to the position of Works Superintendent, Rectifier Division. In 1983 Mr Saliba went to work for the Public Transport Commission as a Senior Electoral Training Officer where he stayed until his retirement in 1995.

In 1972 Mr Saliba was one of the founding members of the Newport Maltese Association(NMA) and was the first President of the Association, a position he held for 22 years. During this time, he worked tirelessly to make the NMA what it is today, one of the pillars on which the Maltese community of Victoria is built.

In 2003 Mr Saliba was also appointed Coordinator of the Association’s Seniors Group. The Seniors Group, 240 in number, meet every Wednesday to socialize and join in various competitions and activities. Although primarily the Association was established to provide welfare and social activities for the Maltese Community and their friends, Mr Saliba successfully predicted that as part of this process they would exchange ideas and help each other to adapt to the Australian way of life.

In 1978 Mr Saliba was also elected Senior Vice President of the Maltese Community Council of Victoria (MCCV), a position he had held for 16 years unitl he retired. While serving as Vice President, George also held the positions of Management Committee Chairman and Maltese Cultural Festival Coordinator. In 2002, members of the MCCV executive requested Mr Saliba to consider standing for the Vice Presidency once again, a position he held until last year. Through Mr Saliba’s leadership and sheer determination, the Newport Maltese Association raised in excess of $ 300,000 for the building fund, an achievement unmatched till today. Mr Saliba is justifiably proud of his significant contribution over the years to the Maltese Community Council, which from its Centre provides welfare services of a very high standard to the Maltese community. Programs available to all those in need include the Community Aged Care Packages, Home Visitation Scheme, Adult Day Care and Community Support Services.

In 1980, Mr Saliba was instrumental in helping to organize the first ever Maltese Song Festival. He continued to present the 1981 and 1982 Festivals at the Melbourne State Theatre and the 1983 Festival at the Melbourne Town Hall. These festivals were met with great success and many new Maltese-Australian talents were discovered. As part of the festival, Mr Saliba organized various activities such as “Folkloric Dancing” from various ethnic youth groups, “Ravioli Eating Competition” and Traditional folk Music and Singing. This Multi-Cultural festival was a huge success and continued for a number of years.

As part of the “Melbourne International Festival 1997” George worked alongside Professor Tony Sagona of the Melbourne University to organize an exhibition titled Islands in the Sun, Cultural Contact in the Maltese Archipelago. The exhibition, which ran for seven weeks, displayed a large range of Arts & crafts by Maltese artists to the general public.

Mr Saliba has played a pivotal role in the organization of the annual “Maltese Cultural Festival”. In 1977 he coordinated the opening of the first Festival at the City Square in Swanston Street, Melbourne, to promote Maltese culture among other nationalities. The Festival is held with a dual purpose of introducing and reinforcing culture to younger members of our community as well as providing an opportunity for the community at large to witness and participate in Maltese cultural activities. It has been undoubtedly one of the biggest activities on the Maltese social calendar. Mr Saliba has been involved with the Festival since its inception and for many years as its Coordinator.

Since becoming President of the Newport Maltese Association, Mr Saliba has been in continuous service to the community both as a committee member at Newport and as an Executive Member of the MCCV. Much that has been achieved at both levels has been a result of his tireless efforts and his strong commitment to advance the interest of the community. He has provided great leadership and inspired many committee members to excel in their efforts.

In recognition of his outstanding contribution to Community Service, in 1999 at the Victoria University, St Albans Campus, George Saliba was awarded the “Manuel De Vilhena Award” under the patronage of Dr
Eddie Fenech Adami, then Prime Minister of Malta.

On the occasion of the 150 years anniversary, the Victorian Government presented Mr Saliba with a “Certificate of Appreciation” in recognition and appreciation for voluntary work to the community.

In November 2007, Mr Saliba was presented with an award for “Excellence in Multicultural Affairs” by the Governor of Victoria Prof. David De Kretser, A.O. at Government House.

Mr Saliba has been married to Lena for 53 years and they have two children and two grandchildren.