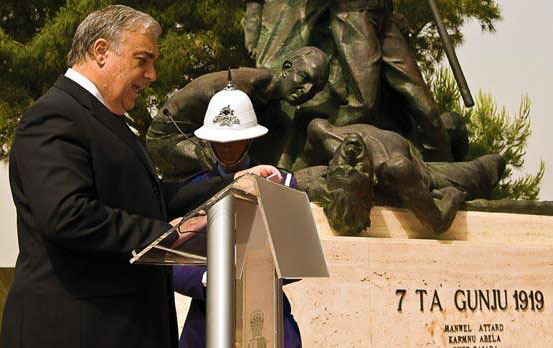 Addressing a gathering, which included MPs from both sides of politics led by the Prime Minister Dr Lawrence Gonzi and the Opposition Leader Dr Joseph Muscat during the Sette Giugno commemoration held in Hastings Gardens, Valletta to mark the bread riot that broke out on 7 June 1919,  the Speaker of Malta’s House of Representatives Dr Michael Frendo conveyed a clear message that Maltese parliamentary democracy needs “more and more strategic thinking and less and less short-term political tactics.”

Dr Frendo said that he still felt that he could “declare with conviction that our parliamentary democracy is alive and healthy, however, as is always our duty, we must continue working to make it more robust.” He added that parliament has “a particular vitality, as demonstrated by the experience of the recent referendum and the preceding and subsequent discussion.” He warned, however, that care must be taken to ensure that Malta’s “parliamentary democracy does not remain stuck in its present state, and does not lag behind when compared to other parliamentary democracies in our main region, namely Europe.”

Dr Frendo said that by having a strong national parliament, Malta will also be stronger within the European Union, now that the Maltese National Parliament is an integral part of the decision-making architecture of the European Union. He appealed to the political parties to work together to reactivate the “abandoned” parliamentary committee that was vital for the country’s democracy.

“It is truly lamentable that the select committee on the strengthening of democracy is inoperative, having been abandoned because it could not operate without everyone’s political will,” said Dr Frendo.

“The standing committee on House business is another forum where changes can be effected but it is certainly not the best forum when compared to the hopes and expectations the other committee had given rise to throughout the country,” he said.

Dr Frendo said there was “an urgent need” for the situation to change because “it is depriving us of the use of a tool” that was appropriate for reforms in favour of parliamentary democracy.

The role of the committee, which was established in 2008, was to discuss sensitive issues such as political party financing, the electoral system, the strengthening of Parliamentary resources and laws ensuring MPs avoided conflicts of interest.

The committee became inactive in March 2010 when the opposition walked out in protest following claims by government MPs on how some Labour MPs, particularly Justyne Caruana, had voted during a debate on the extension of the power station. The opposition had also protested over a ruling by the Speaker on the issue. Labour MP Carmelo Abela had also resigned from the Deputy Speaker position.