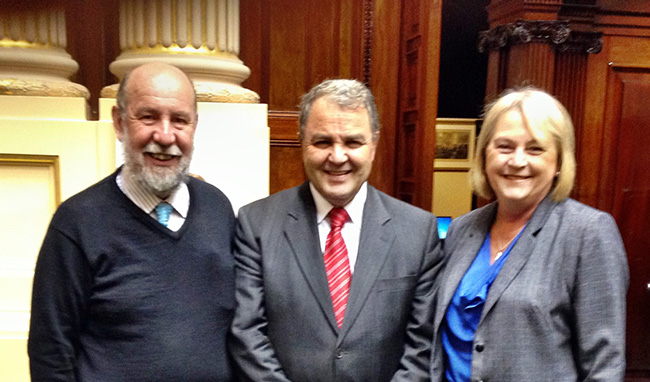 The Speaker of the Maltese Parliament, the Hon Dr Anġlu Farrugia, paid a two-day visit to Melbourne, while on a week-long visit to Australia, after attending a conference of the Commonwealth Parliamentary Association in Johannesburg, South Africa. The highlights of his brief visit were a meeting with members of the Malta Friendship Parliamentary Group of the Victorial Parliament, a visit to Rosary Home aged care facilities run by the Dominican Sisters of Malta and a welcome reception held in his honour by the Maltese Community Council of Victoria.
Dr Farrugia arrived in Melbourne on Tuesday 10 September. In the morning he paid a visit to Rosary Home in Keilor Downs accompanied by the Hon Consul of Malta in Victoria, Dr Edwin Borg-Manché, MCCV Vice President Mr Victor Borg and Dr Victor Shields of the Missionary Society of St Paul, who is currently visiting from Malta. Sr Doris Falzon of the Dominican Sisters of Malta and Administrator of the Home and Mr Paul Borg, the Financial Controller of the Home, greeted Dr Farrugia and showed him around the facilities. Dr Farrugia was very impressed with the Home and had the opportunity to talk with some of the residents.
In the afternoon Dr Farrugia visited the General Consulate of Malta in the Melbourne CBD, where he was met by the staff members, Ms Miriam Cassar and Ms Pauline Theuma, and signed the visitors’ book.
Dr Farrugia then visited St Patrick’s Cathedral in East Melbourne where he was able to view the monument of St George Preca located in a prominent place in the cathedral grounds.
In the evening, the MCCV held a Welcome Reception for Dr Farrugia, where he met members of Maltese associations and community. Click here for a full report of this event.
On the second day of his visit, Dr Farrugia visited the Shrine of Remembrance on St Kilda Road and the Shelter of Peace located on the eastern lawn next to the Shrine and dedicated to the Maltese who fought and died in the two world wars.
Dr Farrugia then proceeded to the SBS Radio studios where he was interviewed by Senior Broadcaster, Ms Marlene Galea, for the Maltese Program.
In the afternoon, Dr Farrugia was greeted at Parliament House in Spring Street by Deputy Speaker of the Legislative Assembly the Hon Christine Fyffe, the Hon Don Nardella MP, Labour Member for Melton and the Hon Andrew Elsbury MP, Liberal Member for Western Metropolitan. Dr Farrugia was shown around the two parliamentary chambers, the Legislative Assembly and the Legislative Council. During the meeting Dr Farrugia discussed various issues, including the progress report of the Friendship Group between the Maltese Parliament and the Parliament of Victoria. Also discussed were the role of the Maltese living abroaf and parliamentary democracy and the possibility of exchange regarding legislation that relates to the Anti-Corruption Select Committee.
Later in the afternoon Dr Farrugia visited the Immigration Museum in Flinders Street, before flying back to Sydney in the evening. Dr Anġlu Farrugia LL.D. M.Jur. (magna cum laude), has assumed office after being elected Speaker of the House of Representatives, Parliament of Malta, during the first sitting of the Twelfth Legislature on 6 April 2013.
Dr Farrugia first entered Parliament in 1996, and was re-elected in 1998, 2003 and 2008. Between 1998 and 2008, Dr Farrugia was the Shadow Minister for Justice. In June 2008, he was elected as the Labour Party’s Deputy Leader responsible for Parliamentary Affairs, and served for five years as the Opposition’s Shadow Minister on Employment and Workers’ Rights.
Dr Farrugia was Chairman of the Standing Committee of the House for the Consideration of Bills between 1996 and 1998, and an ad hoc member between 1998 and 2013 on the same committee. Between 1996 and 2008, he was also a member of the Privileges Committee of the House of Representatives.
Dr Farrugia headed the Maltese Parliament’s delegation to the Parliamentary Assembly of the Organisation for Security and Co-operation in Europe (OSCE) between 1996 and 1998, and served as a member of the delegation since then till 2008. He has travelled abroad on a number of EU and OSCE missions as an international observer during the holding of various elections, including the ones in Georgia (1999), the Presidential Election in Palestine (2004), the US Presidential Election in 2004, the Montenegrin Independence Referendum (2006) and the Presidential and Parliamentary Elections in Zambia (2006).
Dr Farrugia also served as a member of the OSCE Parliamentary Assembly’s Standing Committee on Human Rights.
Prior to entering politics, Dr Farrugia moved up the ranks within the Malta Police Force from 1977 to 1996, leaving the Force in the rank of Police Superintendent. During this period, he graduated as a lawyer from the University of Malta.
Dr Farrugia was born on the 29th December 1955 in Mosta, and is married to Carmen née Zammit. They have a daughter, Caroline, who is a practising lawyer.