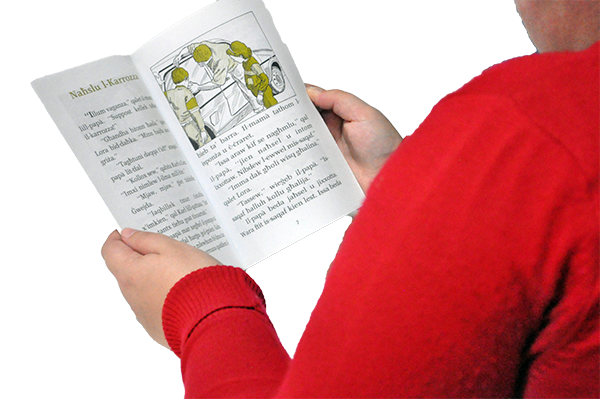 At the Maltese Centre in Parkville on the afternoon of Sunday 25 August the focus was on Maltese words, rhymes and stories for a group of children aged between 4-10 years. A GAM initiative, the Stories, Rhymes & Fun event was held to coincide with Australia’s annual Children’s Book Week (17th- 23rd August).

The idea behind the event was to expose the children to Maltese authors and literature, as well as give them a taste of the Maltese language and alphabet. Activities involved live interactions, rhyming, storytelling, songs and games. A feature of the afternoon was GAM enlisting the help of well known children’s authors Clare Azzopardi and Deborah Abela. Both spoke and read to the children via Skype. Clare, who streamed in live from Malta, read from her popular book Ġużeppina, about a naughty little girl, who tries to learn the alphabet using the letters that her grandfather gave her for her birthday, only to end up stamping these letters all over her arms, cheeks, legs!

Deborah, an Australian born of Maltese bloodlines, currently based in Sydney, read from one her Max Remy Superspy book series – Max Remy Superspy, Mission in Malta, about 11 year old Max who is part of an elite intelligence agency called Spyforce that finds herself in Malta for one of her missions!

GAM hopes the Stories, Rhymes & Fun event will grow to become an annual occurrence and wishes to thank all of those who participated.