The Maltese of Woolloomooloo Wharf

Dr Barry York uses Maltese oral history accounts to discover what life was like in Woolloomooloo’s wharf community a century ago.
A few years ago, I was approached by the producers of the popular SBS TV series, Who Do You Think You Are?, to appear in an episode about one of Australia’s leading entertainers, Adam Hills. I was surprised to learn that Hills had a Maltese great grandfather who migrated to Woolloomooloo, Sydney, in 1912. My oral history work over many years had focused on Maltese migrants and someone from the production company asked if I knew anything about the Maltese community in Woolloomooloo back then. Immediately, my mind turned to a collection of oral histories I had recorded in the 1980s on cassettes that were carefully stored in shoeboxes in a cupboard at home.
I had written books on the larger question of Maltese migration to Australia and had an understanding of the context for the Woolloomooloo community. I also knew of print sources that would provide factual information. But what oral history could provide went to a different, deeper, level entirely. In my cassette collection were interviews with two women who migrated from Malta to Woolloomooloo with their mothers in 1913 and 1914. Both had grown up there, as part of the wharf community. I recorded Christina Couch (nee Farrugia) and Jean Barrett (nee Rizzo) in Sydney in 1984 when they were aged in their 70s. As I located the cassettes and dusted them off, it suddenly struck me: the two interviews represent voices of migration a hundred years ago!
The subjective accounts of daily life in Woolloomooloo, in the rectangle of streets pushing 500 metres back from the bay, is unique and priceless. Had the recordings not been made, the individual memories would have been lost; though I wish to point out that my friend and fellow historian, Mark Caruana, had interviewed both women before me, and it was through him that my own opportunity arose.
Woolloomooloo today is highly sought after real estate, with a largely gentrified population. The Finger Wharf is a heritage site, with up-market apartments developed above it and posh restaurants around it. In 1912, it was a tough working class community with many migrants. Back then, the wharves were booming, employing hundreds of labourers, sometimes running three shifts per day. The houses were gas lit but comfortable and, in some ways, similar to those in Malta: double-storeyed, bedrooms upstairs, dining area downstairs, no front yard, steps leading to the pavement. As in Malta, this allowed individuals to sit out the front after work and chat with passers-by.

Jean Rizzo and Christina Farrugia both hailed from dock towns in Malta’s Grand Harbour. Jean’s father, Joseph, was a dockyard worker while Christina’s was a deep-sea diver. It is likely that Christina’s father had worked on the construction of Malta’s Breakwater—a major project lasting from 1903 to 1909—and his skills were in demand in Sydney when the huge wharf was being built at Woolloomooloo from 1911 to 1915. Christina recalls him later working on the pylons of the Sydney Harbour Bridge when it was being built. The ‘pull’ of Australia was its reputation as ‘l-art tal-futur’ (the Land of the Future), where hard work was rewarded with good wages.
Malta was a British colony and migration within the Empire was seen as offering a better future than migration to traditional destinations along the north African coast. Australia at this time was developing rapidly, expanding its trade with Europe. There was abundant work in quarries, factories, road and rail construction, and on the wharves. The Maltese who settled in Woolloomooloo were pioneers of urban migration.
There are patterns in history, but within the patterns are multitudes of individual stories. The fathers of both women made the voyage to Australia on their own, with a view to testing the conditions and bringing out their families later on. John Farrugia made the move in 1911 and did well as a diver on the wharf project. When he sent for his family two years later, he had ready for them a rented house in Plunkett Street, a few minutes’ walk from the wharves.

Jean’s father, Joseph, obtained a ‘working passage’ on a boat in 1912 and initially laboured on road construction around Mount Lyell, Tasmania, before moving to Woolloomooloo, where he worked on the wharves and arranged passage for his wife and two-year-old Jean in 1914. A few hundred Maltese worked at Mount Lyell when he was there but many gradually headed north, in part because the wet, cold conditions on Tasmania’s north-west coast were so different to the Mediterranean climate. When Jean and her mother disembarked at Sydney, Joe took them straight to the house he was renting in Nicholson Street, in the heart of the wharf community. Prior to that, he had boarded at the Farrugias’ place with a dozen or so other Maltese wharf workers.
The Farrugias’ house attracted many new arrivals. As Christina recalled:

Any new people who came to Australia, friends would bring them to our place, and they were always made welcome … They’d bring their mandolins and we’d have real good old sing-song … and they’d talk about home and different ones would ask my mother to write a letter home because some of them couldn’t read or write.

The Maltese language was spoken and Maltese cuisine prepared. In the absence of refrigeration, rabbits and chooks were slaughtered fresh. One can imagine the streets of this quarter filled with the scent of baked macaroni and ‘stuffat tal-fenek’ (rabbit stew) and, in the evening, the sound of a mandolin or guitar being played by a Maltese wharf labourer, sitting on his doorstep. There would also have been a strong scent of horses, as there were ‘hundreds of them’, with some carriages drawn by eight horses. And of course, on a warm breezy night, there was the saline scent from the bay.
Sometimes migrants suffer homesickness but, according to Jean, her parents were very satisfied at Woolloomooloo. Her mother, Katarina, had been a seamstress, sewing clothes for the Royal Navy in Malta. Her mother told her that life was very hard in Malta. Neither parent had any desire to return, and they never did. The family felt ‘comfortable’, especially with extra income earned when Katarina started a sewing business from home.
The community was a tight-knit one and Jean and Christina recalled at least four other Maltese families among their neighbours—the Carabotts, Cassars, Vassallos and Zahras. “We went to [St Mary’s Cathedral] school with their children and we all grew up together’. There were also many single Maltese men who had to wait until after the War to bring out their families. Jean Barrett recalled:

(The Maltese) always used to stick together. You know what I mean? Go on picnics together. Down in Woolloomooloo there’d be no radio or television then so after ten, the men would go and sit out on a step or in the gutter and just talk there, and the women, when they had finished their tea business, they’d go out too but mostly you’d find all the men out there talking … it was always in Maltese! 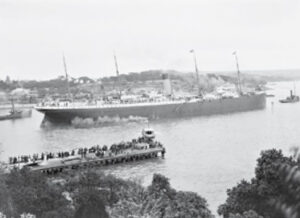 There appears to have been a high level of class solidarity with ‘foreigners’ permitted to join the Wharf Labourers Union. The community was ethnically diverse: Maltese wharfies lived alongside the Australian-born, English migrants and Italian fishermen. Neither woman felt they were ever discriminated against while growing up in Woolloomooloo. On the contrary, both speak highly of their Australian neighbours. According to Jean:

we had no trouble with them at all, the Australians. My mother mixed up well with them. My father did too, with the men on the wharf. And I did at work too. But I will say there were some people who used to complain.

Both women married Maltese men in Sydney. In 1927, Jean married a Maltese by the name of Harry Barrett from her hometown, Senglea, and Christina married Charles Cauchi from Sliema in 1930.
Christina’s husband changed his surname from Cauchi (pronounced ‘Cow-key’) to Couch in order to avoid discrimination in employment. Her brothers in Sydney also changed their surnames: from Farrugia to Ferguson. The practice of changing Maltese surnames to English or Scottish ones interests me because in 1947 my Maltese father, Loreto, changed his surname from Meilak (pronounced ‘May-lak’) to York for similar assimilationist reasons.
The interviews capture some of the Maltese culture of that era. As a small island with a few dozen common surnames, nicknames developed as a way of differentiating people with the same names. Christina recalled her father’s nickname was ‘Ganni l-Bughaddas’, which means ‘Johnny the deep sea diver’. Thus her dad could be distinguished from any other John Farrugia by reference to his occupation.
Both women sound very Australian and Christina self-identified as Australian. Jean regarded herself as Maltese but added ‘I’ve been here a long time’. She still spoke Maltese at the local club where she liked to play bingo with other Maltese women.
The Library has digitised the two interviews and they are scheduled to go online. When that happens, people anywhere in the world with access to the internet will be able to experience this particular aspect of history, of century-old migration to Australia, through listening to the individual voices of those who lived it.

DR BARRY YORK is a historian at the Museum of Australian Democracy at Old Parliament House. He began recording oral history interviews for the Library in 1988 and was a Harold White Fellow in 1997. His email address is Barry.York@moadoph.gov.au.
This article is reproduced with the author’s kind permission. It was first published in The National Library of Australia Magazine – March 2016.
Previous
Australian author brings Maltese migrant story to life
Next
Three generations of Maltese in Australia: A picture through surveys of the population