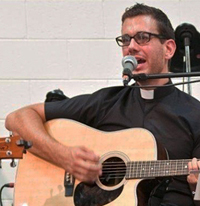 The Bishop Joseph Grech Memorial Fund Committee held a well-attended Fundraising Concert Dinner last Sunday at the Maltese Centre in Parkville to raise funds for the Fund. Members of the Maltese community in Victoria packed the hall for an evening of entertainment provided by special guest, the internationally acclaimed singer and songwriter of Christian music, Fr Robert Galea, supported by Manuel Casha’s band of musicians known as Girgenti.

In attendance as guest of the Committee was Monsignor Francis Marriott, who was appointed Administrator of the Diocese of Sandhurst following the passing away of Bishop Grech. Also present were the President the Maltese Community Council of Victoria, Professor Maurice Cauchi, and other members of the Executive Committee, members of the Bishop Joe Grech Fund committee, as well as members of the family of the late Bishop Joseph Grech. MC for the evening was Mr George Saliba.

The band Girgenti opened the musical programme playing a number of popular tunes. The band consists of the band leader, Manuel Casha on the guitar, Laurie Armato in the mandolin, Alfie Xuereb on the guitar and keyboard, Joe Gauci on the guitar, Joe Camilleri on drums and percussion and Joe Cutajar on the guitar.

After the main course, the President of the Bishop Joseph Grech Memorial Fund Committee, Professor Maurice Cauchi, welcomed those present to the Maltese Centre and spoke about the social welfare work that the MCCV provides from there. He also explained the purpose for which the Memorial Fund was established, namely to encourage our younger generations to become more interested in maintaining the Maltese culture. Prof. Cauchi said that the best way to get our young to maintain their interest is by assisting them to travel and spend time in Malta. It is important that the seed of Maltese culture is planted in our young early in life to give it the best change to flourish.

Prof. Cauchi said that the Fund Committee has been working for the past six months to establish the Fund and raise the money so that one or two annual scholarships can be awarded to young people of Maltese background to travel to Maltese to experience Maltese life and culture first-hand. About $30,000 have been raised so far. The first scholarship is expected to be awarded in June 2012 and will cover part of the travel cost to Malta. The precise amount will depend on the interest income received on the capital amount in the Fund. He invited those present to encourage their children and grandchildren to show an interest in Maltese history and culture and eventually apply for the scholarship.

Prof. Cauchi thanked everyone who attended the concert-dinner and singled out for a special thanks Mrs Mary Cordina who co-ordinated and organised the attendance of many of those present. He also thanked all those who worked hard to make the evening such a success.

Introducing Fr. Rob, as he is known, MC Mr George Saliba mentioned Fr Rob’s CD albums which included Closer (2006), What a Day (2008), Divine Mercy Chaplet (July 2010) and the latest Reach Out (2011). Fr Rob was selected to sing in the international version of the World Youth Day song Receive the Power. Fr Rob believes that music is an important instrument to help God’s people understand the need for intimacy with God. Whilst greatly appreciating his gift of music, Fr. Rob recognizes that before everything he is a follower of Christ, a priest and only then, a musician.

Fr Rob then took centre stage with his guitar, singing a selection from his repertoire, accompanied on the guitar by Jason Giuliani. Fr Rob said that it was honour and a privilege to be present at the concert-dinner to give honour to the late Bishop Joe Grech, who was his Bishop and very much like a father to him. He said that he grabs every opportunity that comes his way to honour the memory of Bishop Joe.

In addition to singing several songs from his albums, Fr Rob engaged the audience in two sing-alongs. The first was the song that he wrote together with Bishop Joe at Portarlington one summer, based on a favourite saying of Bishop Joe, God does not make rubbish, which he eventually recorded with him and is one of Fr Rob’s most downloaded songs on the internet. The second was the Maltese popular sing-along Lanċa Gejja u l-Oħra Sejra.

The current Vicar General of the Archdiocese of Melbourne, Most Rev Les Tomlinson D.D. has been appointed to Sandhurst by Pope Benedict XVI to succeed the late Bishop Joseph Grech. Bishop Tomlinson will be installed as the Seventh Bishop of Sandhurst on Thursday 1 March 2012 at 12pm by the Metropolitan of the Victorian Province, Archbishop Denis Hart.

The MCCV launched the Bishop Joe Grech Memorial Fund in March 2011 in memory of the late Bishop who passed away suddenly just over a year ago. Bishop Grech left an important legacy, which many would like to celebrate and commemorate. He was known throughout his life for his exceptional personal qualities, which included leadership, achievement, and above all an enduring love for Malta.

The aim of the fund is to raise enough money to provide an annual scholarship, which would include a trip to Malta, for young people of Maltese background who best embody the qualities and

values shown by Bishop Grech throughout his life.