ANZAC centenary to be commemorated in Malta 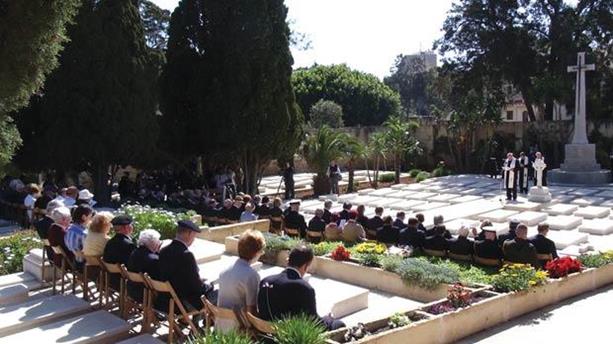 UPDATED 23 Apr 2015
A Commemorative Service to mark the 100th Anniversary of the start of the Gallipoli Campaign will be held at the Pieta Military Cemetery in Malta on Saturday 25 April 2015 at 10.00 am. The Service is open to the public. 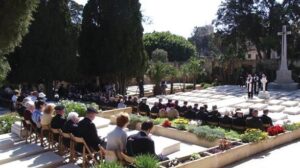 ANZAC Day has been commemorated in Malta since 1916. Since 1979 the service has been held at the Pieta Military Cemetery as it contains the highest number of ANZAC war graves in Malta.
The Cemetery is located in Triq Id-Duluri (entrance at the junction of Triq Id-Duluri and Triq Santa Monika) Pieta.
Malta played a significant role in and during the Gallipoli Campaign with many Australians and New Zealand casualties being evacuated to Malta for medical treatment. From the spring of 1915, hospitals and convalescent camps were established on the islands of Malta and Gozo, to deal with the many thousands of sick and wounded from the Gallipoli and Salonika campaigns. Despite the courageous efforts of the doctors and medical staff, some of the casualties could not be saved and they were buried on Malta. Of those buried on Malta there were 202 Australian and 72 New Zealanders.
The Commonwealth war burials in Malta are unlike those found anywhere else. Many joint and collective burials were made as graves had to be cut into the rock underlying the island’s shallow earth crust. These graves are usually marked by flat tablets that could take several inscriptions and, for the sake of uniformity; the same type of marker was used for single graves.
To mark the 100th Anniversary of ANZAC a number of organisations and associations will be setting up displays or conducting events leading up to and around 25 April.
Concert 25 April 2015 – The Malta Philharmonic Orchestra
The Malta Philharmonic Orchestra under the direction of Brian Schembri is scheduled to perform on the evening of 25 April and will include in the program Peter Sculthorpe’s piece “Small Town” which is a homage to the effect of war on the Australian communities.
Concert 28 and 30 March 2015 – The Malta Philharmonic Orchestra
The Malta Philharmonic Orchestra under the direction of Christopher will also include in its program for 28 and 30 March the “Elegy In Memorium to Rupert Brooke” written by the Australian composer Frederick Septimus Kelly for his friend who died in the early part of WW1, Kelly served at Gallipoli, came to Malta in May 1915 before going to the battle in France where he too died.
For more information about the Malta Philharmonic Orchestra and ticketing for the Concerts go to their web page at www.maltaorchestra.com

The full program of activities is as follows:
13-17 April: Visit to Malta of the STS Young Endeavour at the Grand Harbour.
15 April: Re-Enactment of the Awarding of The George Cross to Malta (www.mta.com.mt).
17 April 2015: ANZAC Exhibition of Archives at the National Library of Malta at 6.30 p.m. (Exhibition is open to the public) (For more information: www.facebook.com/pages/National-Library-of-Malta).
25 April: Official Ceremony Pieta’ Military Cemetery at 1000hrs. (Service is open to the public) ANZAC Concert by the Malta Philharmonic Orchestra under the direction of Mro Brian Schembri which will include in the program Peter Sculthrope’s piece Small Town which is a homage to the effect of war on the Australian communities (ANZAC).
28 April: ANZAC Concert by the Malta Philharmonic Orchestra under the direction of Mro Christopher Muscat – pieces to the Gallipoli dead (www.maltaorchestra.com).
30 April: ANZAC Concert by the Malta Philharmonic Orchestra under the direction of Mro Christopher Muscat – pieces to the Gallipoli dead (www.maltaorchestra.com).
11-14 May: HMS ANZAC visits Malta. Second to visit to Malta of the STS Young Endeavour at the Grand Harbour.
All Days: ANZAC Station Hospital 0930hrs-1600hrs (Admission: Adults €4.50/Seniors 60+ & Students €2.90/Family €10.50/Children Under 12 €2.00).
All Days: ANZAC Stained Glass at St Andrew’s Scots Church (www.saintandrewsmalta.com).
All Days: Australia Botanic Garden at Argotti Gardens will display Australian plants and trees next to Malta ANZAC Memorial (Entrance is free).
Mon-Fri: Permanent Display at St Edward’s College on when this college was at the Cottonera Hospital that served as an ANZAC Hospital, (www.stedwards.ed.mt.)
——————
Cemetries in Malta
All of the Cemeteries listed below contain graves from both world wars:
The Malta (Capuccini) Naval Cemetery
Imtarfa Military Cemetery
Pembroke Military Cemetery
Pieta Military Cemetery
Addolorata Cemetery
Marsa Turkish Cemetery
Clicking on the name of the cemetery will link you to the Commonwealth War Graves web page that will provide you with more information about the cemetery and location.
Hospitals and Convalescent Camps
To cater for the over 135,000 sick and wounded from the Gallipoli and Salonika campaigns there were numerous hospitals and convalescent Camps throughout Malta and Gozo. The Australian and New Zealanders soldiers were treated in various hospitals and Convalescent Camps. Listed below are but a few of the many Hospitals and Convalescent Camp that were on Malta to treat the sick and wounded.
Station Hospital is now known as the Mediterranean Conference Centre located at Mediterranean St, Il-Belt Valletta. Tours are conducted through this Centre by the Malta Experience.
Lazzaretto Hospital on Manoel Island can still be viewed from any of the tour boats conducting the harbour cruises from Sliema.
Bavière Hospital was situated in the Auberge de Bavière. The Auberge de Bavière has an ancient and honourable history, having been the headquarters of the Anglo-Bavarian Knights of St. John located at San Bastjan, Valletta. It now houses the main offices of the GPD, including the Director General’s Office, the Finance & Administration Directorate, The Estate Management Directorate, the Land Directorate and the Joint Office Directorate.
St Elmo Hospital was previously a government school that was converted in to a hospital. St. Elmo specialised as a surgical hospital. The hospital was located at Fort St Elmo at the north end of the Grand Harbour. It was well ventilated and overlooked the breakwater.
Fort Chambray Hospital Gozo served as an excellent Convalescent Depot (camp) during the First World War, relieving the crowded camps on Malta.
Mtarfa Hospital was commissioned in 1912. It was used during World War I to hold many of injured Australian and New Zealand troops from the Gallipoli landings. It was expanded enormously during the Second World War. In the 1950s it was renamed the David Bruce Royal Naval Hospital, after the doctor who discovered the root cause of Malta fever or Brucellosis. It has since been converted to a state secondary school, named after Sir Temi Zammit, part of St Nicholas College.
Cottonera Hospital is now St Edward’s College providing an excellent all round education, including an IB 6th Form, to its students and also very proud of its heritage as the Cottonera Hospital. Visit the beautiful grounds of St Edward’s College and get a feel of what it may have been like as an Australian or New Zealand soldier to have been a patient at the World War I, Cottonera Hospital. St Edward’s College have also set up a permanent display of the history of the College when it was known as the Cottonera Hospital.
Għajn Tuffieħa Camp Hospital Għajn Tuffieħa, situated 10 miles directly west of Valletta in a charming valley near the sea, with hills on either side. Għajn Tuffieħa had already been used as a camp in peace time, partly by the army and partly by the navy, being in great request as a summer holiday resort both by officers and men. Australia Hall The area around Pembroke had a number of convalescent camps such as All Saints, St Pauls, and Spinola Camp. Australia Hall was built after the sum of £2,000 (pounds) was raised through donations by the Australian Branch of the Red Cross, at the time, to provide a place of amusement and social activities. Australia Hall was used for shows for the Forces between the wars and also during the Second World War.
[Source: www.malta.embassy.gov.au/mlta/ANZAC.html]