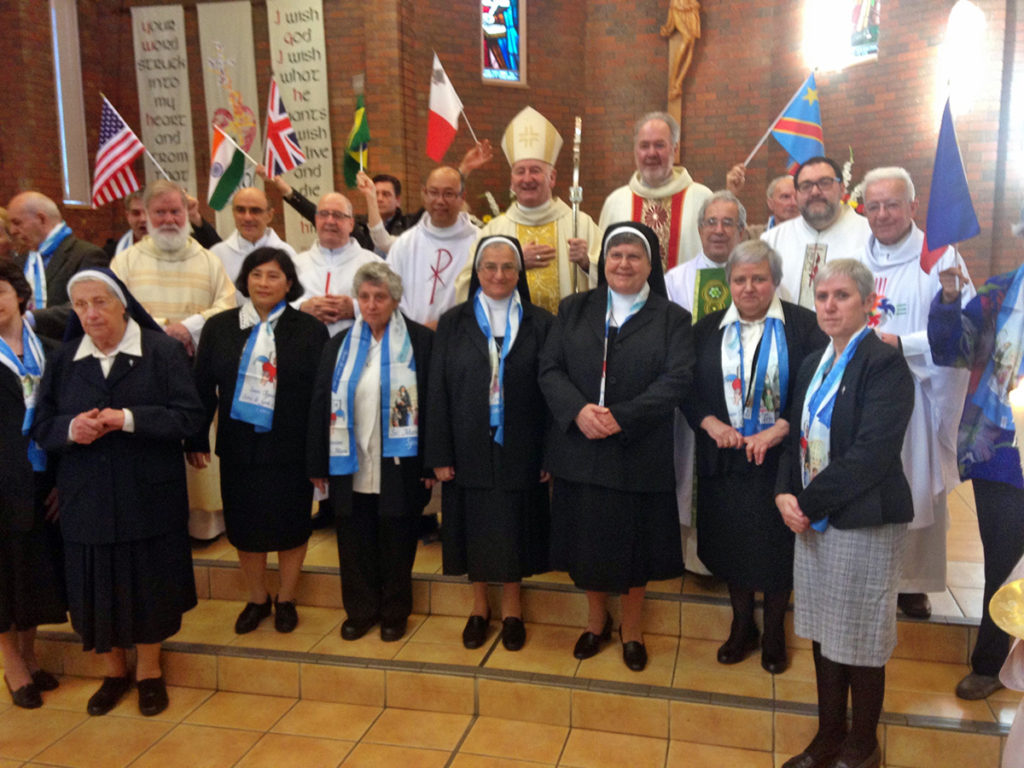 On Sunday 24 September 2017 the Augustinian Sisters, Servants of Jesus and Mary, celebrated 60 years of their religious ministry in Australia with a thanksgiving mass held at St Martin De Porres parish church in Avondale Heights.
The main celebrant was Auxiliary Bishop Terence Curtin who was assisted by eight concelebrants Fr Brendan Hayes, Fr Nhan Le, Fr Anthony Kerin, Fr John Taliana mssp, Fr Denis Carabott mssp, Fr Carm Borg, Fr Ivano Burdian mssp and Fr Edwin Aguis mssp.
Among the congregation present were Ms Joanna Pisani, Consul General of Malta for Victoria; Dr Edwin Borg-Manché, Honorary Consul of Malta for Victoria; and Mr Victor Borg, President of the Maltese Community Council of Victoria. Sr Tessie Bezzina, Rev Mother General of the Augustinian Sisters, was also present.
In his homily, Bishop Curtin spoke about the life and strong faith of the founder of the Augustinian Sisters, the Venerable Maria Teresa Spinelli, who was declared Venerable by Pope Francis in October 2016.
Bishop Curtin then spoke about the mission of the order in Australia, which started 60 years ago with the arrival of five nuns in Melbourne on 25 February 1957, opening their school on 12 March. The initial years were not easy and the sisters in Malta thought that Australia was too hard and the nuns should go back. However, Sr Evodia Bonnici decided that they should persevere and stay. The community in Australia was the first overseas mission for the order and it was followed by missions in the Philippines, England, Africa (Congo), United States, India and Brazil.
Fr John Taliana mssp, Parish Priest of St Bernadette’s, North Sunshine, also addressed the congregation. He thanked and congratulated the order on reaching this beautiful milestone of 60 years of ministry in Australia, and particularly at St Bernadette’s.
“As a migrant myself, I can only imagine the culture shock that the pioneer sisters experienced when they travelled from the small island of Malta to this island continent, They were hard and challenging times. One had to settle down and embrace their new home and also had to run a Catholic primary school, which they continued to administer until recently. We shall always be grateful,” said Fr Taliana.
“You have been a religious presence and witness in our parish. You have preached without ever going to the lectern. You have ministered to the sick by visiting them and administer the Eucharist. You visited homes with the statue of Our Lady and prayed the Rosary with them. You prepare children for the sacraments. Sr Renata has been the parish sacristan which she does with love. We will also be grateful,” he said, before presenting Sr Lorraine Testa with a token gift to the order.
Sr Lorraine Testa then addressed the congregation. She said that that it has been a long but good journey. There were times when the direction may not have been clear. But at all times the nuns kept faithful to the spirit of the order’s founder. She thanked Fr Nhan Le, the parish priest of Avondale Heights, for allowing them to have this important celebration in his parish.
“It’s another way of saying ‘We are here!’ And whether it be through the smile, on the phone, or through letters or through emails, the Augustinian presence will continue in Australia,” said Sr Testa. She thanked all those present for joining in the celebration.
The Augustinian order consists of about 340 sisters from nine countries and working on five continents.
The mission of the Augustinian Sisters in Australia started in 1956 when there was an approach made to Mother General Sr. M. Caterina Galieti to provide the parish of North Sunshine with a team of nuns to be involved in various parochial activities.
So, in 1957 the first community of Augustinian Sisters arrived in Melbourne before their convent had been completed. The Sisters of St. Joseph (Josephites), under the care of Sr. Forrester, at Maidstone, made room in their convent for the first Augustinians for 10 months.
In December 1957, sisters moved into their convent at 59a Westmoreland Road, North Sunshine. Since then, the congregation also had houses in Broken Hill (1964-1970); Frankston (1970-1982); Avondale Heights (since 1986).
In all these parishes, the sisters have been involved in education; pastoral care, sacristan / home visitation to St. Bernadette’s Parish; adult education for those preparing to enter the Church; marriage preparation, catechism classes; organising and leading parish communion services for the many times that there are no priests available for weekly mass; and running retreat days for young adults and parish groups, spiritual direction.