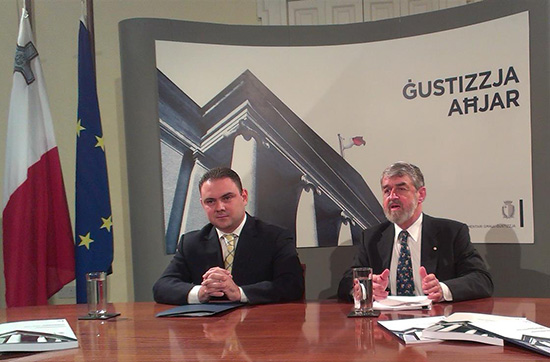 On Friday 11 October, Maltese Parliamentary Secretary Dr Owen Bonnici said that an Australian legal system expert, Prof. Nick Cowdery, is assisting the government in its judicial reform with the aim of delivering justice in a timely manner. Giving an overview of Prof Cowdery’s expertise to journalists at his ministry, Dr Bonnici said that he is a Commonwealth expert on reforms in legal systems who spent a good portion of his life practicing as a defence lawyer in New South Wales.

Dr Bonnici said that, following his practice as a defence lawyer in a city which hosts seven million inhabitants, Prof Cowdrey went on to become a Director of Public Prosecutions. Prof Cowdery retired two and the half years ago as a DPP but continues to give advice to Commonwealth countries on judicial reforms.

Dr Bonnici pointed out that Prof Cowdery presented a paper during a London conference held recently on judicial reforms for small jurisdiction Commonwealth countries to review which inclode Malta. The proposals are being studied and the ones that are appropriate for Malta would be implemented as part of the reform.

Prof Cowdery, who is giving his advice for free, since Malta is a Commonwealth country, has presented a set of proposals to help tackle the backlog of court cases. He had been in Malta since Tuesday. According to Dr Bonnici, Prof Cowdrey had a tough week attending meetings with many stakeholders, during which a number of ideas were exchanged.

Prof Cowdery also attended a criminal sitting in the Magistrates Court before Magistrate Edwina Grima where proceedings were conducted in English since the accused was a foreigner. This helped Prof Cowdery get a feel for how court cases are dealt with in Malta. He also attended meetings with the Chamber of Advocates, the Chief Justice Silvio Camilleri and the Attorney General Dr Peter Grech, among others.

Dr Bonnici pointed out that the professor’s foresight on such issues will help the government steer forward its judicial reform programme. Turning to one of Prof Cowdery proposals, Dr Bonnici said that a particular proposal that should be adopted in Malta is the committal of evidence proposals (known as the compilation of evidence cases).

“It is being proposed by Prof Cowdery that the system currently adopted in committal of evidence cases would be changed in order to reduce the amount of time a case of this sort takes while also safeguarding the accused,” Dr Bonnici said. Such cases can take as long as three years at times to be concluded.

“Reducing the amount of time tied to committal cases will in no way jeopardise the safety of the accused,” Dr Bonnici said.

This proposal, Dr Bonnici said, has been “favourably looked upon by members of the judiciary, lawyers and the Chief Justice”.

Meanwhile, Prof Cowdery said he is privileged to have been asked to participate in Malta’s judicial reform. He pointed out that all countries are cautious over their public expenditure especially small countries. “Therefore, in the case of Malta, we are looking at ways of improving the backlog of cases without having to boost staffing levels for instance,” he said.

Asked by a Malta Independent journalist how one can improve the backlog of cases, when staffing will not be increased due to financial limitations, Prof Cowdery said that one can look at ways how to drive the staff to be more efficient in their work by changing certain ‘traditional’ processes. He said that one important factor is to remove existing psychological barriers resisting change.

Turning to the meetings he had over the past week, Prof Cowdery said they looked at a whole range of reforms, adding that he is not there to dictate but to exchange suggestions with stakeholders.

Referring to a particular issue that cropped up in Australia many years ago, where police were accused of fabricating interviews concerning criminal suspects, Prof Cowdery said that in order to tackle the problem, interviews with suspects started being filmed. “At first, members of the police force were up in arms, stating that nobody would confess to a crime if recorded,” he said.

“Ironically, it was the police who later started to strongly support the measure since it protected them from any allegations made on ill-treatment of suspects or fabrication of evidence claims,” Prof Cowdery concluded.

Prof Cowdery’s report covers issues of particular relevance to small Commonwealth jurisdictions, which possess some characteristics that distinguished them from larger and more prosperous jurisdictions and which can aggravate the backlog problem.

Such features include the smaller cohorts of police, prosecutors, lawyers, judges and justice support operatives, requiring managers to prioritise work and making them more vulnerable to the effects of illness or other absence from duty in any of those areas by imposing additional work pressures; fewer resources in the law reform mechanisms and agencies few resources and tighter budgets, among other issues.