Divorce law expected to be passed by July 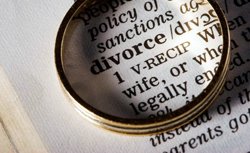 Speaking after a three-hour meeting with government MPs yesterday, the Prime Minister Dr Lawrence Gonzi is reported to have assured his MPs that the divorce Bill would be passed by July. It is expected that the divorce Bill to be presented in Parliament would be further refined through a series of proposed amendments. Dr Gonzi said that the matter merited a special parliamentary procedure and for this reason the government would be tabling a motion in Parliament to propose an appropriate process for its consideration.

In order to manage the process, the two major parties represented in Parliament each established a committee to propose amendments to the Bill. The government parliamentary group yesterday set up a committee consisting of two anti-divorce MPs, Deputy Prime Minister Dr Tonio Borg and Family Minister Dolores Cristina, two moderate MPs, Parliamentary Secretary Dr Mario de Marco and backbencher Dr Francis Zammit Dimech and pro-divorce backbencher MP Jesmond Mugliett. At yesterday’s meeting the group agreed that the spirit of the referendum question must be strictly complied with, but it was also acknowledged that the Bill would have undergo some fine-tuning. Deputy Prime Minister Dr Tonio Borg had proposed the setting up of the committee in light of some fear expressed by some backbenchers that some MPs might try to propose amendments that went against the referendum question.

During the meeting the issue of whether the Nationalist Party should revise its anti-divorce stand was also discussed. Finance Minister Tonio Fenech indicated this was something which would “eventually” have to be addressed, but MP Edwin Vassallo disagreed. The Prime Minister said this would be discussed at a later stage.

According to a report published in The Malta Independent Online last Sunday, a total of 37 Members of Parliament have declared their intention to vote in favour of divorce legislation in the House. This conclusion resulted from an exercise that the newspaper carried out last week. The legislation needs a minimum of 35 votes, under normal circumstances, to be passed. That threshold has already been passed, despite a number of MPs being non-committal or having been unreachable by the time of going to print last Saturday.

By 9pm on Saturday, five MPs had declared a ‘no’ vote, five declared their intention to abstain from the vote, nine were still undeclared and 13 were unreachable. As expected, the vast majority (29 of 34) of Labour MPs declared that they would be voting in favour of divorce legislation, with just one abstention and one ‘no’ vote. Only three Labour MPs were unreachable on the subject.

Nationalist MPs’ votes were, on the other hand, more divided with eight definite ‘yes’ votes, four ‘no’ and four abstentions. The eight undeclared PN MPs mainly cited a wish to see what form the end legislation would take following amendments in Parliament, while 11 were unreachable.

Of those 11 who were not able to be contacted, five were ministers and three were parliamentary secretaries. The only minister to have declared a vote was Austin Gatt with his consistently resounding ‘no’, while parliamentary secretaries Mario de Marco and Chris Said have both declared their intention to vote in favour. Additionally, PN Whip David Agius has also pledged a ‘yes’ vote.

In a statement issued this morning in Valletta during the ‘Sette Giugno’ celebrations, the green party Alternattive Demokratika (AD) called on members of parliament who do not approve the divorce referendum result to resign.

Mr Michael Briguglio, AD Chairperson, said that “the issue is simple. Over 53% of voters want the introduction of divorce in Malta. Parliamentarians, who did not have the courage to take a decision on divorce and shifted the responsibility onto the people through a referendum, should stand by the result of the referendum. Those who are not ready to vote in favour should resign. Any manoeuvring is simply unacceptable. Alternattiva Demokratika will be carefully analysing the situation and will make sure that parliamentarians do not take the Maltese electorate for a ride.”

The divorce Bill is yet to be published.