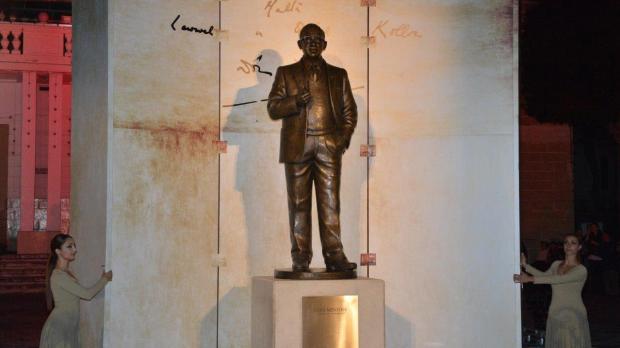 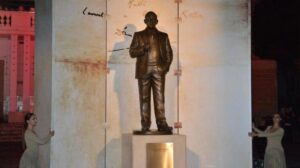 NEWS     The monument of Malta’s former Prime Minister Dom Mintoff was unveiled at Pjazza Paolino Vassallo in Cospicua, Malta yesterday, on the eve of the 40th anniversary of Republic Day. Its design by Noel Galea Bason was chosen from a total of 17 designs submitted.
Addressing a generous crowd, Prime Minister Dr Joseph Muscat noted that Dom Mintoff took giant steps in the making of Maltese history. He described Mr Mintoff as a Maltese man of a global stature who managed to divide the past from the future. He made his voice heard, chose his mission and implemented what he believed in.
Dr Muscat said: “Dom Mintoff induced faith in the Maltese people. He eradicated the worst form of poverty.  It was here, in Bormla, where it all started – back when Mintoff himself had no right to vote. He was always assertive, and sure of where he’s headed. Perhaps he was not understood by everyone at the time, but still, he dreamed, and he strived to achieve those dreams. He transformed the Labour Party into a strong movement. He was ready to lose elections, as long as it was for the best of the country. International relations flourished, and are still sustained nowadays. It was Dom Mintoff who introduced the social system as we know it today – housing estates, pensions, labour. This is where it all started.”

Dr Muscat said that Mintoff was determined and brought about the minimum wage, pensions, children’s allowance, bonuses for workers and pensioners, maternity leave, free healthcare, the decriminalisation of homosexuality and adultery, Air Malta, Enemalta, banks and industrial sector. He gave the Maltese hope for the future. He also made Malta a Republic giving the country a Maltese head of state. He worked the independence acquired a few years earlier for the country to become economically independent and created new relations with many countries that invested in Malta including China, which relationships were still bearing fruit.
The Labour Party’s deputy leader, Toni Abela, said that with all the controversies he led, Mintoff served as a huge influence for the Labour Party. “Leader the party for almost forty years, Dom Mintoff changed Malta to what we know it today. ; he created structures which were later perfected, but he was the founder of such vital importance,” Dr Abela said.  “Mintoff was not against the Church – it was the intervention in state affairs that he disliked. He was rather against injustice, and wealth not being distributed fairly. Mintoff believed in a secular republic state, one which gave more dignity to the Maltese people.
Deputy leader Toni Abela said that Mr Mintoff worked with George Borg Olivier although the two disagreed on certain issues. Mr Mintoff was a European product and not against Europe. What he was against, Dr Abela said, was for European countries to dictate the foreign policy of small countries.
Yana Bland Mintoff, the former Prime Minister’s daughter, a political activist herself, says that her father “did not care much for monuments; he cared about giving everyone a chance, and strived for better standards of living for all. Celebrating this moment on the eve of the 40th anniversary of Republic Day sends a message – to treat everyone in an equal manner.”
Claire Xuereb Grech, writer of L-Elf Lewn ta’ Mintoff, said that more than anyone else, Mintoff understood the changes Malta fell short of. “Today we dream of having a leader like him – a dominant personality, one who knows how to offer comfort, but also correct. In many ways, there are still people who lack to understand his ways, and how relevant they were, and would still be in the future,” Mrs Xuereb Grech said. “It was Mintoff who taught us that Malta is as capable as other countries, and strived to diminish that sense of inferiority.”
A brief profile of Dom Mintoff
Mintoff was born in Bormla (Cospicua) in 1916, three years before one of Malta’s most historical moments, including the Sette Guigno in 1919. He attended the Archbishop’s Seminary before enrolling at the University of Malta where he graduated with Bachelor of Science,  and, later, as an architect and civil engineer in 1937.
Mintoff was Malta’s longest serving politician, elected every time between 1947 and 1998. He was still active in the run-up to EU accession, against which he campaigned as part of Front Maltin Inqumu in 2003. He undermined Paul Boffa’s government in the 1940s. Months after taking office, Mintoff started negotiations with Lord Carrington, leading to the closure of the British military base in March 31, 1979 – Freedom Day. His political approach was completely different and much more confrontational than that of his predecessor.
He visited China, North Korea, and Romania as well as Libya, while at the same time; he strived to protect Malta from sinking into communism and to maintain Malta’s neutrality. “Each and every worker has the right to work,” he reiterated time and time again. He introduced major reform in the social welfare systems.  Meanwhile, Mintoff’s relationship with the Catholic Church worsened, leading to an interdiction by the Church.
Dom Mintoff passed away on August 20 of two years ago, at the age of 96.
[Sources: www.timesofmalta.com and www.independent.com.mt]
Previous
Australia now known as most inhumane, uncaring and selfish of all wealthy countries – Malcolm Fraser
Next
Gejtu Pace awarded ‘Midalja għall-Qadi tar-Repubblika’