NEWS   Yesterday the Hilton Hotel in St Julians, Malta was the venue for the long-awaited book launch of former Maltese prime minister and President Emeritus Dr Eddie Fenech Adami’s autobiography, Eddie: My Journey.  Among the hundreds present for the occasion were several former political adversaries. The President of Malta, Dr George Abela, Prime Minister Dr Joseph Muscat and Leader of the Opposition and PN leader Dr Simon Busuttil were among the guests in attendance. Maltese celebrity Tenor Joseph Calleja sang during the evening.

The evening recalled the life and times of a key protagonist in Malta’s political history for more than half a century. Dr Fenech Adami turned 80 last week. The autobiography, which is recounted in the first person, covers all the major events in Dr Fenech Adami’s long political career.
In an article published today on the Times of Malta website, a promo video for the autobiography was made available for viewing.
Dr Fenech Adami admitted that he had not read through the book co-authored by editor-in-chief at Times of Malta Steve Mallia prior to its publication, but having done so now, he is thoroughly pleased with the end result.
In a short introductory video traversing his long political career, Dr Fenech Adami had the 800 guests laughing when he recounted a meeting with former Italian Prime Minister Silvio Berlusconi.
“Berlusconi turned to my wife Mary and in Italian asked her: ‘Tell me, how does your husband make love to you?'” 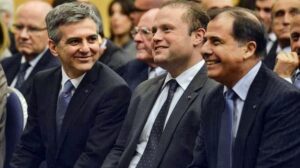 As expected, one of the highlights of his political career was Malta’s accession to the EU, which Dr Fenech Adami drove to a successful conclusion as Prime Minister and leader of the Nationalist Party.
He recalled that it had been “only logical” for him to call a general election soon after winning the EU referendum in 2003, despite scepticism by then European Commission president Romano Prodi.
He recounted the moment when just after the referendum he informed Mr Prodi that he would be holding an election. Mr Prodi’s reply was: “Are you mad?”
“It was only logical for me to hold an election because I believed the people would not be changing their mind in a couple of weeks and that meant I would win,” he said, adding his modus operandi had always been based on logic.
Dr Fenech Adami was surprised by a live Skype interview with Mr Prodi, in Bologna, who confirmed his fear at the time that Malta’s situation could damage the European enlargement project.
“Anything that could put the EU enlargement project in danger was a problem. But I had great confidence in Fenech Adami and in the end everything worked out well,” he said.
It was a brief exchange between the two former prime ministers and friends.
Dr Fenech Adami underlined Mr Prodi’s efforts at the time to ensure Malta made it into the EU and obtain a deal that best suited the country.
[Sources: www.timesofmalta.com; www.independent.com.mt 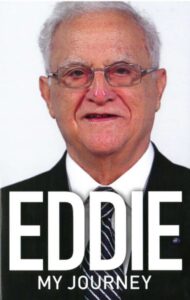 The book is published by Progress Press and all proceeds from its sale will go to Dar tal-Providenza in Siggiewi, Malta. The book may be ordered online from the following websites:
http://www.bdlbooks.com/biographies-and-memoires/4625-eddie-my-journey.html
http://maltaonlinebookshop.com/product/eddie-my-journey/


———————————————
Brief information about Dar tal-Providenza
Id-Dar tal-Providenza was founded by Mons. Michael Azzopardi in 1965 with the aim of offering a home with a warm and family-like environment for persons with disabilities who for some reason or another cannot stay living with their family. Since than Id-Dar tal-Providenza has supported its residents to participate in and enjoy the quality of life within the community.
Today Id-Dar tal-Providenza is made up of five residences: Villa Monsinjur Gonzi, Villa Papa Giovanni and Villa Papa Luciani. It also includes two other residences, called Żerniq in Siġġiewi and Akkwarell in Qawra.
At the moment, Id-Dar host approximately hundred persons between the ages of fourteen and eighty years. It also offers respite services on a regular basis to families of persons with disabilities, thus offering them support to enable the disabled family member to continue to live within their family.
For more information visit their website at http://www.dartalprovidenza.org/
Previous
Maltese politics from afar
Next
Marie-Louise Coleiro Preca tipped to be the next President of Malta