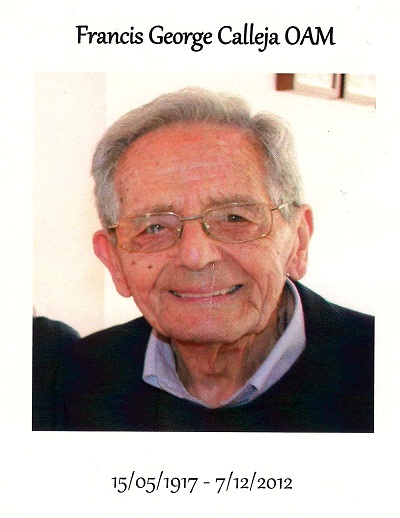 It is with sorrow that we announce the passing away of Frank Calleja on Friday 7 December 2012 aged 95 years.

Frank has contributed significantly to the Maltese community in general and to the MCCV in particular. From the very beginning he provided a great deal of assistance to many single men who came out from Malta, including providing them with a dinner on Saturday evenings and helping to obtain employment for them, often acting as interpreter, and in general ensuring that they settled successfully.

As a delegate to the Maltese Community Council of Victoria, Frank made a considerable contribution towards providing social and welfare services for the Maltese and their friends in the state of Victoria. He used to spend quite some time behind the telephone at the Maltese Centre answering queries from the community.

For some years he was a member of the executive of the MCCV in charge of its welfare programme.

For several years he was President of La Vallette, a very active organization. He was also an active member of the George Cross Soccer Club Committee

He participated in the MCCV annual fete which provided funding for welfare services as well as raising funds for the establishment of the Maltese Community Centre in Parkville. He also assisted in organising an overseas trip which raised considerable funds for the construction of the Centre.

As part of his association’s activities Frank organised a Pensioners and Retiree group which meets regularly each week at premises he was able to obtain from the local council. Frank organised regular activities for the group and kept an eye on aged members who may require assistance from time to time.

Frank was awarded the Manoel de Vilhena Award (1998) “for outstanding contribution in community services of the Maltese”, the Victorian Award “for meritorious service to the community” (2005) and the Order of Australia Medal (2006) “for services to the Maltese Community of Melbourne through the activities of the Maltese La Vallette Association”.

A few months ago, Frank was awarded the newly-established MCCV Community Award for his contribution to Welfare services.

Frank and his late wife Daisy have been excellent role models for young community members.