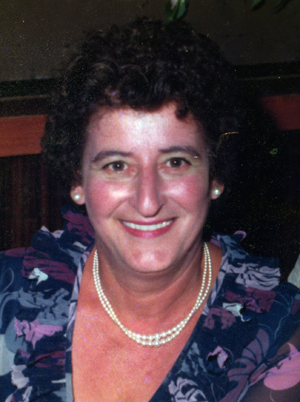 It is with the deepest regret that we announce the passing away of Mrs Nellie Borg on Sunday, 28 August 2011. On behalf of the affiliated Maltese associations, the President and Executive Committee of the Maltese Community Council of Victoria extend their sincere condolences and deepest sympathies to their colleague Paul Borg, MCCV Treasurer, and his family as well as to Nellie’s daughter, Madeleine, and her side of the family on this sad loss.

Nellie was the fifth surviving child born to Carmelo and Melita Borg of Blanche Street, Sliema. She attended Sliema Primary School until the age of 14, when she assumed her role of assisting with the running of the family household – specifically, Nellie attended to the laundry duties on behalf of the family, which included 10 brothers and sisters.

Nellie migrated to Melbourne Australia in January 1962, at the age of 26 years. Six months later, Nellie gave birth to her only child, Madeleine.

In 1981 Nellie married Paul Borg who has served the Maltese Community Council of Victoria as Treasurer for almost fifty years. Nellie herself has been a quiet assistant to the community, aiding Paul in the background on many of the community projects undertaken over the years.

Nellie’s daughter Madeline, and stepchildren Darryn, Simon, Tracey and Joanne will fondly remember a tender hearted woman, who always wore a smile and was forever keen to play a hand of rummy or go to bingo. Her 17 grand children and 5 great grandchildren will particularly miss their Nanna’s cooking, endless supply of sweeties and little games.

Like many Maltese, Nellie suffered from diabetes and was insulin dependent. Recently, she endured a second operation to remove a toe, which also led to her suffering a small heart attack. After spending the next 3 weeks in hospital, she returned home, only to be taken by ambulance to intensive care after she stopped breathing. 21 days of intensive care followed and a number of operations. Nellie passed into God’s care during prayer with her family by her side.

Yesterday St Paul’s Church in Coburg was packed for her funeral as the Maltese community led by the Consul-General for Malta in Victoria, Mr Charles Mifsud, and the MCCV President, Professor Maurice Cauchi, and other community leaders paid their last respects.

Nellie will be sadly missed but will never be forgotten by all who knew her.