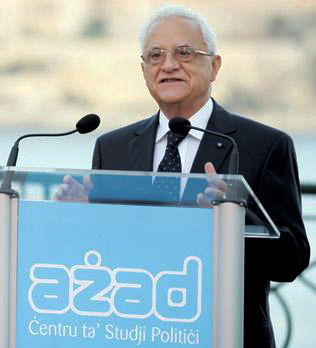 On Sunday 27 May 2012 President Emeritus Dr Eddie Fenech Adami was honoured with the award of the prestigious Robert Schuman medal for his contribution in taking Malta into the EU. European People’s Party (EPP) Chairman, Mr Joseph Daul, presented the medal to Dr Fenech Adami during a touching ceremony at the Upper Barrakka Gardens in Valletta.

A grateful and emotional Dr Fenech Adami said he would cherish the medal because he lived through the times of Robert Schuman, a Christian Democrat and former French Prime Minister who died in 1963, regarded as one of the EU’s founders.

Dr Fenech Adami is the second Maltese recipient of the award following the award to former President and Minister of Foreign Affairs, the late Professor Guido de Marco in 2007. Dr Fenech Adami was nominated by Malta’s two EPP MEPs, Simon Busuttil and David Casa, and the former noted that the nomination was accepted immediately.

Robert Schuman was France’s foreign minister when he proposed the setting up of the European Coal and Steel Community (ECSC) in a declaration issued on 9 May, 1950, a day now celebrated as Europe Day. The ECSC, set up less than a year later, is the first of the three European Communities – the European Economic Community and the European Atomic Energy Community are the others – which eventually became the European Union. Commonly named as one of the ‘Founding Fathers’ of European unity, Mr Schuman was the architect of the famous Schuman Plan which laid the foundation for a supranational European community that progressively developed into the European Union.

“With humility I recognised that I did not play a small part in ensuring Malta’s full and active participation in the EU. I am proud of what I have done… what we managed to do together,” said Dr Fenech Adami in his acceptance speech.

While thanking his late wife for her unconditional support during tough political times, Dr Fenech Adami paid tribute to his PN colleagues and recalled how the party never doubted its vision. He pointed out that he ended all his political speeches with an appeal for values particularly Christian values, “which distinguish this small country”. “I cannot claim to have a life of active political participation ahead of me but I assure you that I observe everything with interest and I want our country to keep moving on this same path to achieve even more prosperity,” he said.

Keynote speaker Dr Louis Galea, now audit dean in the European Court of Auditors, recalled the PN’s efforts to etch out a future for Malta during the “foggy” days of socialism. “If Robert Schuman was the founding father of the EU, Eddie Fenech Adami was the founding father of Malta in the EU,” he said, praising Dr Fenech Adami’s vision and stamina, which ultimately led to consensus in Malta over EU membership.

Dr Galea appealed for people to remember the EU’s achievements and ask important existential questions about the relevance of the union today.

While stressing the importance of the separation of Church and State, Dr Galea argued that it was wrong for Christian politicians to pose for rites and rituals and then act with a secular vision of the universe.

Mr Joseph Daul, who was in Malta in 2007 to award the same medal to another Maltese President Emeritus, the late Guido de Marco, praised Dr Fenech Adami for helping bring Malta out of the socialist era where democratic values were trampled upon.

“Success is born out of truth”, Charles de Gaulle once said. Chairman Daul used this quote to highlight Eddie Fenech Adami’s role in persuading the Maltese that EU membership is good for Malta and good for them. “You did it by telling the truth”, said Joseph Daul. “We haven’t forgotten the Labour Party’s opposition to EU membership.”

“Dear Eddie, your vision, your actions have left an indelible mark not only in Malta but also throughout Europe. You epitomise the best of Malta, you highlight the European nature of your country. As a Frenchman, and especially as a European, I feel at home here in Valletta, just as I know that the Maltese feel at home anywhere in Europe. President, this would not have been possible without your energy, without your vision, and without your forcefulness”, said Joseph Daul MEP.

Simon Busuttil MEP said that Eddie Fenech Adami distinguished himself for his patience and resilience at a time when political violence was rife and democracy was on the brink. “It is truly impressive that one man could, single-handedly, do so much for his country, in bringing about peace, human rights, economic prosperity and a place in the European family of nations”, he said.

The event was organised by AZAD, the Academy for the Development of a Democratic Environment.

The Schuman Medal was introduced in 1986 by the Group of the European People’s Party. The medal pays tribute to public figures who, like Robert Schuman himself, made outstanding contributions to European integration and advanced the cause of peace and human values through their public activities and personal commitment.