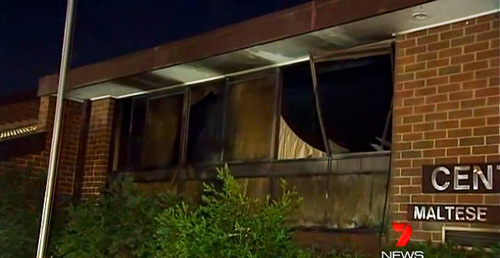 The Maltese community in Victoria woke up this morning to the terrible news of an overnight fire that destroyed the boardroom in their Community Centre on Royal Parade, Parkville, an inner suburb of Melbourne. The Metropolitan Fire Brigade was called to the blaze about 1.30 am (AEST) this morning and managed to contain the fire in the one room.

The precise cause of the blaze is not known. A lit candle in the boardroom had started a small fire at around 8.30 pm on Thursday evening but this was extinguished. It would appear that some embers left from that fire may have reignited, leading to the blaze.

Four MSSP priests living in the presbytery that is adjacent to the Centre awoke to the sirens  of the fire-trucks and the banging on the door of the chapel which is right next to the boardroom as the firemen thought they might get a quicker access to the fire through the chapel door. MCCV President Professor Maurice Cauchi attended the scene in the early hours to inspect the damage.

Several Maltese volunteers were able to clean up the other parts of the Centre in time for the afternoon service, ensuring that the Maltese community could continue with the Easter program of religious activities. At 3.00 pm Fr Edwin Agius MSSP conducted the Good Friday service in the main hall of the Centre attended by a number of community members, including the Consul-General Mr Charles Mifsud and Mrs Mifsud, Honorary Consul and MCCV PRO Dr Edwin Borg-Manché and Mrs Borg-Manché, MCCV Vice Presidents Mr Victor Borg and Mr Gejtu Deguara and Mrs Deguara, and MCCV Wefare Director Mrs Rosemary Attard and Mr Attard.