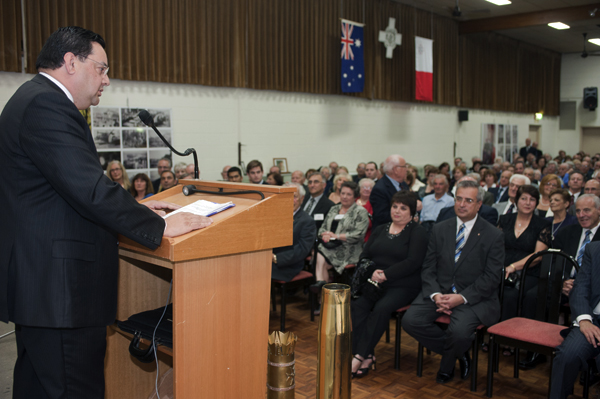 On Saturday 21 April about 400 people packed the hall at the Maltese Centre in Parkville to commemorate the 70th anniversary of the Award of the George Cross to the people of Malta at a reception organised by the Consul-General of Malta in Victoria, Mr Charles Mifsud, and the Malta GC committee that he chaired.

The evening commenced with the singing of the Maltese and Australian national anthems. Mr George Saliba, MC for the evening, introduced the Consul-General of Malta, who welcomed the distinguished guests. These included the Hon Mr Craig Ondarchie MLC (representing the Premier of Victoria, the Hon Mr Ted Baillieu, and the Minister for Multiculturalism and Citizenship, the Hon Mr Nicholas Kotsiras), the Speaker of the Legislative Assembly the Hon Mr Ken Smith, the President of the Legislative Council the Hon Mr Bruce Atkinson MLC, the Secretary of the Victorian Parliament’s Friends of Malta Group the Hon Mr Telmo Languiller MLA, the Hon Natalie Hutchins MLA.

Also present were the MSSP Regional Provincial in Australia, Fr Mario Zammit; the President of the Maltese Community Council of Victoria, Professor Maurice Cauchi; the two MCCV Vice Presidents, Mr Victor Borg and Mr Gejtu Deguara; other members of the MCCV Executive Committee and the Presidents and committee members of several MCCV-affiliated associations. Mr Mifsud provided a brief background and statistics about Malta’s sacrifices during the Second World War and the award of the George Cross by King George VI on 15 April 1942. There were 3,340 air raids on Malta for a total of 2,357 hours and 6 minutes. 30,027 civilian homes were either completely destroyed or severely damaged, said Mr Mifsud.

The Maltese defenders, some of whom were present in the audience, gallantly manned the anti-aircraft guns shooting down not less than 454 enemy aircraft. The RAF shot down 790. Around 1,500 Maltese civilians lost their life in the conflict. Malta was and still is the most bombed place on earth. The people of Malta suffered hunger and devastation. The George Cross was the highest award that could be bestowed on civilians, said Mr Mifsud.

Mr Saliba then invited the Hon Craig Ondarchie to launch the special exhibition of war-related artefacts and photographs showing graphic images of Malta during the Second World War. In launching the exhibition, Mr Ondarchie said that it was an honour for him to represent the Premier of Victoria and the Minister for Multiculturalism and Citizenship at the George Cross Award commemoration. Mr Ondarchie said that in commemorating the 70th anniversary of the George Cross to Malta, we commemorate the sacrifice made by allied and commonwealth forces in World War II during the very tragic siege of Malta. The George Cross Award was made to Malta for the great strength and courage that the Maltese displayed during the most testing and dangerous of times.

“Commemorations and celebrations, such as this one, ensure that the meaning of the siege of Malta is not dismissed or forgotten. We remember the sacrifices made by many in the struggle against the military forces. In doing so, we also look to the future. We challenge ourselves to embody the values for which they fought. We dedicate ourselves tonight to carry forward the legacy of freedom, democracy and the victory that Malta represents,” said Mr Ondarchie.

Mr Ondarchie said that “today we measure ourselves against the enormous sacrifice that those before us have made. We also renew our commitment to a free and prosperous society in which we live. We also dedicate ourselves to teaching the next generation about our history, our culture, our values and our traditions. The next generation cannot understand where they are going, unless they understand where they come from.”

Mr Ondarchie commended the Consul-General of Malta and the entire Maltese community of Victoria for creating and supporting such a moving commemoration of the past and such a fitting dedication to the future.

“Here in Victoria we are blessed by a very strong Maltese community. Across so many spheres of society, the Maltese people’s contribution to a positive and considerable community has been enormous, and we thank you for that,” said Mr Ondarchie. “That contribution has been characterised by hard work, devotion to family and a commitment to our community. Indeed, when I talk to my Parliamentary colleagues about how beautiful Malta is, as a country, they say to me that the people of Malta are more beautiful.” “The Victorian Government encourages all community groups to maintain, develop and share their cultural heritage with others and, in this, the Maltese community sets an enormous and wonderful example. I commend the Maltese community for its great contribution to the cultural diversity and harmony in Victoria,” said Mr Ondarchie, before officially declaring the exhibition open.

The Exhibition will remain open at the Maltese Centre until Sunday 29 April. Mr Saliba then announced the winners of, and participants in, the competition that the organising committee held with the theme of “Malta and the Award of the George Cross”. There were two entries in the multimedia section and six entries in the essay competition. Mr Saliba thanked the judging panel which consisted of Professor Maurice Cauchi, Dr Lou Drofenik and Mr Joe Asciak. The winning entries were submitted by Miss Isabella Seychell for the multimedia section and Mr Paul Jesmond Sapiano for the essay section. Mr George Portelli, the representative of the Bank of Valletta in Australia which partly sponsored the winning prizes, presented the prizes to the winners. Mr Mifsud presented participation prizes to t
he other competition entrants.

The final part of the evening consisted of the showing of the excellent documentary movie called Heroes in the Sky by Maltese director and producer Engelbert Grech. The movie related the story of the pivotal role that Malta played in the Second World War when the islanders came very close to starvation and the island being bombed out of existence. The moving story was told from the perspective of the air battles that took place over Malta and the heroism displayed by several extraordinary pilots who came from the UK, Canada, the USA, Australia and New Zealand and achieved the impossible and the miraculous against all odds.

Finally, Mr Saliba thanked the sponsors, without whose generosity the events would not have been such a success. The following is the full list of sponsors: